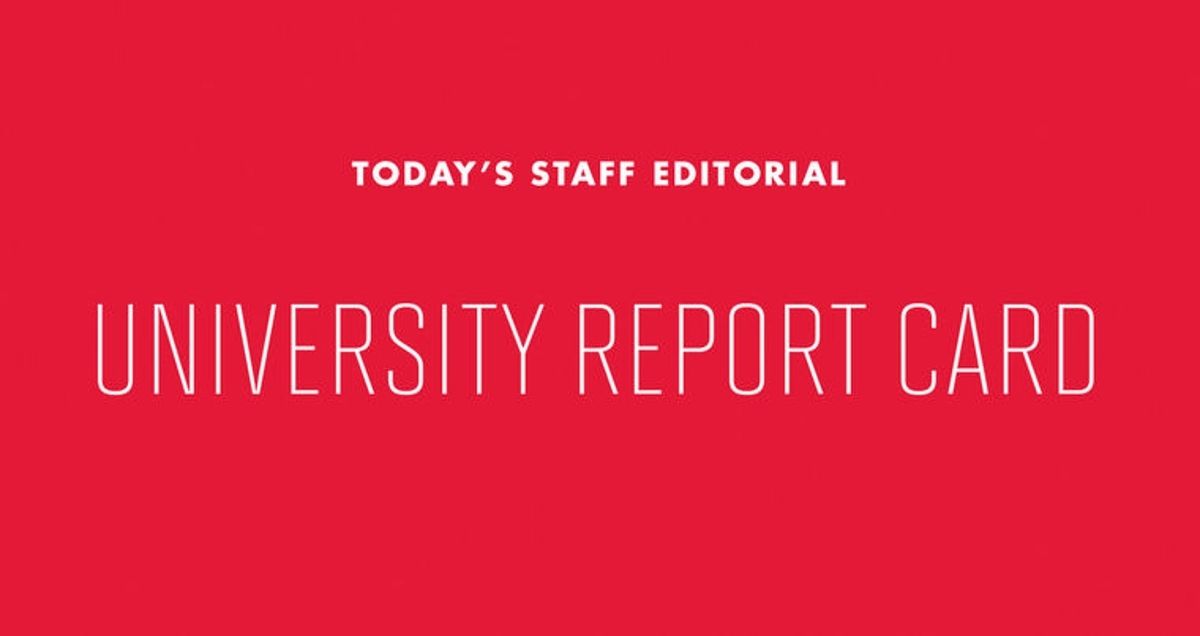 In a year ruled by confusion and fear, university President Darryll Pines and his nascent administration did surprisingly well. Their stringent COVID-19 safety measures — including keeping almost all courses online, changing the dining halls to a takeout system and requiring testing every other week for students on the campus — prevented a significant outbreak of the virus on the campus, even if many of their decisions felt reactive.

But several major lapses stand in the way of a stronger grade for this university’s administration. While the university generally worked hard to protect students, some low-wage workers reported unsafe working conditions — and the administration refused to negotiate with the union on the issue. Despite a massive student movement, the administration wouldn’t add a pass/fail option for the fall semester, and only implemented a partial pass/fail approach in the spring. And many longtime issues remain unaddressed, including the university’s relationship with defense contractors, the stagnation of Black and Hispanic enrollment representation and the failure to wipe the names of racist historical figures off university property.

In all, this appears to be a positive step for this university’s administration. However, Pines must prove that these changes are more than performative. The university must follow through on its commitments and continue to serve students beyond the pandemic.

This year’s SGA slunk by with little fanfare or drama, managing to do surprisingly well given the ongoing pandemic. The body made several notable, positive moves: It submitted a bill to the Maryland General Assembly that proposed adding a layer of student review to the way the University System of Maryland allocates student fees — which was prudent, given that it’s students  paying those fees. It allocated $350,000 toward supporting students’ financial needs through the Student Crisis Fund, which was part of about $1 million the body allocated to student services in total. It began to build bridges with Latinx organizations on campus; and with a legislature entirely led by students of color for the first time in the Student Government Association’s century-long history, it established its first-ever Asian, Pacific Islander and Desi American caucus in the fall, bringing wider representation to its deliberations.

But it wasn’t all good. Sure, this year’s election lacked drama — but it also lacked a second party. Despite the body’s unanimous support for a bill urging university administration to reconsider its decision not to offer pass/fail grading options in the fall, no such reconsideration occurred. And, having learned nothing from last year’s last-minute veto, the SGA spent nearly eight grueling hours amending its bylaws during its final session.

Overall, though? Not bad. Maybe there’s hope for the SGA yet.

This year, the College Park City Council focused heavily on housing and business development. The council approved new housing plans along Knox Road, and it seemed that both the council and housing developers cared somewhat about ensuring affordable rent prices for both students and local businesses. With the destruction of existing housing making way for the construction of much more, we’ll see how committed the council is to ensuring affordable housing for its constituents and avoiding further displacement of local businesses.

Despite it not being a usual election year for the council, the body saw some turnover with the resignations of former city manager Scott Somers and former District 2 council member P.J. Brennan. In November, Llatetra Brown Esters won the election to replace Brennan, and Natasha Hampton was named as Somers’ replacement in May.

The council also created a steering committee to approach restorative justice in the city’s Lakeland community — a historically Black neighborhood that suffered under a city-approved urban renewal plan in 1970, which forced many residents to leave the area.

After last year’s unruly social gathering debacle, the council found that as of October there had not actually been any violations of the ordinance. However, the council voted to penalize ordinance violators without a warning in the case of an emergency. This absurd decision made no sense as the pandemic limited opportunities for gatherings or parties. There were no violations of the ordinance, so why continue to penalize students for transgressions they haven’t committed? This ordinance continues to drag the council down, and points to a continued disconnect with students.

Throughout the past year, members of the GSG have advocated for actions and policies that address important topics.

One such topic was the need to protect international students from federal policies that threatened their ability to attend this university. In September, the Graduate Student Government created an International Student Affairs Committee.

In November, the body passed a bill to fight marginalization of students from underrepresented communities in this university’s physics department.

The advocacy for students didn’t falter throughout the year, earning the governing body a high grade from this editorial board. During a town hall with university administrators in February, members continued to press for action to support international graduate students. In the spring, the body pressed for improved parking signage and ticketing across this university’s campus — urging the Department of Transportation Services to clarify whether or not students who work as graduate assistants can park in spaces designated for faculty and staff.

The consistent advocacy for international students, as well as the graduate student experience on this university’s campus, shows cohesive goals and agendas set by the governing body that aimed to serve the community of students it represents both near and far from campus.

The Department of Resident Life was no friend to students this year. Quarantine units set up by the department to house those who contracted COVID-19 were, by many accounts, dismal: Students had frantic moving experiences followed by flooded floors, sewage leaking up from shower drains and strange meals that cost students without a dining plan $21.25 a day.

All dorm rooms became singles for the year, except suite and apartment-style dorms. But that didn’t stop the coronavirus from spreading through Denton Hall — or later, La Plata Hall. It didn’t stop quarantine housing from filling up halfway by late September, prompting the university to consider adding more dorms to its quarantine and isolation housing effort.

All of this, of course, is awful icing on the disastrous cake that was the university’s failure to adequately heed the cries of students trapped in lease agreements at South Campus Commons and Courtyards apartment complexes. The eventual agreement between this university and the company that manages the apartments resulted in measly measures: Students got rent forgiveness on just five months of their 12-month leases during a majority-virtual, virus-ridden, anxiety-filled year.

It wasn’t all awful. Construction on the new dorms continues to plod along — the buildings will be named after former students who broke racial barriers. Dining halls implemented a grab-and-go model that kept students fed, and Dining Services managed to debut some new dishes for tasting in the spring semester.

Tastings and continual construction aside, though, Resident Life has — yet again — proven it doesn’t have students’ best interests at heart.

Angela Mecca, editor in chief, is a senior journalism major. She can be reached at diamondbackeditor@gmail.com

Sahana Jayaraman, deputy managing editor, is a senior journalism and criminology and criminal justice major. She can be reached at sahana@terpmail.umd.edu

Jake Foley-Keene, opinion editor, is a senior government and politics major. He can be reached at opinionumdbk@gmail.com

Maya Rosenberg, opinion editor, is a senior journalism and public policy major. She can be reached at opinionumdbk@gmail.com