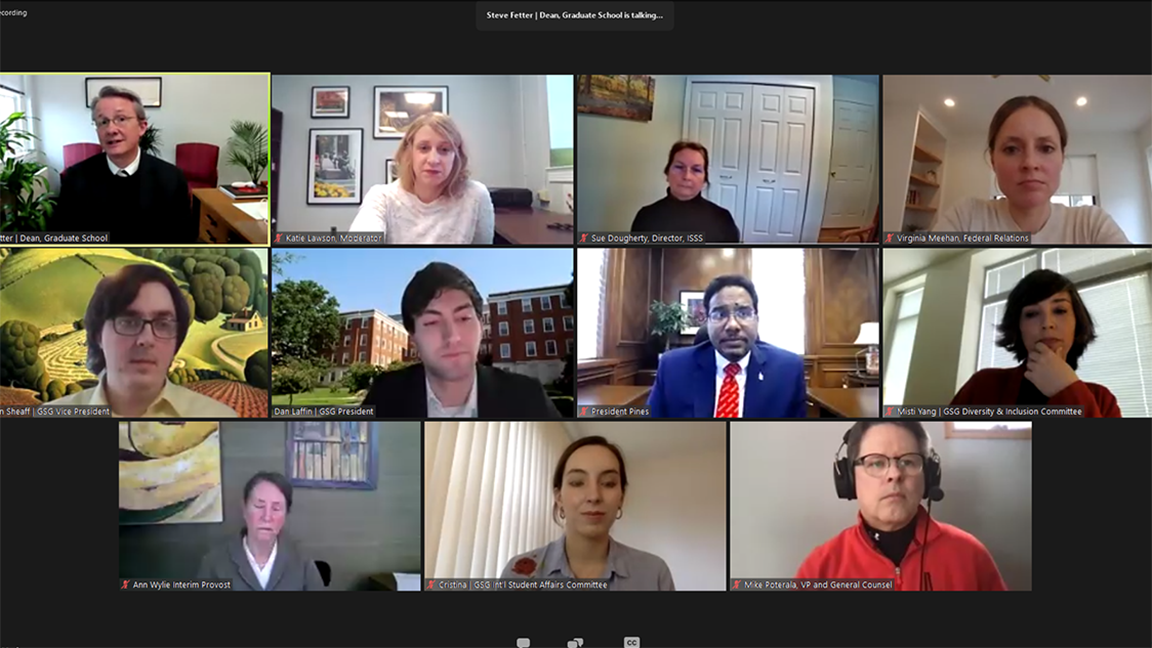 The town hall, which was moderated by Katie Lawson, a university spokesperson, allowed graduate students to submit questions ahead of time. The questions were then read by Graduate Student Government members.

Members and administrators discussed situations that international graduate students face, including paying out-of-state tuition and international student fees, as well as concerns about the overall campus environment and finding community.

“You enhance the university’s mission, support our economy,” he said. “You enrich our culture.”

Dan Laffin, GSG president, said that this university has denied graduate assistantship opportunities to some international students who couldn’t come to the U.S. because of the pandemic. He noted that other private and public universities across the nation have supported international students more during the pandemic and asked the panelists to clarify the reasons behind the decision to deny graduate assistantships.

The lack of assistantships also leaves these students with limited employment and research opportunities, Laffin said, both of which are integral to graduate programs. This can cause “unnecessary additional financial and mental burden,” he said.

Mike Poterala, university general counsel, said the decision was in part because of complications caused by international laws. He also added that the Office of General Counsel recommended that any university units trying to support graduate students internationally should obtain counsel from those countries to ensure compliance with local regulations.

Steve Fetter, the graduate school dean, said the options they researched to adhere to foreign employment and tax laws were not financially feasible. As an alternative, all students offered a graduate assistantship were provided with a tuition fellowship that, in total, amounted to $3.5 million.

Fetter also said he has worked with the university’s vice president of research to share the cost of a proposal manager, a new position that would focus on graduate student funding as well as work with students on fellowship proposals and with faculty on training grants.

“Providing more funding for graduate students in general has been my highest priority,” he said.  “In just the last two and a half years the minimum stipend has increased by 20 percent.”

Simon Sheaff, GSG vice president of legislative affairs, asked administrators why international students who move to and live in Maryland for years are still required to pay out-of-state tuition. International graduate students pay at least $13,000 more than in-state students, according to the Office of Student Financial Aid.

Fetter said those students are still required to pay out-of-state tuition due to a university system policy and said that petitions for change of status are not available to employment visa holders. These students, though, can petition for residency reclassification if they demonstrate that they intend to stay in Maryland.

In response, Fetter outlined how international student fees are used. He said that fees go toward services the university believes are critical for international students, such as assistance with visa and immigration issues and maintaining a relationship with the federal government.

These decisions were made after “extensive research into similar fees … and after broad consultation on campus,” Fetter said.

Laffin also brought up concerns about the lack of child care and family services for international students.

“There are very few instances in which families and international students can participate in campus life and get to know each other … increasing that feeling of isolation and preventing students from thriving in their studies,” he said.

Fetter said Graduate Student Life has “considerable programming” and that family members must purchase memberships for other services.

Students also asked for clarity on the operations of the International Students and Scholar Services office. Laffin explained that students are often redirected to the graduate school instead of receiving direct assistance from ISSS, which aims to help international students transition into life in the U.S. and navigate immigration requirements, according to its website.

Sue Dougherty, director of ISSS, said the program works with many overlapping fields and often cannot entirely cover a student’s concerns. She also announced the development of an international student advisory board to better receive feedback on issues these students are facing.

“[We] are coming to our office every day with the goal of making international students and scholars feel welcome and supported at the University of Maryland,” Dougherty said. “All of the staff are supporting international education and have a direct personal connection to international communities.”