For the first time in UMD SGA history, its legislature will be led by all students of color 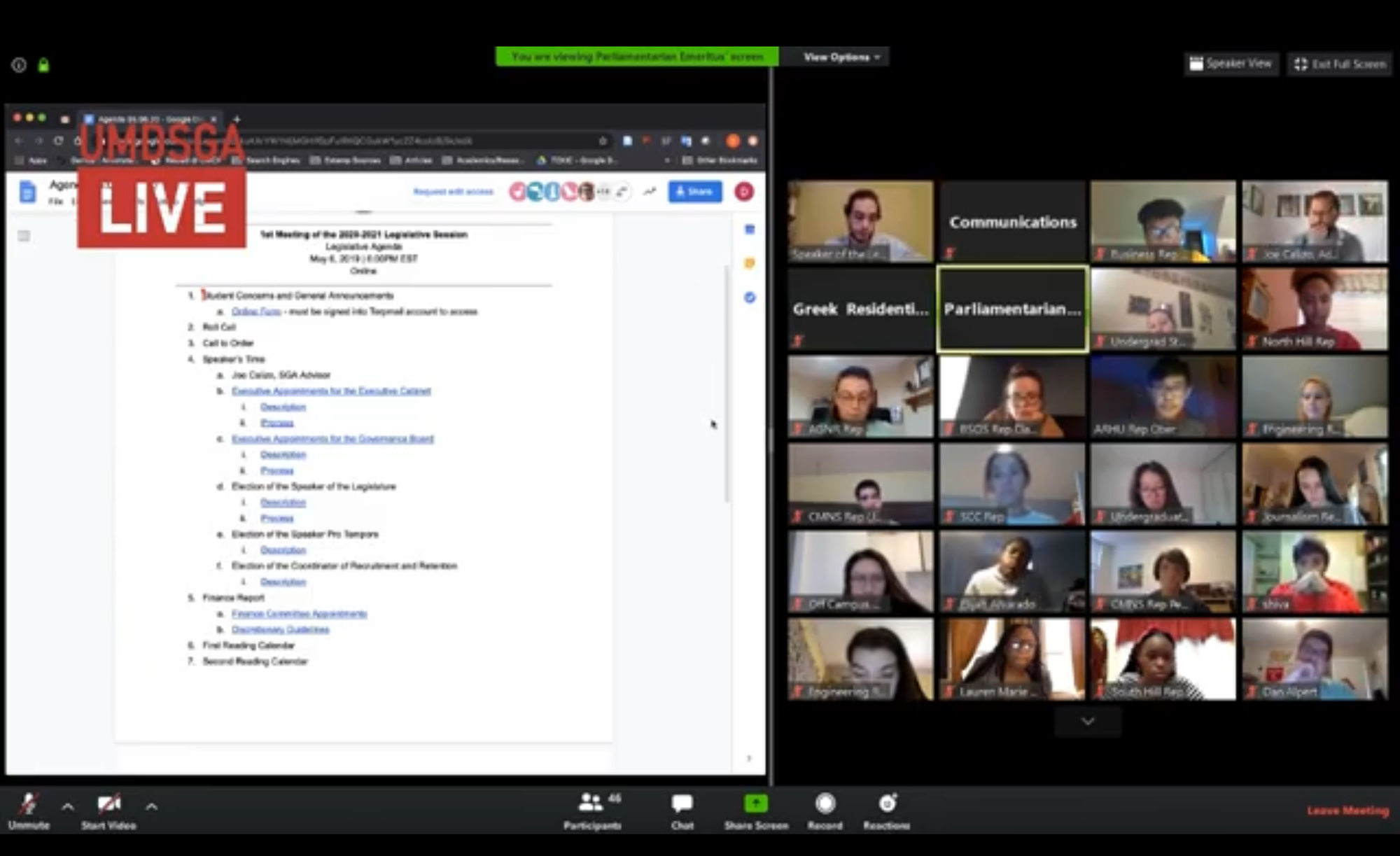 The first meeting of the University of Maryland's Student Government Association's 2020-2021 legislative session took place on May 6, 2020. (Amanda Hernandez/For The Diamondback)

The University of Maryland’s SGA will have a legislative leadership composed entirely of students of color for the first time in the 101 years it has been active on campus after a series of elections Wednesday night.

The historic elections come at a time when the body’s new legislature is also one of the most diverse in recent years — what some say is a welcome change for an organization that has previously been called out for being out of touch with marginalized student groups.

“The fact that we have an all person of color legislative leadership … It’s amazing,” said Petit, a business representative. “It’s an accomplishment that’s long overdue.”

However, some members have raised questions about the constitutionality of Parashar’s appointment and confirmation. Several are currently drafting an appeal to the body’s governance board, though they have not yet submitted it.

While Parashar initially lost in April’s elections, some SGA members pushed to confirm him Wednesday night as a legislator due to technical difficulties that arose during the election. Others, though, raised concern there shouldn’t be two South Hill representatives, citing the body’s election rules.

Still, Parashar said he looks forward to working with the rest of the legislative leadership. He believes that SGA is finally moving forward.

“I’m really excited that this is happening. There has been traditionally an issue within SGA — people of color not being represented enough,” he said. “This next leadership being elected by the legislature shows that we have made a very huge step towards actual representation of all people.”

[Read more: The SGA’s governance board will not hear appeal of former president’s veto]

On Monday, Patty Perillo, vice president for student affairs, swore in the SGA’s new president, Dan Alpert. While his cabinet is composed of six female student leaders, four of whom are women of color, Alpert himself is a white male. The last time the body had a person of color as its president was 2011.

In 2018, the SGA’s then-director of communications published a column in The Diamondback, branding the body as a “boy’s club” and urging it to make more of an effort to elevate the voices of women and people of color in the organization and usher them into leadership positions.

Now, Alpert said he’s dedicated to expanding diversity and inclusion efforts in the organization and making it the new norm to reach out to all communities on campus.

“SGA needed to be a more inclusive place — not just in terms of ensuring that when students come, they feel welcomed, but also in the aspect of us going to students,” he said.

In the fall, Alpert plans to add an undocumented student liaison to the body to ensure the SGA can spark dialogue with harder-to-reach communities.

The SGA originally organized the rally to call for the firing of football coach DJ Durkin, after an independent investigation into McNair’s death revealed a culture of abuse that existed in the football program. But when Durkin was fired the day before the rally was set to take place, it devolved into chaos, with SGA members urging students to attend football games and some responding with chants of “Boycott!” and questioning the body’s motives.

A week later, a coalition of 24 student groups came together to hold a counterprotest, calling for the university to “Fire the Liars” and usher in new leadership to the administration.

Later on that semester, the SGA unanimously voted to establish cultural liaisons for religious, racial minority and other protected groups of students — an initiative partly inspired by the “Fire the Liars” protest. However, these roles continue to go unfilled.

During last year’s SGA election, then-presidential candidate Taylor Green also accused the SGA of exhibiting a pattern of racist and classist behaviors that had led to her decision to resign from her position in the body months prior.

Green specifically noted that she frequently felt undermined by former SGA President Jonathan Allen and his executive board. She also asserted that the body ignored the input of marginalized students when planning events and did not take direct action to support these students following a series of hate bias incidents on campus.

Now, the SGA’s new leadership team hopes to bridge the historic gaps between the organization and minority students on campus.

Parashar, an international student from India and the South Hill representative, joined the SGA two weeks after his arrival in the United States. Since then, he says he has found community with other students of color within the organization.

He recognizes division remains between some members of the body, though. He says it’s one of his goals to expand the role of minority student voices in the legislature and work more with the various SGA caucuses.

And Stewart, the Ellicott representative, described the non-white legislative leadership as a starting point to expand diversity in the body. She hopes the emergence of minorities in leadership positions will inspire more students from underrepresented communities to join the organization.

“It’s really, really monumental … it’s what SGA needs,” she explained. “[It] just shows that the culture of SGA is changing, and that we are really trying to move to a place where we are working together with marginalized communities, and again, being truly representative.”