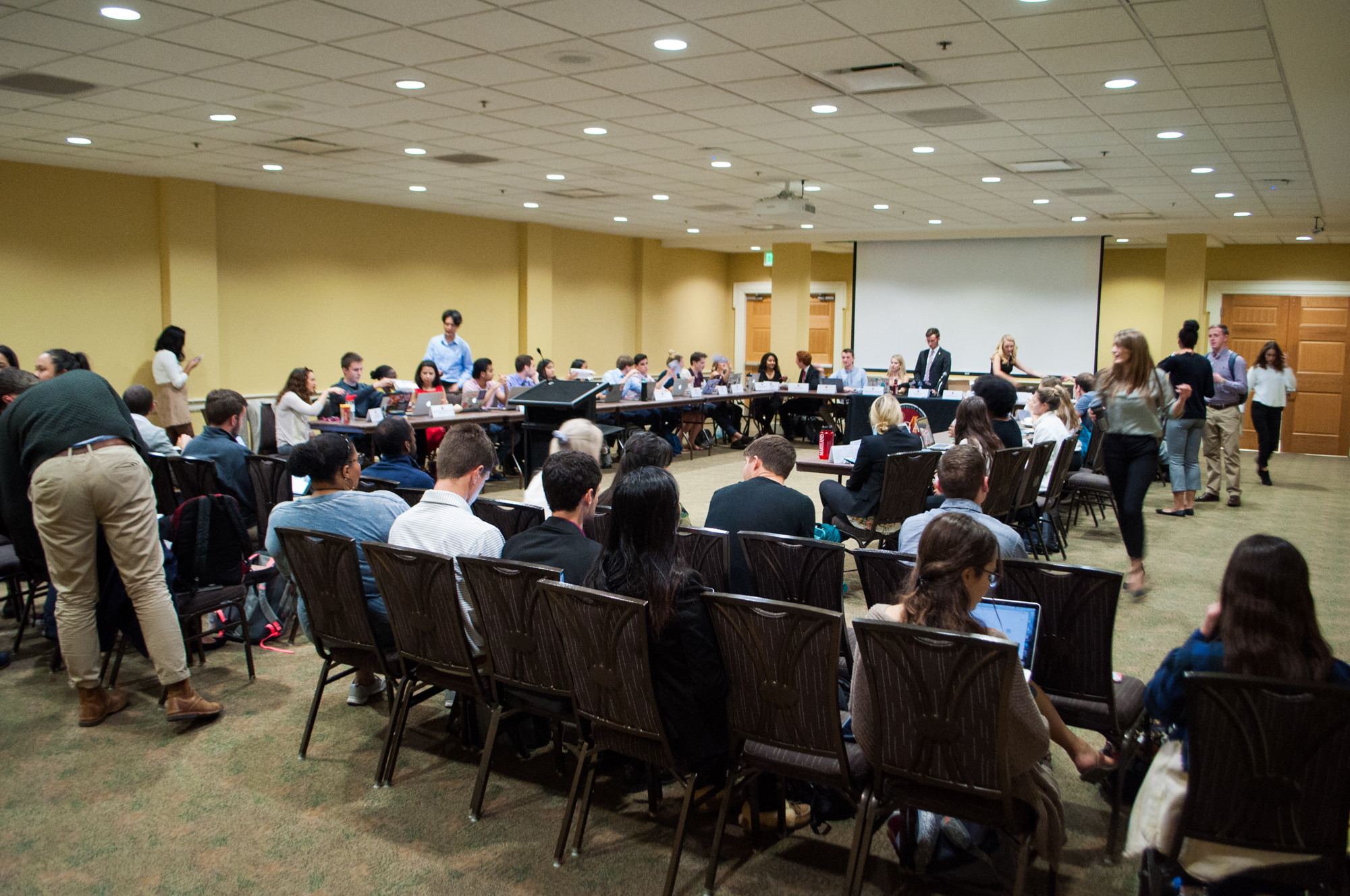 Students and representitives gather for the SGA meeting on October 18th, 2017. (Elliot Scarangello/For The Diamondback)

When I took on my position as communications director for the SGA at the start of my junior year, I wrote a column in this same newspaper calling for diversity in student groups, including the SGA. I still believe it’s important for students who identify as minorities to insert themselves into spaces that have not traditionally been for them. That’s how we change the culture. For all of my complaints, I hope others have benefited from my perspective as a woman of color being shared in these rooms. When I debated continuing my role in the organization this past year, the thought of not having a voice in conversations is what stopped me from leaving.

Our SGA president next year will be a white man. Our RHA leadership next year will be two white men. The editor-in-chief of this very paper will be a white man. This isn’t to say these men aren’t qualified for their jobs — I can’t think of a more qualified SGA president or someone with more experience than Jonathan Allen. But all of these men were supported in their leadership journeys and were given a leg up by someone else.

[Read more: With SGA elections nearing, the group’s election board is understaffed]

In organizing the One Party ticket, only two women played any significant role: me and our former chief of staff, who has since left her position. It isn’t that there is a lack of talent in the SGA — it’s that people are habitually discouraged from creating competition to make room for the status quo.

In the case of the SGA, the last time we had a person of color in the presidency was 2011. Why is it that women and people of color on our campus are not ascending to leadership roles? I work with talented, smart, brilliant women all the time on this campus and within the SGA. I would be remiss to not mention that the bulk of the organizers on our campus are women of color.

I understand the argument against diversity for diversity’s sake, but tokenism is not a solution to that problem. Our SGA has been guilty of selecting members of the executive or legislature to create a sense of diversity without actually making a culture change.

Is this something that we should be satisfied with? Should we breathe a sigh of relief when we’re planning our campaign and we finally find someone Black or Latinx or Asian to round out the ticket? Should we feel good about ourselves because on paper, our gender ratio is just about equal?

As a senior, I’ve tried to be an open ear for anybody who needs to feel listened to. The most common complaint women have come to me with is feeling they’ve been mansplained to. More than one woman has come to me considering leaving because she felt undervalued. Some less common complaints, but ones that upset me: women in leadership roles who felt like mere secretaries; women who felt invisible or spoken over in meetings with male members; and the one that upsets me the most, women feeling there’s no future for them in the SGA.

[Read more: The future of an SGA program to promote identity, discrimination discussions is uncertain]

As I gear up to graduate, I regret not fighting more. I regret allowing myself to be the supporting character in someone else’s leadership, when I now realize I’m just as capable as — if not more than — the boy’s club that women in SGA talk about in private but never confront in public. There is this persistent sense that despite everything, there’s nothing I can do to make my male peers truly believe I am their intellectual equal.

While there are plenty of SGA members who have absorbed the hierarchical boys’ club culture into their attitudes about leadership, I also believe many younger members of my organization are moving toward this change. I encourage them to keep on going, no matter how insurmountable it feels sometimes.

I have no doubt about it — the SGA can make real, tangible change on this campus. But we have to start with ourselves.

Nisha Desai is a senior English major. She can be reached at nishadesai96@gmail.com.