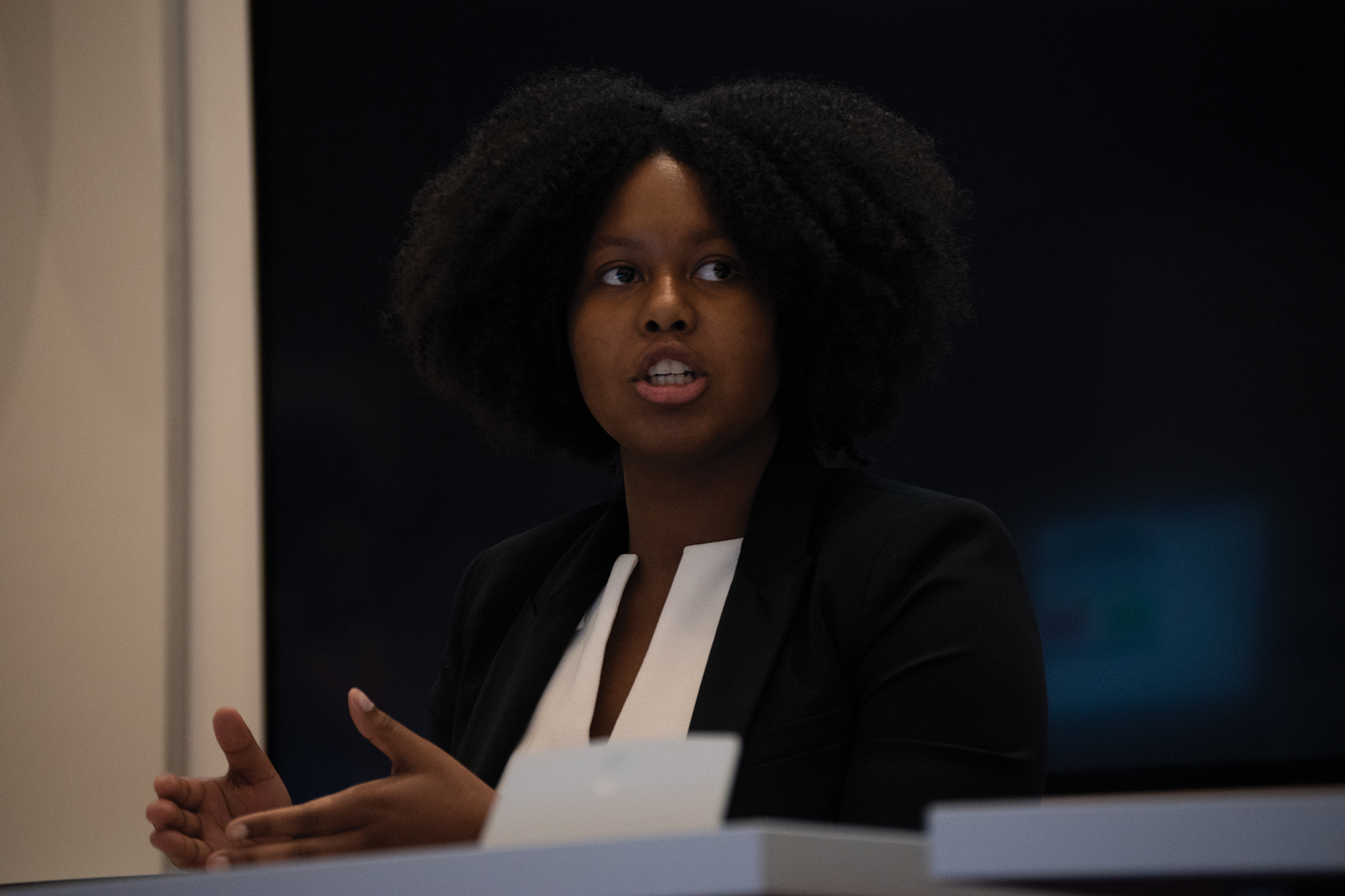 University of Maryland SGA presidential candidate Taylor Green alleged Thursday night that a pattern of racist and classist behavior prompted her February resignation from the body, just days before voting is scheduled to open.

“Every step I took within this organization was an attempt to begin dialogue around diversity issues as it related not only to SGA itself, but to the campus as a whole,” wrote Green, who is running on the Unite UMD ticket and the Student Government Association’s former Diversity and Inclusion Committee director. “Every step I made was undermined by [SGA president] Jonathan Allen and his executive board’s lack of understanding, empathy, and care for this work and for these students.”

In the letter, tweeted from the Unite UMD account and posted on the party’s Instagram page on Thursday, Green said the SGA had ignored the input of students from marginalized groups when planning events and had not taken direct action to assist these students in the wake of a series of hate bias incidents on the university’s campus.

“I continually felt the chill of an exclusive climate [in the SGA],” Green wrote. “I have witnessed patterns of racist, sexist, ableist, and transphobic behaviors, mirroring institutional discrimination experienced by so many of those marginalized and silenced within our campus community.”

Allen called these allegations “concerning,” but disputed many of Green’s claims. He told The Diamondback that the letter came as a surprise, as the SGA hadn’t seen it before Thursday.

Allen said he was disappointed at the nature and timing of Green’s comments. He said she never came to him with her concerns during her time with the SGA and did not go through the SGA’s formal complaint process.

“I didn’t see any progress on any of her initiatives, so I’m not sure what work she said I undermined,” said Allen, a senior government and politics major. “She’s expressing all these grievances two months after, but I find the best way to change is through her direct impact in leadership. She was in a perfect spot to do it.”

Green told The Diamondback she didn’t immediately publish her resignation letter because she wanted to see how the SGA would respond to her absence. She said rumors were spreading that she wasn’t handling her responsibilities as diversity and inclusion director, and that she was to blame for the legislature’s inaction on diversity issues.

“I wanted to wait and see. Everyone was saying it was my fault,” Green said. “Now that I’m running, the question I keep getting is ‘Why did you resign?’ I felt that I should explain it fully — this is why I left.”

Green’s letter echoed many minority students’ concerns following a spike in hate bias incidents on this campus and the deaths of two black students.

In May 2017, 2nd. Lt. Richard Collins, a black Bowie State University student, was stabbed to death on this university’s campus. Sean Urbanski, a white former student at this university, was charged with murder and a hate crime in the killing.

In June 2018, Jordan McNair — a black offensive lineman on the Maryland football team — died from heatstroke he’d suffered at a team practice. After McNair’s death, the university launched two investigations, one concluding that the team’s medical staff didn’t treat McNair’s symptoms on time and the other finding a culture of abuse that existed within the program.

In response to the publication of the second report, the SGA — along with this university’s NAACP chapter and College Democrats and Republicans — organized a rally, called “Justice for Jordan,” to call for football coach DJ Durkin’s firing.

But Durkin was fired the day before, and the rally devolved into chaos as student groups — many of them activist groups such as Political Latinxs United for Movement and Action in Society and Students for Justice in Palestine — disputed the SGA’s call to support the football team.

Green wrote in the letter that the SGA’s actions following McNair’s death were “disingenuous” and “a disaster.” She named seven of the rally’s organizers — Allen, speaker Noah Eckman, policy advisor Ireland Lesley, academic affairs vice president Rahila Olanrewaju, financial affairs vice president Andrew Stover, student affairs vice president Ro Nambiar and chief of staff Doron Tadmor  — who she said did not consult her or the rest of the cabinet and legislature before going forward with their plans.

Maleeha Coleburn, a member of the Diversity and Inclusion Committee, also said the SGA’s executive board didn’t reach out to Green or her committee following the rally.

“We talked about the rally at a later [committee meeting], and Allen listened and acknowledged he had never reached out her. It’s interesting to see what they say, because it’s two very different stories,” Coleburn, a junior government and politics and public policy major, told The Diamondback.

Ajay Mahesh, public health representative for the SGA, disputed Green’s claims that she wasn’t consulted, saying she could have been more involved in the process leading up to the rally. While he acknowledges that the SGA had many missteps, he said the details are not only what Taylor accounted. Mahesh said Allen and the executive board contacted her twice about planning meetings for the rally, but she said she was too busy to attend.

“As the Diversity and Inclusion Director at the time, she has the responsibility and self-interest to be in those discussions in order to prevent the resulting rushed decisions/tone-deaf decisions,” Mahesh, a senior community health major, wrote in a message to The Diamondback.

“No one on exec reached out at all,” she wrote in a message to The Diamondback. “They decided to talk to other student leaders, but not me.”

Lesley, who’s now the presidential candidate for Empower Maryland, also denied Green’s claims against the SGA’s lack of communication. She said there was at least some dialogue between Green and the executive board before the rally.

Eckman declined to comment. Olanrewaju said she was unable to comment before the time of publication. Stover, Nambiar and Tadmor did not respond to requests for comment.

Green also attached a series of Slack screenshots to the tweet, showing fellow SGA members — with names blurred out — disagreeing with her decision to share tweets criticizing the SGA and the Justice for Jordan rally within the messaging system.

Green told The Diamondback in February that she took issue with the SGA’s “culture” surrounding race, which was one of the factors behind her resignation.

“I honestly cannot tell a black student to join this organization because it would be good for you,” she said. “So if I can’t tell people to join, why am I here?”

After the Justice for Jordan rally, the SGA voted unanimously to establish cultural liaisons to marginalized communities, which Allen said he would attempt regardless of the bill’s passage. Green wrote that Allen said “it was not important because he was just going to do it anyways.”

Allen said at the time that he thought it was “a bit extra,” because it was “essentially a resolution urging me to do something that I’ve agreed to do.”

“I don’t think we need to pass bills for PR purposes,” he said. “You may do as you please, I will appoint them regardless of if this bill passes or not.”

Allen apologized for the comments, and later attempted to appoint Senam Okpattah — who co-sponsored the original bill — as the SGA’s liaison to the black community, bypassing the procedure outlined in the bill. The body voted down her nomination, 10-15-4.

Allen said the legislature never provided him a list of candidates for the liaison position — as the bill stipulated — and said the failure of Okpattah’s nomination indicated to him that the legislature had “made it clear” he would not be able to pass further nominees.

But Coleburn said that a lack of communication from the executive board prevented the committee from pursuing the project.

“If [Allen] wanted a list of nominees, he could’ve reached out. For people to criticize us and not reach out, that’s not right,” Coleburn said.

Green also accused Allen of not standing with fellow Latinx students. She highlighted his Colombian heritage — comparing him to university President Wallace Loh, who grew up in Peru — and wrote that he’s “shown a lack of regard and concern” for establishing a Latinx Cultural Center and convincing the university to divest from Immigrations and Customs Enforcement.

These comments drew the ire of Allen, who highlighted his work on these initiatives.

“I think it’s ironic that someone who claims to be a champion of diversity and inclusion efforts tries to discredit someone else’s identity like that,” Allen said.

Green closed her letter by calling for “sweeping changes” to the government, writing that the letter outlined her reasons for running.

This year’s SGA elections have already been marked by controversy. On Tuesday, the SGA’s election board announced the elections would be delayed several days to “allow for current standing appeals and complaints to be thoroughly and fairly processed.”

CORRECTION: Due to a reporting error, a previous version of this story incorrectly referred to Students for Justice in Palestine as the Palestinian Student Union. This story has been updated.