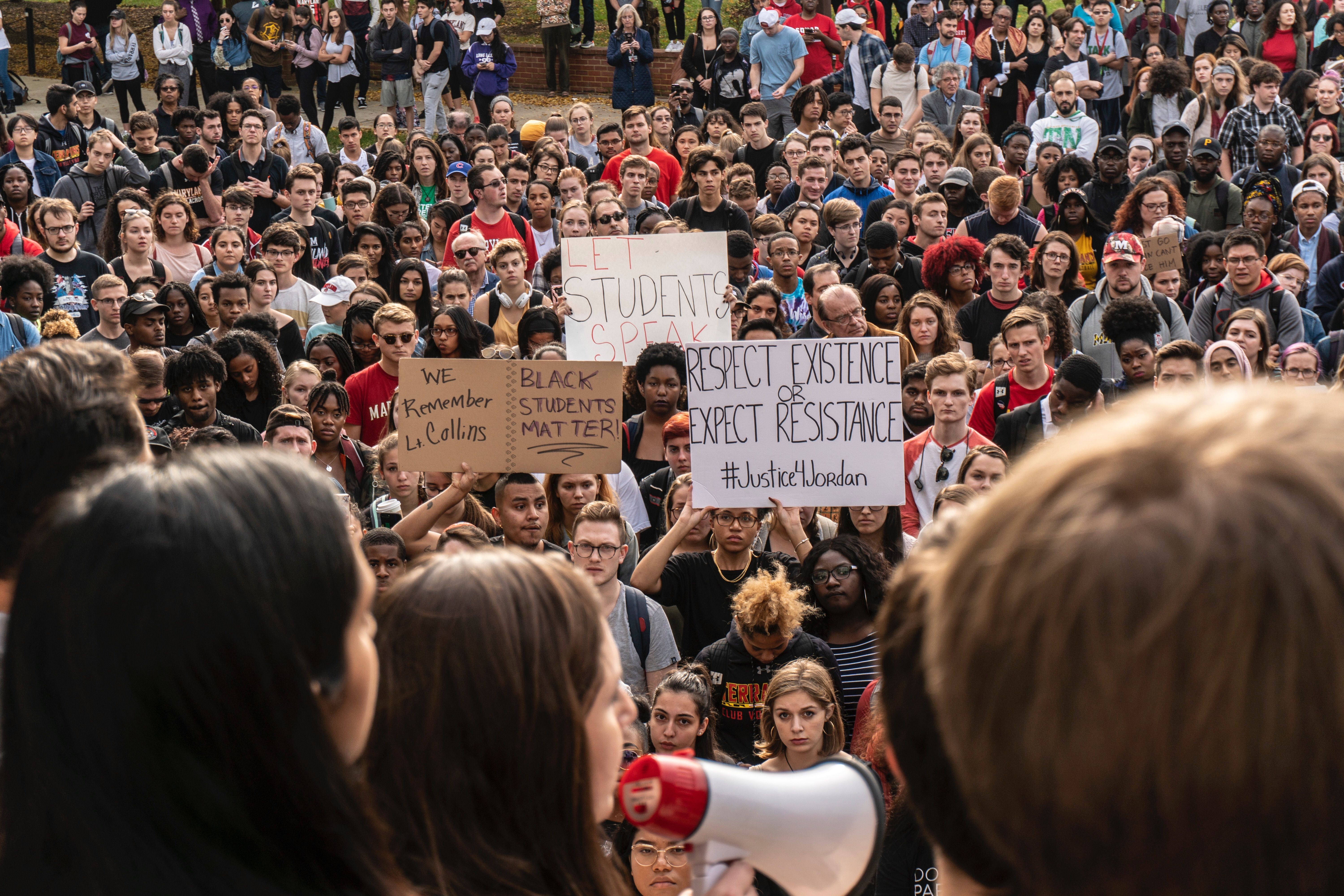 Organizers address the crowd of hundreds of protestors in front of the Main Administration Building during the “Justice for Jordan” protest on Nov. 1, 2018. (Jon Orbach/For The Diamondback)

It began as a protest against football coach DJ Durkin. After he was fired, it became a rally in support of student-athletes.

But within 10 minutes of the “Justice for Jordan” rally’s hectic start on Thursday afternoon, it became clear that no one could agree on just what to say about the University of Maryland.

Repeated chants of “Boycott!” drowned out the voices of student leaders who, while brandishing posters and megaphones on the Main Administration Building steps, were encouraging attendance at football games after a tumultuous few months for the team.

“We have to come together and support the friends and family of Jordan McNair, the football players and the athletics department as a whole,” College Republicans President Ben Colebrook said through a megaphone to the hundreds in attendance. “This is not us versus them — this is us, together.”

The fallout from the death of McNair, who didn’t receive proper treatment after suffering heatstroke at a team workout in May, weighed heavily on the crowd.

A tense and often chaotic atmosphere permeated the rally, which was led by the SGA, the College Democrats and Republicans and the NAACP.

Starting at about 3:30, protesters who had gathered in front of McKeldin Library marched down the mall toward the administration building. There, a rift seemed to open between activist groups that once worked hand-in-hand.

Signs with messages like “Terps for Terps” and “Students Supporting Students” were met with chants of “where is the justice?”

Students gathered outside McKeldin Library and marched to the Main Administration Building during the “Justice for Jordan” protest on Nov. 1, 2018. (Evan Kramer/The Diamondback)

Megan Lim was one of those shouting over the planned speakers.

“It’s ridiculous that this rally is trying to convince us to request student tickets and support an administration that … continuously exploits student-athletes for their own profit,” the senior English major said. “It’s disrespectful to the [McNair] family.”

College Democrats President Sydney Poretsky told the crowd that they should attend Saturday’s football game against Michigan State as a show of solidarity with the players.

“For months, these players have had to report to practice, play in games, all without the presence of their brother,” Poretsky said. “And yet, we have not showed up to demonstrate our support.”

An average of 32,913 fans have attended the four games at Maryland Stadium this season. That’s down more than 3,000 from last year’s four-game average.

As Poretsky urged the attendees to go to Saturday’s game, many students began to chant “boycott.” The interruptions drew the ire of SGA leaders.

“I asked for one thing,” shouted Ro Nambiar, the SGA’s student affairs vice president, after taking the bullhorn back from Poretsky, “and that was respect.”

“You co-opted this entire event,” one student yelled in response.

A group of 24 student organizations were so concerned with the messaging from the rally that they opted to plan a protest of their own for Monday afternoon.

In a statement released Thursday night, the groups called for President Wallace Loh to remain committed to his retirement, for the inclusion of students in the selection of future presidents, and for the University System of Maryland Board of Regents to become “a democratically elected body.”

“The Board of Regents acts as an authoritative ruler over this campus,” senior government and politics major Michael Brennan said. “Their interests are fundamentally not aligned with the interests of students.”

In the wake of McNair’s death, this university launched two investigations — one focusing on the May 29 workout where he suffered heatstroke, and the other on allegations of abuse from multiple players. The Board of Regents, which sets policy for the 12 institutions in the system, subsequently took control of both investigations, drawing criticism that it had overstepped its bounds.

After the board’s recommendation on Tuesday that the university retain Durkin — as well as athletic director Damon Evans and the two trainers who botched McNair’s treatment — calls for chairman James Brady to leave his post were growing louder.

At about 5 p.m, shortly after the rally’s conclusion, Brady announced his resignation.

A crowd of students gathers in front of the Main Administration Building during the “Justice for Jordan” protest on Nov. 1, 2018. (Jon Orbach/For The Diamondback)

Loh said he told the commission he wanted Durkin gone, but the regents vowed to fire Loh if he fired Durkin, The Washington Post reported. The Board has power over the hiring and firing of university presidents, but not other school personnel.

These reports fed a rift between the board and state politicians. Gov. Larry Hogan, who appoints members of the board, criticized its decision, while Democratic gubernatorial nominee Ben Jealous directly called for Durkin and Evans’ firing.

Durkin had been on leave since August following McNair’s death and media reports that he oversaw a “toxic culture” within the football program.

In a 369-page report released earlier this week, the eight-person commission charged with investigating the claim detailed widespread abuse and dysfunction within athletics, but declined to deem the program’s culture “toxic.”

That didn’t stop chants of “Hey hey, ho ho, this toxic culture’s got to go” from echoing down the mall as the rally-goers descended on the administration building.

The line of of students nearly stretched the length of the mall. As the first of them were reaching their destination, the last were just leaving the library steps.

Akil Patterson, a former Maryland offensive lineman, urged groups of frustrated students in the crowd to interrupt the speakers.

“Disrupt the process,” he yelled. “Go up there and take it over.”

Midway through SGA President Jonathan Allen’s speech, they did just that. Students swarmed the steps, drowning out Allen’s calls to support the football team — he had brought hundreds of tickets for Saturday’s game to the rally — with cries of “Let us speak!”

Rod Martinez, a sociology doctoral student, was one of them. He stood looking out over the campus, holding a handmade cardboard sign that said “We Remember Lt. Collins” one one side, and “Black Students Matter” on the other.

2nd Lt. Richard Collins, a black Bowie State University student, was fatally stabbed in May 2017 while waiting for an Uber on the campus. Sean Urbanski, a white former student at this university, is scheduled to stand trial in January for hate crime and murder charges.

“This is the second black student to die on the University of Maryland’s watch,” Martinez said. “As a student of color, we’re angry.”

Allen said he didn’t have any resentment toward the counter-protestors.

“They’re students that are rightfully expressing their opinions and their outrage and their emotions,” the senior government and politics major said. “All students on this campus should be doing so.”

Students chant while organizers speak in front of the Main Administration Building during the “Justice for Jordan” protest on Nov. 1, 2018. (Evan Kramer/The Diamondback)

Sophomore English major Mary Murdock said she felt students were “misled” about the purpose of the rally.

Yanet Amanuel, a 2017 graduate of this university, was in attendance Thursday. As one of the driving forces behind ProtectUMD — a coalition of 25 student groups advocating for the rights of marginalized groups on the campus — she said she was disappointed by what she saw.

“It’s just on kind of a surface level — it’s not going anything deeper,” said Amanuel, who currently works with the Prince George’s County NAACP branch. “When we were organizing ProtectUMD, we worked closely with [the] SGA, so our messaging was all the same.”

Sophomore English major Halle Parigian said she thought the group of protestors “needed someone to rally against.” Once Durkin was fired, “they struggled to sort of place themselves in what argument they were even trying to make.

“Was this a memoriam for Jordan’s life, or was this a rallying cry against the Board of Regents?” Parigian asked. “I think the distinction had to have been made.”