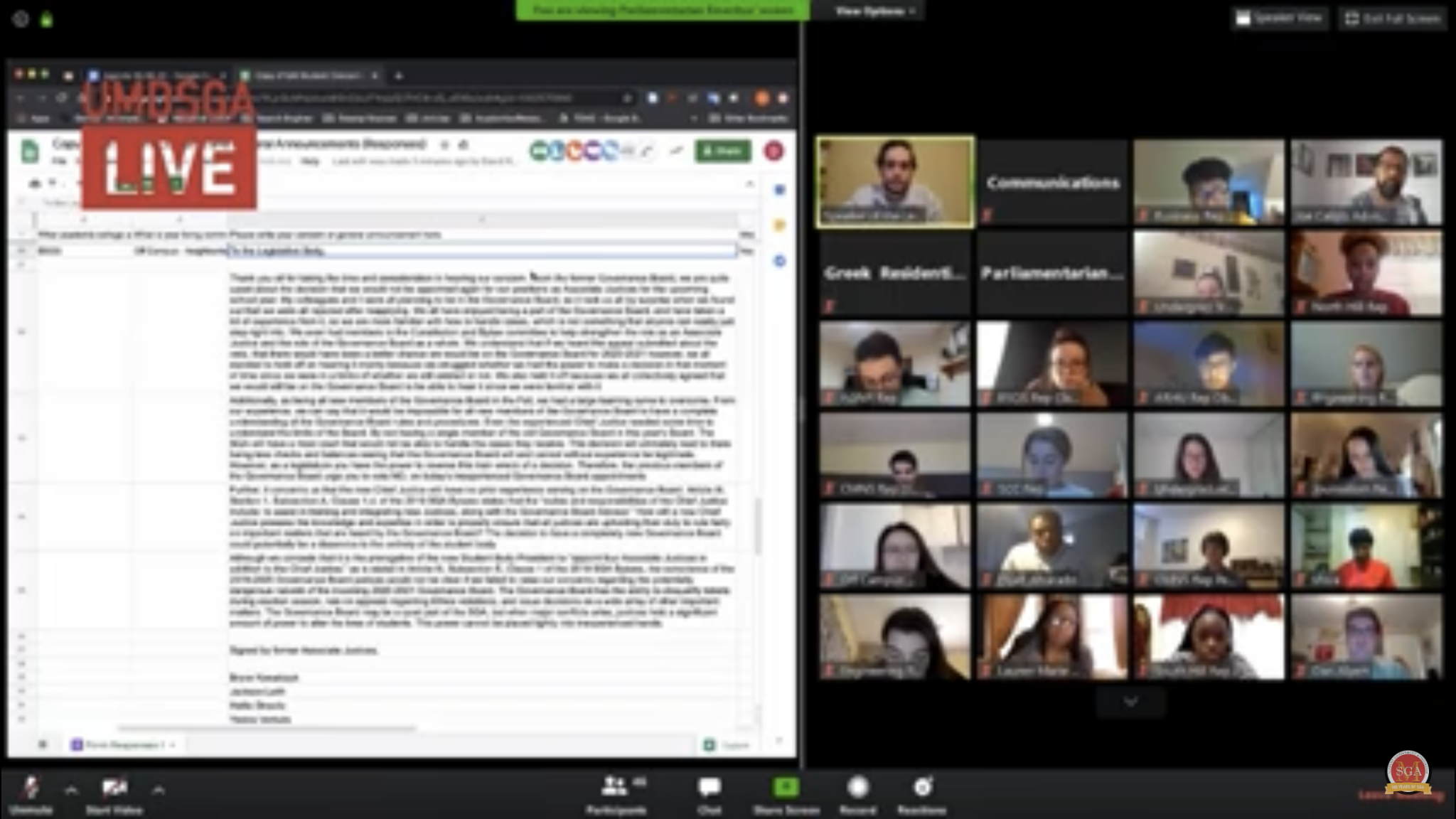 The first meeting of the University of Maryland's Student Government Association's 2020-2021 legislative session took place on May 6, 2020. (Amanda Hernandez/For The Diamondback)

In a unanimous decision Tuesday, the SGA’s governance board ruled it will not hear an appeal submitted Monday evening that challenged the constitutionality of former President Ireland Lesley’s veto of revisions to the body’s bylaws and Standing Rules of Order.

While the governance board decided the appeal had grounds to be heard, the justices ruled they no longer had judicial authority to hear the case, citing the Student Government Association’s constitution.

“Appointment to the governance board shall be the same duration as the legislative year in which they were appointed,” the document read.

The governance board felt it no longer had jurisdiction over the appeal that was sent Monday, after the inauguration of newly elected members and the start of the 2020-2021 legislative session, outgoing SGA Chief Justice Jonathan Frank said.

The petitioners resubmitted the appeal to the new justices Wednesday night.

The appeal, which 13 SGA members signed Monday evening, calls on the governance board to review the constitutionality of Lesley’s decision to veto the revisions to the body’s bylaws and rules of order. The appeal argues the veto violates a clause in last year’s Standing Rules of Order, which requires a veto to be submitted no later than 24 hours before a body’s meeting.

The signatories also explain that the Standing Rules of Order prohibit legislation from carrying between years, thus preventing the newly elected legislators from being able to overturn the veto.

“This decision is a dangerous precedent to set. One that will have drastic implications for the representation (or lack thereof) that students will have in the upcoming year, for the way the organization goes about reviewing their governing documents, and for the power of the Student Body President,” the appeal read.

Elena LeVan, the SGA’s outgoing director for sexual misconduct prevention and one of the petitioners, expressed her frustration with the board’s decision, arguing the decision to not hear the appeal now leaves the new SGA in a “constitutional crisis.”

“There was an opportunity here to minimize the damage that’s being done by the veto and clarify some issues, and it’s being completely ignored,” she said. “This veto could have immediately been dealt with by the governance board, but instead they’re taking it to a completely new governance board that has never run a hearing.”