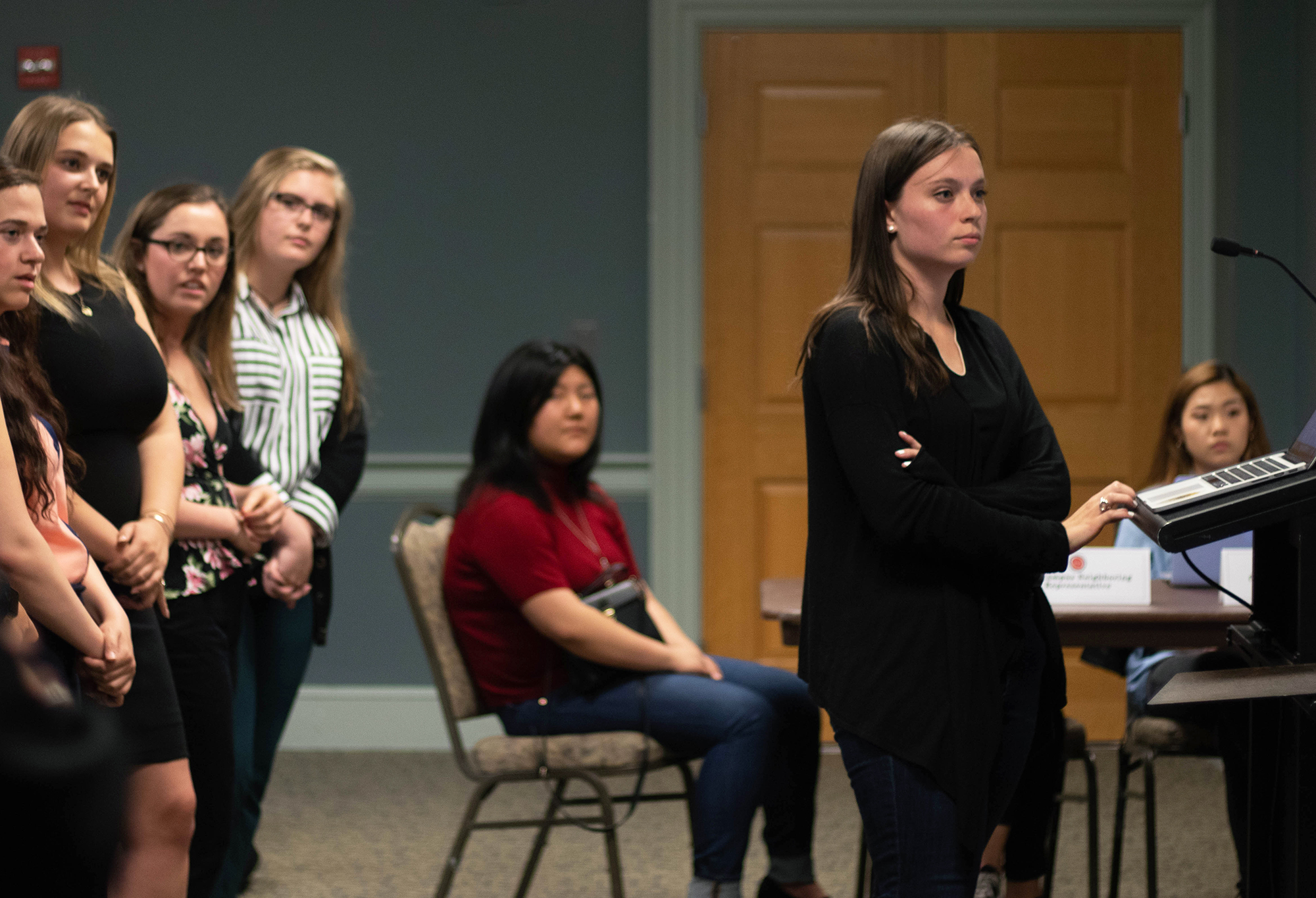 By Amanda Hernández and Angela Roberts

In a statement she released Monday evening, not long before the SGA’s newly elected legislators were sworn in, Lesley took issue with several changes made by the legislature. Along with the revision to the body’s funding policies, she criticized the expansion of the accountability and ethics committee.

Additionally, Lesley wrote that the body had failed to reach out to students who would be impacted by the changes proposed to the bylaws before voting to pass them. Although she wrote that she agrees with many of the amendments, she added that it would not be “right” to pass them with almost a third of the legislature missing.

“I cannot, in good faith, sign these documents,” she wrote. “I want to thank all of the members who worked on these changes and stayed up late debating these amendments. I do not take that for granted and will make sure your work is shared with the next Administration so that these conversations can continue.”

The move leaves some legislators scrambling to find a way to overturn Lesley’s decision. Had there been another meeting left in this year’s legislative session, representatives could have done so in a two-thirds majority vote. However, Wednesday’s meeting was the body’s last of the session.

Some legislators are now attempting to schedule an emergency meeting “as soon as possible,” in hopes of overriding Lesley’s veto. As of Monday night, 21 had signed a petition to hold such a meeting. A two-thirds majority vote — the backing of 24 legislators, per the petition — is required to do so.

Elena LeVan, the outgoing director of sexual misconduct prevention, also submitted an appeal to the governance board alongside other legislators.

She pointed to a change proposed to the bylaws that would allow legislators to vote privately, should a motion for them to do so pass. Students have the right to know their representatives’ stances on certain issues, she said.

On April 22, legislators voted to make an adjustment to the body’s Standing Rules of Order that would have required Lesley to voice her objection to a piece of legislation before the final meeting adjourned. However, since Lesley has not yet signed these changes into effect, SGA Chief Justice Jonathan Frank said, the body is still being governed by the same Standing Rules it has been all year.

David Pontious, the outgoing off-campus neighboring representative, said he felt Lesley’s decision to veto the bills was uncalled for.

“I’m very, very disappointed,” he said. “It just strikes me as really kind of shameful and very underhanded to veto a massive piece of legislation like this at the last second.”

“It just shows that she’s also not interested in getting involved in dialogue,” he said. “The fact that these changes that were supposed to bring transparency was quoted as a problem, seems to tell me that she doesn’t have much of a respect for transparency — which she ran on when she got elected.”

In a close vote late Wednesday night, legislators moved to expand the membership of the accountability and ethics committee from six individuals to 10 and require that their appointment be confirmed by the legislature. This change drew concern from Lesley and other SGA members, who worried that it would leave committee members — who are currently supposed to be anonymous — susceptible to harassment and outside influence.

“It’s just kind of appalling that all of that collaboration and work is just completely overridden by one single person, who I guess feels that their opinion matters more than others,” she said.

Nefflen also questioned Lesley’s assertion that the SGA would be further divided if legislators knew the identity of those serving on the ethics and accountability committee.

“Having this legislature confirmation process allows us to make sure that they are picking ethical people,” she said. “It’s worth noting that almost everybody in SGA knows the members of ethics currently, so it’s not like the secret is being kept that well in the process we currently have.”

As Wednesday’s meeting stretched into the early hours of Thursday, legislators also discussed a change to the SGA’s funding rules for student groups. Currently, student organizations are not allowed to use SGA funding to pay wages or salaries unless they receive approval from the student body to do so through a referendum.

In 2018, MaryPIRG, a nonprofit student lobbying group on campus, put forward a successful referendum to dedicate SGA funding to two non-student salaries — the only time such a referendum has taken place in the three years SGA financial affairs vice president Ben Cohen has served on the body, he said.

At the meeting, Cohen pushed to remove this exemption from the bylaws. Much of the money the body had allocated to MaryPIRG to fund these positions went unspent this year, Cohen said, since the campus organizer the group hired last semester left prematurely. This funding could not be reallocated to other student groups during the school year, Cohen said.

However, Lesley and SGA Parliamentarian David Polefrone expressed concern that MaryPIRG hadn’t been properly notified of the proposed change. Cohen said he raised the amendment “offhandedly” to the constitution and bylaws committee in the fall and formally proposed the revision in February. He added that he does not remember reaching out to MaryPIRG to discuss the potential adjustment.

“If I didn’t, it was because I was dealing with contacting 100 other student groups. It wasn’t because I was trying to be malicious,” he said. “I work, like, 20 hours a week or so just on this, not including my schoolwork. It was not meant to pull one over [on MaryPIRG].”

After Wednesday’s meeting, several campus leaders — including MaryPIRG’s treasurer, president and campus organizer — appealed the vote to the body’s governance board, calling it unconstitutional.

In a text message, MaryPIRG President Sonja Neve wrote that the student group was planning to run another referendum during the SGA’s 2021 election.

“We are supportive of the referendum process because it allows us to include more student voices and allows every student power to choose where their money goes and control their educational experience,” she wrote.

In a unanimous decision, four of the governance board’s justices ruled that the revision was constitutional, since legislators voted to approve the final reforms bill in a two-thirds majority. Additionally, they found that MaryPIRG had been given “adequate opportunities” to voice its concerns — at the beginning of Wednesday’s meeting, for instance, or by becoming voting members of the constitution and bylaws committee.

However, the justices also reprimanded Cohen in their decision, pointing out that he hadn’t brought up the amendment to MaryPIRG leaders, even though they routinely sent him reporting emails.

“While much of the onus is on the Petitioner to monitor proposed changes to clauses of the SGA Bylaws in which they so depend on, the Vice President of Financial Affairs should have welcomed the thoughts of the Petitioner into the discussion before the change was debated at approximately 2 a.m.,” they wrote.

Despite the strong opposition to her decision, Lesley stood behind her veto Monday evening.

“I don’t consider myself to be the only person to have a reasonable opinion, but I truly think that all of my decision-making really went into how this would negatively impact our organization and who we represent,” Lesley said. “I was elected and I swore to uphold those values and to respond to student concerns and to make this organization better.”