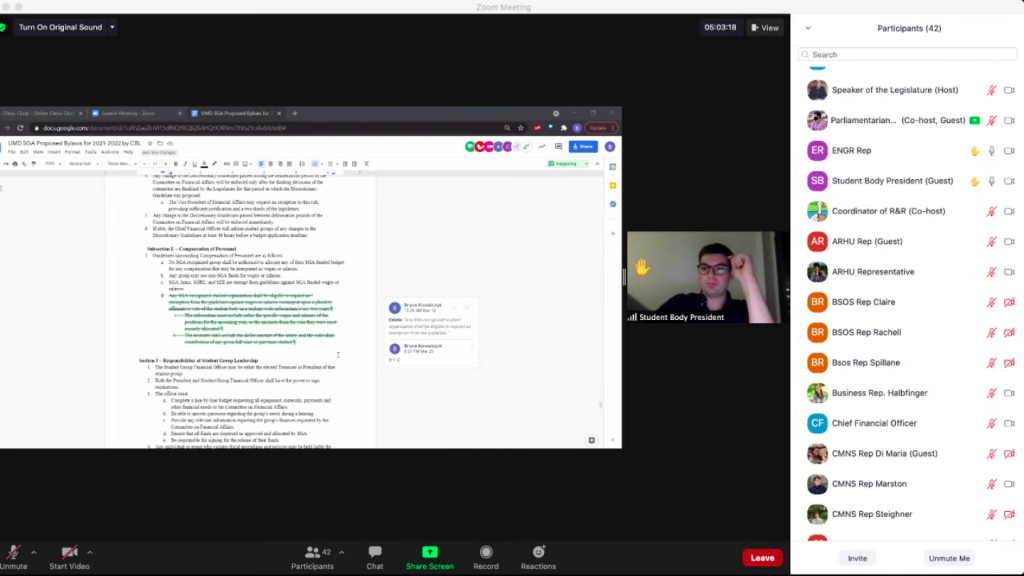 The SGA debated changes to the bylaws during its final meeting Wednesday. (Sofia Garay/For The Diamondback)

CLARIFICATION: This story has been updated to better reflect the amendment that the SGA passed about the finance committee. Legislators passed an amendment to pay 15 members of the committee, not to change the amount of payment.
In a nearly eight-hour meeting, the University of Maryland’s SGA debated rearranging roles and committees at their final legislative meeting Wednesday.

The annual omnibus meeting is the Student Government Association’s last legislative meeting in which members are given a final chance to pass legislation and review the organization’s constitution, rules of order and ethics, accountability handbook and governing bylaws to make changes.

Legislators made several changes to the governing bylaws, including eliminating the alumni relations and traditions committee due to lack of attendance at committee meetings. The position will stop existing as a director position and be moved to the office of the president, said speaker of the legislature and president-elect Kislay Parashar.

In addition, the SGA added a new position for an ombudsperson to serve as an outside representative to handle internal conflicts within the legislature.

“Having this, like, third party person who’s still in the organization to deal with it would be helpful to manage those smaller related issues,” Alpert said.

The ombudsperson will be combined with the student group’s public defender so the speaker and president will no longer have to handle internal conflicts.

Parliamentarian Bryce Kowalczyk said he believes the student group’s public defender can serve the role because they don’t handle the bulk of the SGA’s needs throughout the year and “it’s better to have somebody who’s a little bit more distant from the situation,” he said.

The SGA also added an amendment that would provide funding to pay the speaker of the legislature. The position used to be paid, Kowalczyk said, but this was changed by Parashar.

Kowalczyk said the speaker should be compensated for the amount of work they put into the SGA. He said Parashar doesn’t give himself enough credit for the work he does as the current speaker.

“This man does a metric … ton of work every single day,” he said.

For Parashar, advocating for the amendment is about preparing the speaker position for his successors.

“I’m not fighting for it to be paid to me, I’m fighting it for whoever the next speaker is,” he said.

SGA members also voted to add an amendment to the bylaws to provide $150 compensation for 15 finance committee members. The change defined a number of members to pay, so the SGA wouldn’t run out of funding if the committee grew. Legislators also debated changing the amount of compensation, but the body ultimately rejected any changes to the payment amount.

Kowalczyk explained that the money is for financial committee members to get food that they’re unable to get due to the amount of time they spend in the office, which is “huge if they’re foregoing meals,” he said.

“The goal should be increasing the number of committee members that the work is divided in the committee that there is no need to pay the members,” he said.

The meeting ended at about 1:45 a.m. after the legislature voted to pass the Omnibus Reform Act.

CORRECTION: Due to a reporting error, a previous version of this story misstated that the SGA passed a law to provide funding to the speaker. The SGA passed an amendment, not a law. This story has been updated.