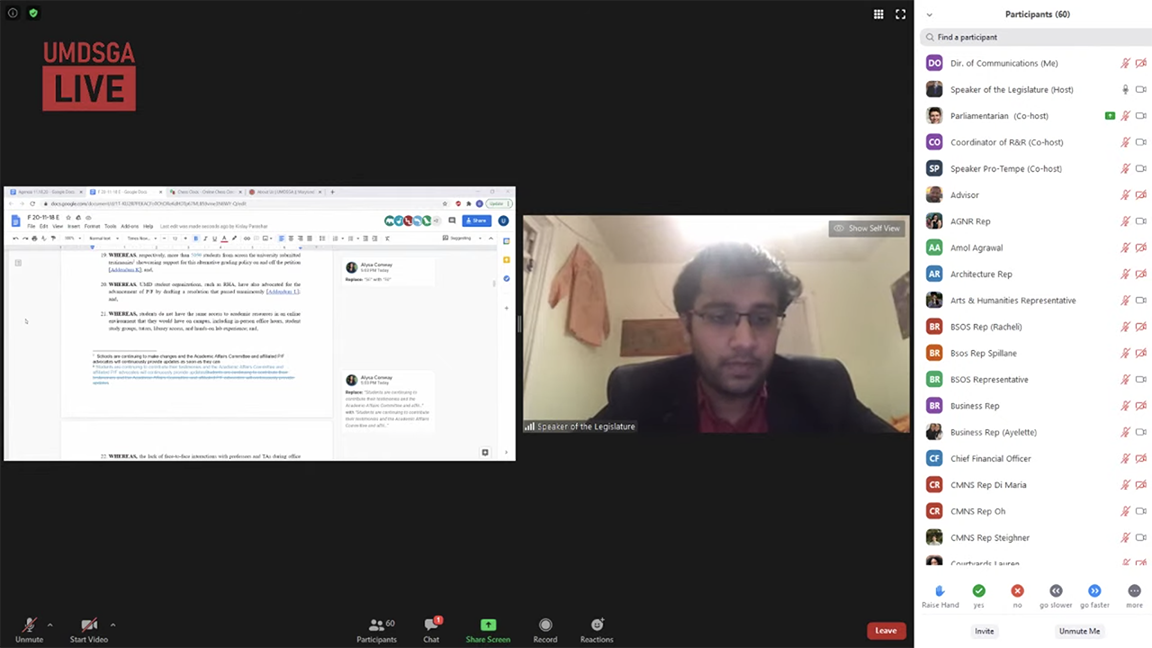 After the University of Maryland declined to reinstitute the pass/fail grading option that was implemented in the spring, the SGA voted unanimously Wednesday evening to approve a resolution urging the administration to reconsider its decision.

The resolution followed a petition that more than 7,000 students signed urging the university to grant the same pass/fail grading option it offered last semester at the beginning stages of the COVID-19 pandemic. Now, with the country experiencing a surge in coronavirus cases before the holidays, students are advocating for a reinstitution of that option.

“When there’s this many students who are saying that they need help, we need to do something,” said Dan Alpert, Student Government Association president. “I was happy to see the way that the bill ended up.”

The resolution showed staggering support among the body’s representatives, with 33 legislators sponsoring the bill. Winter Hawk, the SGA’s journalism representative and primary sponsor of the bill, said she and the SGA’s director of academic affairs, Alysa Conway, brought on as many co-sponsors as possible onto the bill as a show of overwhelming support.

On Monday, Provost Mary Ann Rankin wrote an email to the student body announcing the university would extend the withdrawal deadline to Nov. 30 in place of the pass/fail option, claiming that it was in the interest of students’ graduate school or employment plans. Such a grading system also poses the risk of transcripts not reflecting students’ mastery of course material, Rankin added.

“While we understand the wish to once again see a relaxation of academic policies, there are a number of negative outcomes that result from adopting a pass/fail grading option,” Rankin wrote. “It is in the best long-term interest of our students to not make that change again.”

Hawk objected to Rankin’s description of the pass/fail option in the email as a “relaxation of academic policies,” arguing the option should be considered an “accommodation” for students.

“I was disappointed, because the goal was to make an equitable academic experience for every student this semester,” she said. “And I don’t think they were doing all that they could to make that happen.”

Representatives pointed to the growing number of COVID-19 cases and the number of universities across the country that have already chosen to implement similar grading options, including at least six Big Ten universities, according to the legislation.

Within the two hours before the vote on the resolution, Speaker Kislay Parashar said he had heard from more than 300 students who were concerned about the university’s decision. He intends to include their concerns with the resolution when he sends it to Rankin and university President Darryll Pines.

“It doesn’t hold the administration to anything,” Parashar said. “But I sincerely hope that they take a look at this [decision] again.”

Before the bill’s passing, Conway expressed her optimism and support for students’ advocacy for the pass/fail option in a tweet.

“Regardless of how this furthers, know that the student voice is powerful and always will be,” she wrote. “Under time of strife and scrutiny, students always found a way to see the light at the end of the tunnel. We never stopped advocating & will push through every pathway to see that light.”

For Alpert, however, the work to support students won’t stop with the pass/fail option. Moving forward, he plans to work with the university on finding ways to support departments so that they are better equipped to help students.