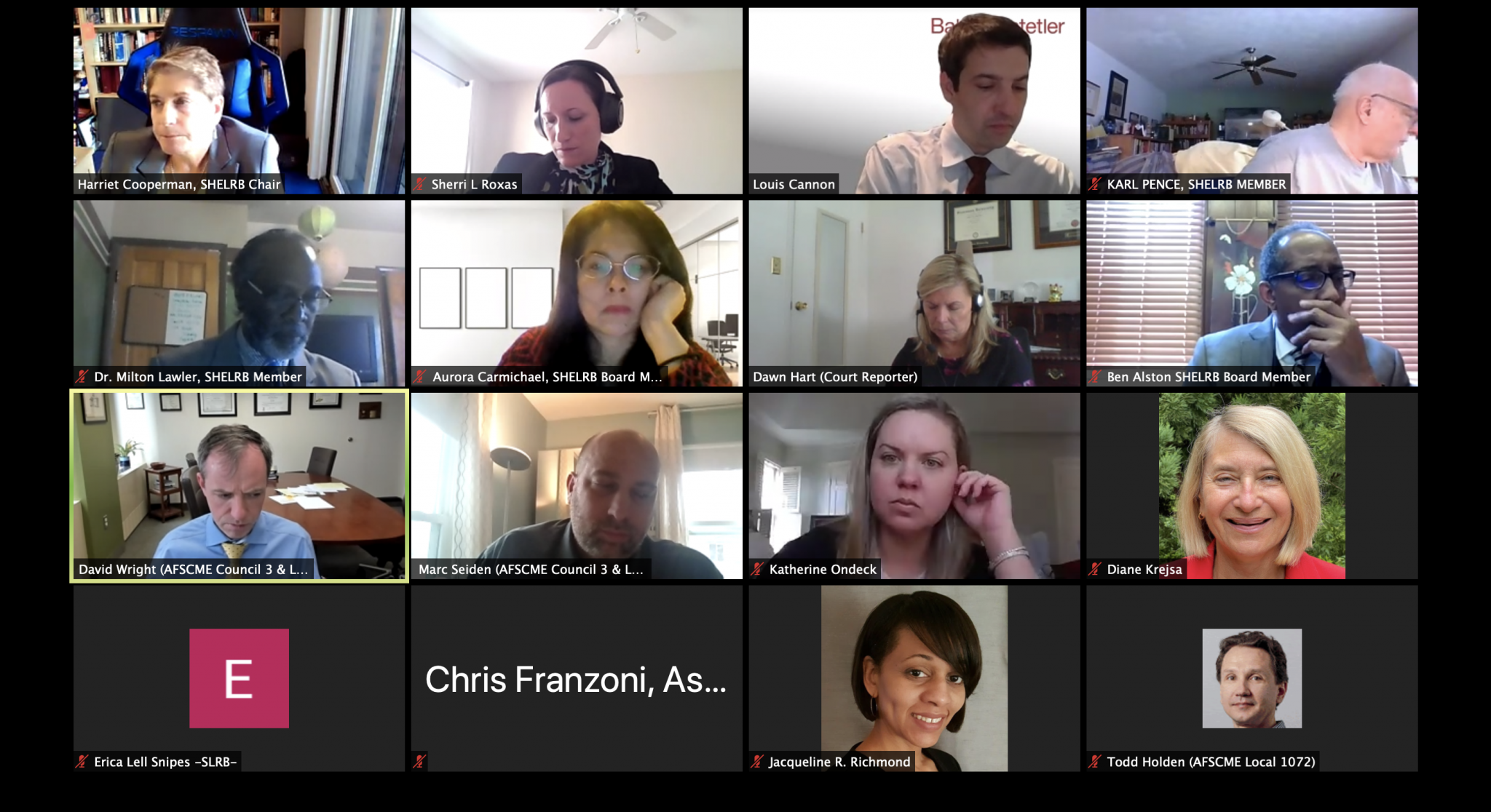 The state labor board hearing involving the union that represents University of Maryland employees continued this week. (Clara Longo de Freitas/For The Diamondback)

In the third day of a hearing on an unfair labor complaint against the University of Maryland on Wednesday, the university’s witnesses testified about interactions between the school and the union that represents university workers.

Last July, the union — the American Federation of State, County and Municipal Employees Local 1072 — filed a complaint alleging that housekeepers did not receive proper equipment or training to do their jobs safely during the COVID-19 pandemic. The board decided to move forward with the complaint in September.

The hearing, which ended Wednesday, was originally scheduled to last until Friday. The union and university will next deliver closing remarks before the board makes its ruling.

In the first two days of the hearing, the board heard testimonies from AFSCME’s witnesses, including a union organizer, an assistant director at the arts and humanities college and a campus bus driver.

Stuart Katzenberg, AFSCME Council 3’s growth and collective bargaining director, stressed the reasons he has — and continues to — push the university to bargain with the union.

“I didn’t want them to be on the wrong side of history in terms of COVID-19,” Katzenberg said.

On Wednesday, Louis Cannon Jr., an attorney at BakerHostetler who represents this university, called on the university’s witnesses.

Jacqueline Richmond, the assistant director of staff relations and labor management, was among those who testified Wednesday.

At the beginning of the pandemic, these calls were frequent, lasting at least an hour, Richmond said. Sometimes, there would be multiple calls in a week, in which they would discuss teleworking, contact tracing, testing, screening and a “number of COVID, health and safety issues,” Richmond testified.

The union reported concerns about enforcing social distancing and mask-wearing and ensuring maximum flexibility for teleworkers, Richmond said. Workers within the Department of Transportation Services raised concerns about the cleaning of the buses, she added.

In response to the concerns, Richmond said, the university contracted a new cleaning provider at a higher cost.

“I don’t recall there being any further complaints around that,” she said.

Maureen Kotlas, the university’s executive director of environmental safety, sustainability and risk, also testified. She oversees various programs, including worker safety compliance programs with the Occupational Safety and Health Administration. She’s part of various committees and task forces, she said, including some that were formed specifically for the COVID-19 pandemic, like the campus infectious disease management committee.

She was also part of the health safety and risk management task forces, which looked at regulatory requirements. They met at least once a week and provided recommendations, she said.

When housekeepers reported falling ill due to the heat and lack of air-conditioning in July, the task force recommended further training on symptoms of heat stress, Kotlas testified.

Andrea Crabb, the director of this university’s Residential Facilities, also testified. She was a member of the university’s fiscal planning task force, which assessed the financial impacts to the university in various reopening scenarios, she said.

Crabb was also involved in the efforts to provide personal protective equipment for employees. She was aware of the different concerns that AFSCME raised with regards to masks and cleaning products, she said, but she does not know whether any of those issues were resolved through written agreements.

Guidelines for social distancing were developed according to guidelines from the Centers for Disease Control and Prevention, she said. The university also followed guidelines from OSHA, Crabb testified.

The union recommended that the university give N95 masks to every employee, she said. The university provides N95 masks on a voluntary basis, she said. She does not know of any situations where an employee was denied an N95 mask.

She also said the university has “protocols” that ensure there is an inventory of N95 masks, she said, but they maintain and monitor their stock.