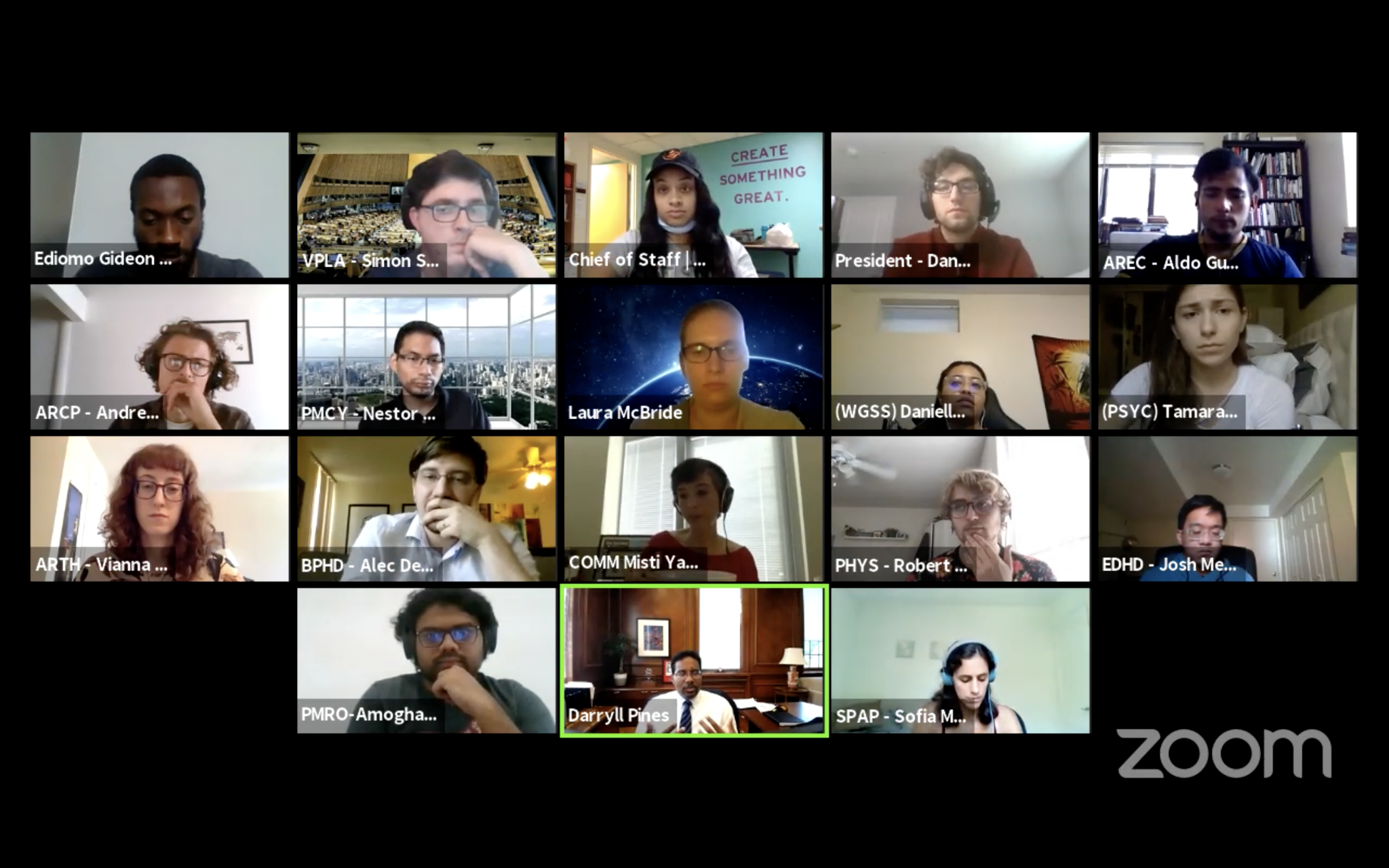 Pines also praised a nationwide movement of lawsuits against the U.S. Immigration and Customs Enforcement, following an announcement that students on F-1 and M-1 visas — academic and vocational visas, respectively — would not be able to enroll in a full online course load and remain in the country.

Over the summer, in response to that announcement, the Graduate Student Government issued a statement, calling on state, local and federal officials to help international students at this university.

“It goes to show you the power of a movement, the power of voices,” Pines said. “So don’t ever forget that you guys led that effort to shut that down and it worked, and it’s amazing how fast it worked.”

Two representatives, however, noted that several international graduate students are still stuck overseas as a result of the pandemic. These international students were told that, unless they go to the U.S., they will not have access to their assistantship funds, said Alec Dennis, a business management representative.

“What [could] the university … do in order to try to help really students who, through no fault of their own, are unable to make it onto our campus?” Dennis asked.

In response, Pines reminded representatives that he was one of the presidents and chancellors that sent a letter to the Office of Immigration, asking them to expedite visas for all international students. He also suggested the crisis fund.

A new increment to the fund is under negotiation right now, he said, under the CARES and HEROES acts. If approved, the university would receive about $20 million for undergraduate and graduate students.

“It might help those who are in need going forward,” he said. “I don’t think we’ll get everything that we want, but I think we’ll get somewhere between $10 and 20 million.”

Dennis also asked Pines whether there was a legal requirement that forbids this university from paying students the money they were entitled to under their initial offer letter. Pines responded, saying graduate assistantships depend on departments’ financial ability and citing the university’s current financial crisis.

“You have to understand that sometimes there are things we just can’t do,” Pines said. “And this might be one of those times where we’re not able to help.”

But Pines also said he does not know much about the issue of international graduate students abroad not receiving their assistantships. He will look into the details, he said.

Sofía Maurette, a Spanish language and literature representative, asked how the university was going to support graduate students who are struggling to balance work, education and child care.

Pines said the university is developing a new approach to help child care services for employees, graduate students and others connected to the university.

“We know that the child care facility that we’re about to open is not sufficient, and also expensive,” he said. “So we’re trying to find an affordable, safe and workable solution for every, at least for many folks on our campus.”

Additionally, Pines acknowledged that the number of mental health support requests have increased exponentially. He has asked Georgina Dodge, diversity and inclusion vice president, and Patty Perillo, student affairs vice president, to submit proposals to expand mental health programming by next week. It will likely be an investment of several hundred thousand dollars on staffing, counseling and other programs across the university, Pines said.

Before the conversation with Pines, the GSG passed a resolution that calls on Pines and the University System of Maryland’s Board of Regents to better allocate graduate student fees during the coronavirus pandemic. They also called for increased funding of mental health and food security resources and/or a reduction of graduate student fees.

“Where would the extra funding come from with a university that’s already millions in debt?” Posbergh asked.

But Dennis thought that it was imperative to pass the resolution today, even if the resolution would likely be better written if given more time to work on it.

Additionally, the GSG unanimously passed a resolution creating an International Student Affairs Committee. The committee will advocate on behalf of international graduate students at the university, local, state and federal level.

“It has been a lot more salient now in pandemic that international students do need a bit more of a specific approach to their situation,” said Cristina Riquelme, economics representative and author of the resolution.

The body also created a committee that will plan the Graduate Research Appreciation Day, an event co-sponsored by the graduate school where graduate students can showcase their work. Ediomo Eggah, the director of operations, will be chairing the committee.