Stress, bad food and flooding: What it’s like to be a UMD student in quarantine housing 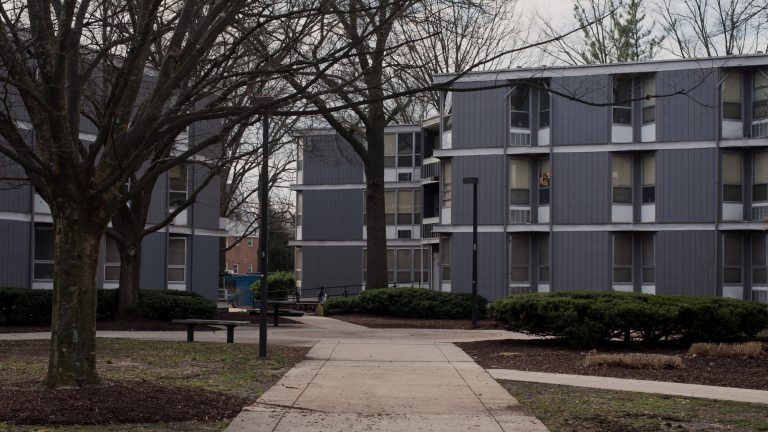 Just three days after Ally Godsey found out she had tested positive for the coronavirus, her apartment in the Leonardtown Community, one of the areas at the University of Maryland designated as isolation and quarantine housing, began flooding.

Nearly two inches of water coated her bathroom floor, spreading past the point where bathroom tile meets bedroom carpet. Sewage had also sprung up from the bathroom’s shower drain, a result of the flash flood that swept through College Park earlier that day.

“I can honestly say I’ve never been more thankful not to have a sense of smell,” Godsey, a sophomore hearing and speech sciences major, joked as she recorded the event in a TikTok.

As the number of positive coronavirus cases mounts during the first weeks of the semester, students who test positive or are exposed to the virus are being rushed to isolation or quarantine housing. And for the more than 100 students who are currently housed inside those buildings, their stays have been marked by stress, loneliness and three meals dropped outside their doors every evening.

In an email, a university spokesperson provided links to school webpages with information about isolation and quarantine housing but did not comment on the quality of the housing beyond that.

According to the Division of Student Affairs’ website, the university urges students to quarantine or isolate at their permanent homes, if possible. Students who are unable to do that are moved to designated isolation or quarantine housing — which includes two apartment complexes and three on-campus chapter houses, according to the Department of Resident Life — where they are given linens, cleaning supplies, meals and a case of water.

Students who tested positive for the virus are required to stay in isolation housing for at least 10 days, whereas students who were exposed to the virus are cleared to leave quarantine housing after 14 symptom-free days. Every student sent to quarantine or isolation housing is also assigned a case manager who completes daily check-ins with their residents until their stay is over, according to the Division of Student Affairs.

Zach Hermann, a freshman psychology major, woke up with body aches and a fever last Thursday. After reporting his symptoms to the daily symptom checker and receiving a test from the university, he was unsure what the next steps were — and he said the university only added to the stress.

Hermann said he wanted to enter quarantine housing as soon as possible, so he could start and end his isolation period. But the university insisted he would have to quarantine in his dorm until he received his test results, he said.

Meanwhile, Hermann added, one of his friends — who was exposed to COVID-19 the same day he was and received a test the same day he did — was allowed to enter quarantine housing that day.

“It was weird. It was confusing to me,” Hermann said. “It was extremely stressful.”

Hermann said he didn’t know how self-isolating in a dorm room would work either, since there would be no way to use the communal bathrooms or get food from the dining hall. But luckily, he never had to; after asking if he could move into Leonardtown that evening, the university allowed him, he said.

Godsey said her quarantine move-in experience was frantic as well. In just a few hours, she had to take her belongings out of her sorority house and into Leonardtown — which she didn’t know how to get to —  all while making phone calls and dealing with the reality of having COVID-19.

“I didn’t know anyone who had ever had it or lived through it or like anything like that, so it’s a really scary diagnosis,” Godsey said.

And the lifestyle that Leonardtown offers hasn’t been particularly enjoyable for its temporary residents. Since moving out of her flooded apartment and into a new one, Godsey now spends her days in an apartment she said is too spacious for one person, occupying herself with schoolwork.

“It’s got everything I need but it’s just such a big space. And it’s so lonely when you’re in here alone, all day everyday,” Godsey said.

Hermann, too, said he expected loneliness to set in quickly — something he hopes his long list of movies to watch, including Being John Malkovich and Spotlight, can combat.

Some of the students described the meals provided as “low quality,” as well.

One of the dinners given to Hermann — an amalgamation of red sauce, cauliflower and pepper, all stuffed into a brown to-go box — smelled weird and didn’t taste great, he said. So he decided not to eat it.

And for students who don’t have meal plans, such as sophomore journalism major Ross O’Keefe, the meals come at a cost of $21.25 every day.

However, O’Keefe said, he doesn’t mind the quality of the food because he didn’t expect them to provide any food at all. He’s just thankful the university offered him housing and meals.

And, he added, he’s content with going on his computer and entertaining himself in that way. But the lack of freedom at Leonardtown still feels odd.

“It sucks not having any freedom, and you’re sort of just weighed down with that,” O’Keefe said. “You realize obviously it’s for the greater good, but, you know, it still feels like you’re an outcast somehow.”

Rebecca Scherr, a freshman English and government and politics major, spent only one day in quarantine housing, from Friday afternoon to Saturday afternoon, before calling her parents to bring her home. The food she was given that Friday evening didn’t look very appetizing, she said, so she instead decided to subsist on the snacks she brought with her.

And the decision to go back home was by no means an easy one, Scherr said. Her parents regularly pick up groceries for her grandparents, she said, which is why she initially chose to stay in Leonardtown.

“Maryland has been doing their best, but I think there are a lot of things here that they don’t handle well, because there’s so many things they have to deal with,” Scherr said. “When it comes to individual students, a lot of us feel like some aspects of our life in quarantine have been neglected by the university.”