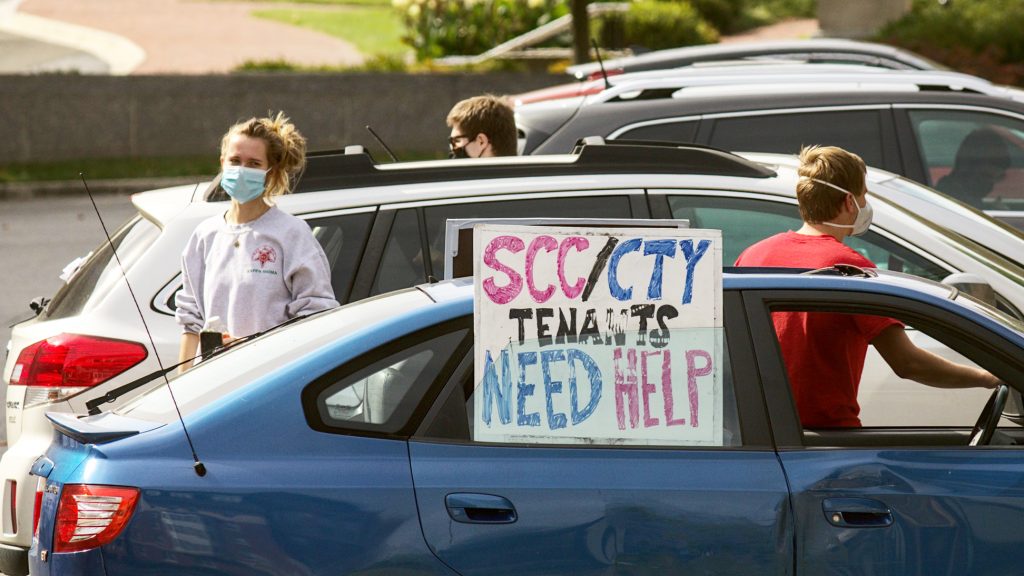 For the past six months, University of Maryland students living in South Campus Commons and Courtyards have fought to terminate their leases in an academic year derailed by the coronavirus pandemic.

In December, the university reached an agreement with MEDCO, the state-run private entity that manages Commons and Courtyards, as well as apartments at Towson University.

The agreement includes several provisions students pushed for, including forgiving the fall rent payments of students who submitted a lease cancellation request before 12 p.m. on Aug. 12. Additionally, students who paid rent but did not move in during the fall have been given a credit for the spring semester.

But the resolution only provides relief for the first five months of a 12-month lease term, holding students financially responsible for the remaining seven monthly installments — the period from Jan. 1 to July 31. If a student wants their lease fully voided, they must re-lease their unit to someone else.

And some students who are legally bound to their leases remain dissatisfied.

“It’s just a mess,” said Hannah Aalemansour, an organizer for the student group that has advocated for the termination of leases, UMDTenants.

[Without help from the administration, UMDTenants turn to Maryland politicians]

However, the task of finding interested students has proven to be a challenge for many leaseholders, including senior individual studies major Alyssa Shermer.

Shermer has sent more than 100 Facebook messages to prospective leaseholders, but none have gone through. Most students who respond have asked for a discount on the monthly rent — which can range anywhere from $957 to $1,300 at South Campus Commons — but Shermer said she can’t afford to do that.

“Nobody wants to sublease from us,” Shermer said. “There’s not enough students looking to be on campus right now.”

Leaseholders are also frustrated with the disparities between College Park and Towson’s agreements. The differences contradict initial statements from this university’s administration and finance vice president Carlo Collela that the resolutions would be “very consistent” with one another.

At Towson, MEDCO manages three different housing facilities. For the two facilities designated for underclassmen, which feature shared bedrooms, Towson’s administrators requested that occupancies be limited to one person per room during the spring semester. This allowed some students to terminate their leases for this semester.

In College Park, though, students are already beginning to see payments pile up again, including senior linguistics major Emma Panek, who had her fall rent payments forgiven.

Though Panek is uncertain of the legal consequences, she said she will not be paying rent for the spring term.

“It’s still really unclear,” Panek said. “Me and a lot of other people, we’re just not paying. That’s pretty much our only leverage over the situation.”

For these students, going to court — a possibility that has loomed since the summer — may be one of the only viable options left.

After the College Park agreement was finalized, MEDCO reached out to leaseholders offering them two options: They can either sign a document acknowledging the terms of the December agreement, or they can instead choose to legally defend themselves. But students who choose the latter will not have the option to re-lease their units, Aalemansour said.

The proposition has left leaseholders with a tough decision between trying to re-lease, perhaps unsuccessfully, and gearing up for a legal battle.

“It truly comes down to how much of a loss do I want to take and how long do I want to deal with this,” Aalemansour said.

MEDCO also made some financial sacrifices to make the agreement possible.

The loss in revenue is expected to produce a deficit for MEDCO of over $6 million for the 2021 fiscal year, according to the agreement’s text. As a result, MEDCO may have to breach contracts made with the investors who help finance its properties.

The company also lost millions of dollars last spring, after refunding students who were sent home due to the pandemic.

The university will be sharing this burden as well: As part of the agreement, MEDCO is permitted to defer some of their payments due to the university — funds used for certain services at Commons and Courtyards — until they can be repaid in future years, according to a university statement.

But notwithstanding these adjustments, the inconsistencies in the College Park agreement indicate MEDCO still has work to do, state delegates say.

During a Jan. 28 Maryland General Assembly subcommittee meeting, state delegates and senators probed the ongoing leasing issue, questioning why Towson students are allowed to roll over their credit to future academic years while College Park students are not.

“We’re still working through some of the exceptions that have come about,” Jeff Wilke, one of MEDCO’s directors, said during the meeting. “There’s been a lot of communication between the management company and the individual students surrounding the circumstances for each particular individual.”

While state delegates and senators applauded MEDCO — and in particular, executive director Bob Brennan — they emphasized the need to tie up loose ends.

Many student leaseholders, meanwhile, continue to wait in legal purgatory.

“It’s just really sad, especially as a senior,” Panek said. “It has just really snowballed into this weird, nebulous thing where no one really knows when it’s gonna end.”