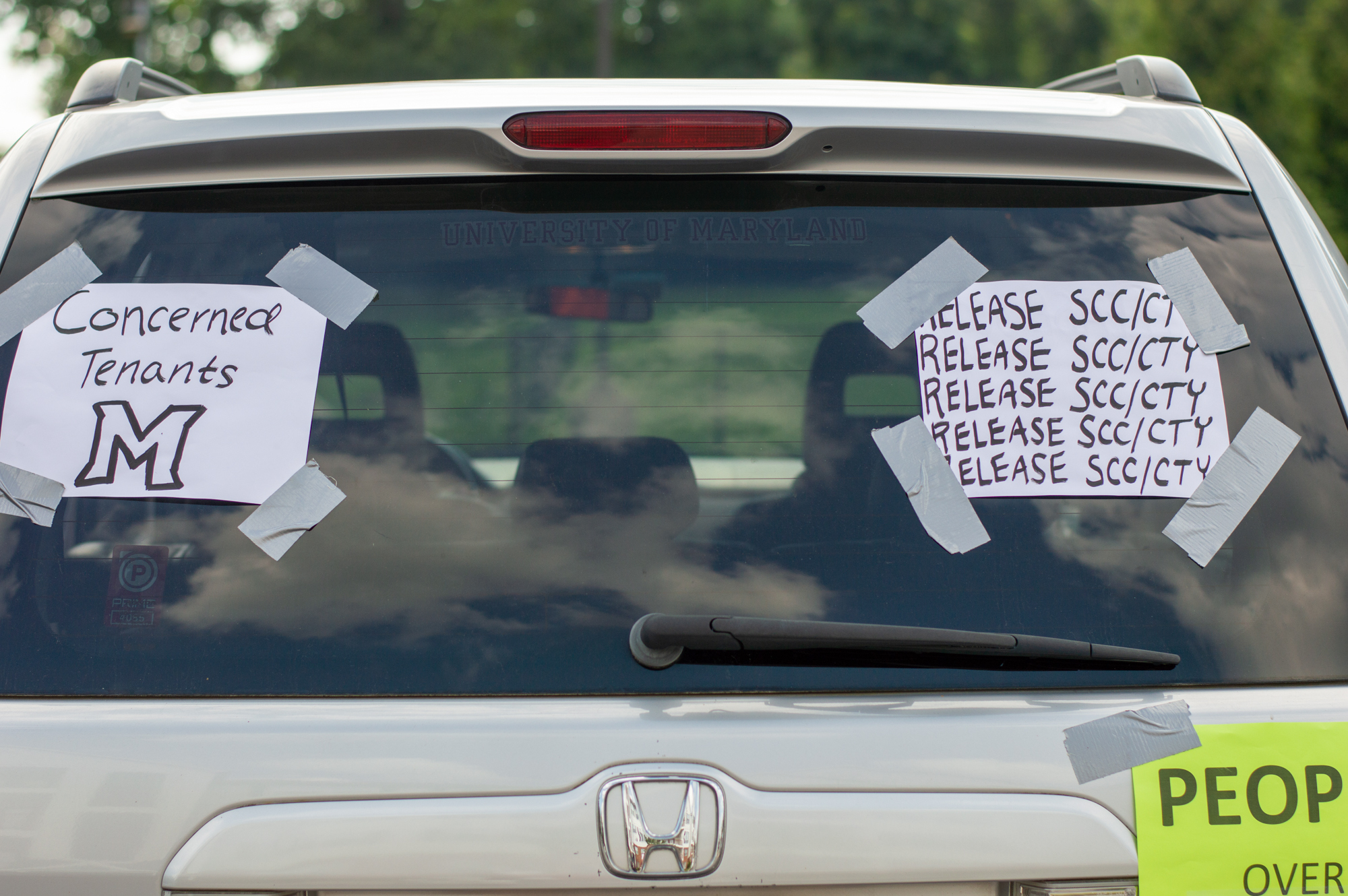 Posters attached to a car at the caravan protesting for students to be able to terminate their leases with South Campus Commons and The Courtyards on August 10, 2020. (Joe Ryan/The Diamondback)

For months, they’ve had the support of state legislators. Now, with just weeks to go before the end of the semester, the University of Maryland students leading the charge to free themselves and their peers from leases with on-campus apartments have the support of student legislators, too.

The Student Government Association passed a resolution during its Wednesday meeting calling on university administrators to work with MEDCO, the state-run private entity that currently owns the apartment buildings, to develop a policy that will allow tenants to review and opt-out of their leases — something they didn’t get the chance to do over the summer, even after the rules and regulations section of their agreements changed.

Two students wrote in to the body to support the resolution, citing the stress the situation has caused them and their families. Before representatives voted on the legislation, Speaker of the Legislature Kislay Parashar read the students’ comments out loud.

“We have been dealing with this burden for far too long,” one note read. “Assuming the risk of death should not morally be classified as an addendum.”

The resolution passed 30 to 0, with one abstention.

In July, with just weeks before the first month of rent was due, more than a thousand students signed onto a petition demanding South Campus Commons and Courtyards release them from their leases. Some said living on the campus wouldn’t be worth it with classes mostly online. Others raised health concerns, pointing out that they had signed their leases in February, when the coronavirus was just beginning to encroach upon the country.

Since then, nearly 150 students from this university and Towson University have retained a legal team to fight on their behalf. They’ve built a social media campaign to pressure the university to take action and enlisted the help of lawmakers. Even Maryland Gov. Larry Hogan chimed in.

But the student advocates say nothing has changed. With the backing of the SGA, senior Hannah Aalemansour expressed hope the administration may feel pressure to take further steps to support the tenants.

“Now they have a greater audience who has deeper ties to state and local government than we do,” she explained. “[The SGA has] more substance to their words. It’s not just a bunch of angry students now.”

In an interview with The Diamondback last month, university President Darryll Pines said since the students have retained a lawyer, the school can no longer engage in open conversation with them.

However, since Pines appeared on the Kojo Nnamdi Show over the summer to address questions about the school’s reopening plan, he has maintained that the university has tried to work with MEDCO and Capstone On-Campus Management — the company that collects payment from the tenants — to find a solution for students.

Still, the fact remains, he said: Although the apartment buildings are located on the university’s property, the school does not control how Capstone and MEDCO operate their leases.

“It’s unfortunate because we obviously care about our students, and we care about the tenants of these places,” he said in an interview last month.

Additionally, according to a statement a university spokesperson sent to The Diamondback last month, the school contacted 800 students on the dorm waitlist about the possibility of taking over leases in Commons and Courtyards in an effort to help students trying to re-lease their apartments.

MEDCO Executive Director Robert Brennan has also said the company would not take any “aggressive collection measures” against students who have not been paying rent. However, tenants could still end up having to pay the sum of their missed payments, and possibly a late fee, if the company’s investors ask for the money.

It took a month, but Aalemansour eventually got out of her lease. But she says many students weren’t so lucky. And for those who haven’t been paying rent for an apartment they haven’t occupied all semester, she says the stress of the situation is exacting a toll on their mental health.

“We hear so many apologies every week, saying, ‘I’m so sorry I’m not as involved, it just really stresses me out, I get anxiety when I think about it,’” she says. “So it’s really been a community effort to keep this fight going because otherwise, the people who are most affected by it would not be able to.”

“Why would the university — why would the state — allow such a burden on students, when their priority is staying healthy in this pandemic and completing their education?” she added.

The astronomy and mechanical engineering major was never able to successfully release his apartment or get out of his lease. He also hasn’t paid rent all semester.

It’s been stressful, he says. And while seeing support pour in from the SGA and state delegates has been encouraging, he says it’s also been tiring to watch the situation remain the same.

“Nothing’s really happened,” he said. “While I definitely appreciate Hogan speaking out and the SGA and everybody, we really have to get this to actually be resolved. No matter how many times people say it’s a great cause and everything, we need material help.”