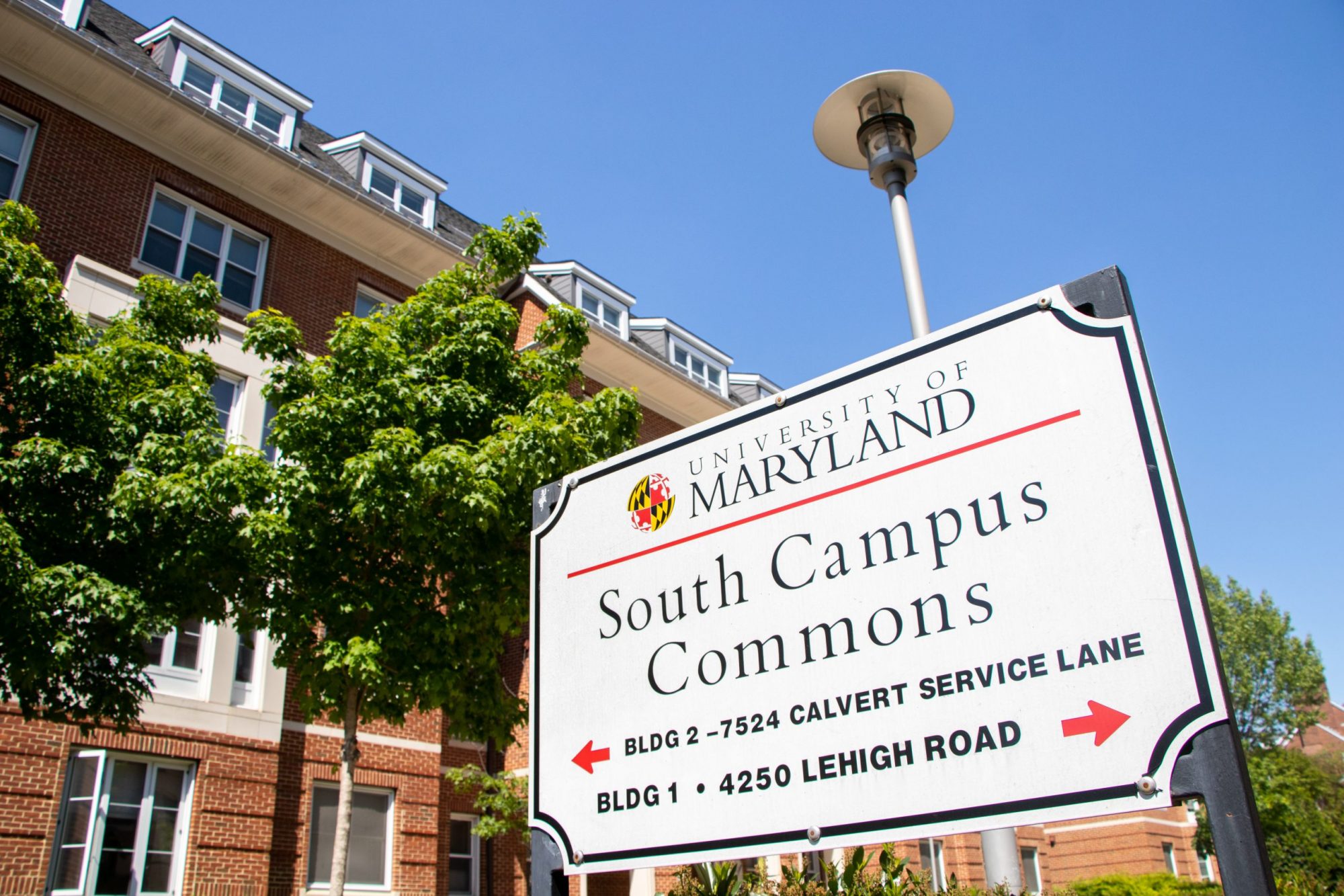 Many students who planned on living in South Campus Commons during the 2020-21 school year are now scrambling to re-lease their apartments. (Julia Nikhinson/The Diamondback)

Emma Denlinger is all too aware of just how serious a threat the novel coronavirus is.

Her mom is a physical therapist, and she’s currently helping patients recover from strokes they experienced after testing positive for COVID-19. Denlinger also recently took the MCAT, so facts about just how nasty viruses are and how fast they can spread are fresh in her mind. And, she knows COVID-19 hasn’t limited its carnage to the elderly.

So, Denlinger says, there is no way she’s coming back to the University of Maryland’s campus in the fall. But, even though the rising senior won’t be on campus, she’ll still be on the hook for thousands of dollars in rent for her apartment in South Campus Commons — even though it will likely be sitting unoccupied.

Earlier this month, angry and desperate, Denlinger signed a petition demanding that residents at the university’s two on-campus apartment complexes — Commons and Courtyards — be allowed to terminate their leases. Then, she found herself in a group chat with nearly 200 other members, many of whom were facing similar predicaments.

“I just remember being like, ‘Oh my gosh, other people are in the same boat as me!’” said Denlinger, a physiology and neurobiology major. “I was really excited.”

Over the last two weeks, students involved in the chat have reached out to multiple lawyers, flooded social media feeds and organized two email campaigns to draw attention to their plight.

In the first “Terrapin Power Hour,” more than 100 students emailed lawmakers and university administrators, as well as officials at Capstone On-Campus Management — the company that manages the two complexes.

And, most recently, the coalition has urged students who feel trapped in leases with the apartment complexes to file complaints with the Consumer Protection Division at Maryland’s Office of the Attorney General, which provides mediation services to help resolve issues between businesses and customers. As of Thursday morning, the division had received 26 complaints against Capstone, most of which were filed this week, a spokesperson for the attorney general’s office wrote in an email.

The students are firm in their resolve: By Friday, they want the ability to cancel their leases without financial penalty, said Julia Kane, a rising senior majoring in marketing and operations management and business analytics.

Denlinger chimed in: “Not only we want it, we demand it.”

In a statement Capstone’s chief marketing officer emailed to The Diamondback on Tuesday, the management company acknowledged that it had received an increase in requests for lease cancellations since the university announced it would be offering most classes online in the fall.

The Maryland Economic Development Corporation — owner of Courtyards and Commons — “understands and appreciates” the context in which these requests are taking place, the statement read. And, according to the statement, Capstone will continue to assist students in transferring their leases to individuals who are interested in taking over their apartments.

However, MEDCO cannot release all students from their leases, since it is not eligible for any currently available federal relief programs and has obligations to its “bond holders, vendors and other entities,” according to the statement.

“While MEDCO understands some students may choose to depart from the community while continuing their studies, South Campus Commons and The Courtyards remain open and fully operational, continuing to support those who remain,” the statement read.

But Kane says she successfully terminated her lease with Commons after she and her father — a lawyer — spent hours on the phone, arguing with staff in the leasing office and this university’s Department of Resident Life.

Afterward, with the help of her dad, Kane posted a lengthy explanation on Instagram of how he had gotten her out of her lease. As of Thursday night, her post had been liked over 600 times.

According to the document Kane posted online, his arguments centered on revisions Commons and Courtyards made to the “Rules and Regulations” sections of their leases on July 13. Among other conditions, residents must now agree to leave their assigned unit to isolate or quarantine if requested and “voluntarily” assume the risk they may contract COVID-19 on the campus and sicken or die.

In an email to residents earlier this month, the management team for the two apartment complexes stressed that these updates did not alter the lease agreements held by students. Leases for these complexes state that the rules and regulations are “subject to modification by the Landlord” and the “Tenant shall be bound by all such modifications upon notice.”

But Kane says her dad claimed the revisions represented changes to the lease agreement — which, according to the lease, are only binding if they are signed by both the landlord and the tenant.

“This is insane that they’re going to take all of these measures, change their wording and essentially try to force us into something that we didn’t agree to,” she said.

Capstone did not respond to request for comment on Kane’s experience.

Students aren’t just calling on Capstone and MEDCO to cut students free from their leases — they’re also pressing administrators at this university to extend assistance to those who want out.

In an email, university spokesperson Hafsa Siddiqi described the university’s relationship with the apartment complexes: Though Capstone manages leasing, maintenance, service desk operations and all financial matters at Commons, the company contracts Resident Life to run its residence life program. At Courtyards, Capstone runs residence education programming, in addition to facilities and maintenance.

“We are in constant conversations with them to find an approach and solutions to the fact that possibly some of our tenants, our students, may want to get out of their leases,” Pines said. “It’s hopeful that in the next few days, we will have some solutions for you.”

Some students assert that the school’s relationship with the two complexes is stronger than it would care to admit. Rising senior Gavin Kohn pointed out that not only are the apartments on campus, but you have to be a student enrolled at the university to live in them. He also highlighted the fact that Commons and Courtyards residents were required to move out of their apartments by the same date as students in dorms in the spring.

“At the very least, UMD could say, ‘Capstone should free the students,’” said Kohn, an astronomy and mechanical engineering major. “They could say that we’re not going to renew our contract with you — there are a few things that they can do, even if they’re not as in control.”

Kane agreed. Every person who lives in the two complexes is a student, she said.

“They have clearly vested interest in our well-being,” she said. “Or, at least they should.”

[Living in a UMD dorm this year requires agreeing to new terms. Some say they’re unfair.]

Classes are set to start at the university in a month, but another deadline is looming for students who signed leases with Commons and Courtyards: Rent is due Monday.

At the end of the day, students involved in the pushback efforts said they decided not to encourage renters one way or the other to write a check. Instead, they’ve been telling residents to talk things over with their parents and seek legal consultation before making a decision about whether to pay the first month’s installment of rent.

Denlinger is still conflicted. She’s spoken with a few lawyers, and they’ve had mixed opinions on the matter. Though she doesn’t want to tank her credit — she’s trying to go to medical school, and is going to have to take out loans — she also doesn’t want to consent to a lease that she says she hasn’t agreed to and is actively fighting against.

Meanwhile, she’s recently found one cause for hope: After searching for “forever,” she may have finally connected with somebody who is willing to take over her apartment’s lease. She’s still holding her breath, though, since there’s a chance things won’t work out.

But even if they don’t, Denlinger says she’ll stay home — even if that will mean sending thousands of dollars down the drain.

“It’s not worth it for me to risk my family’s health and my health,” she said. “It’s just not worth it.”