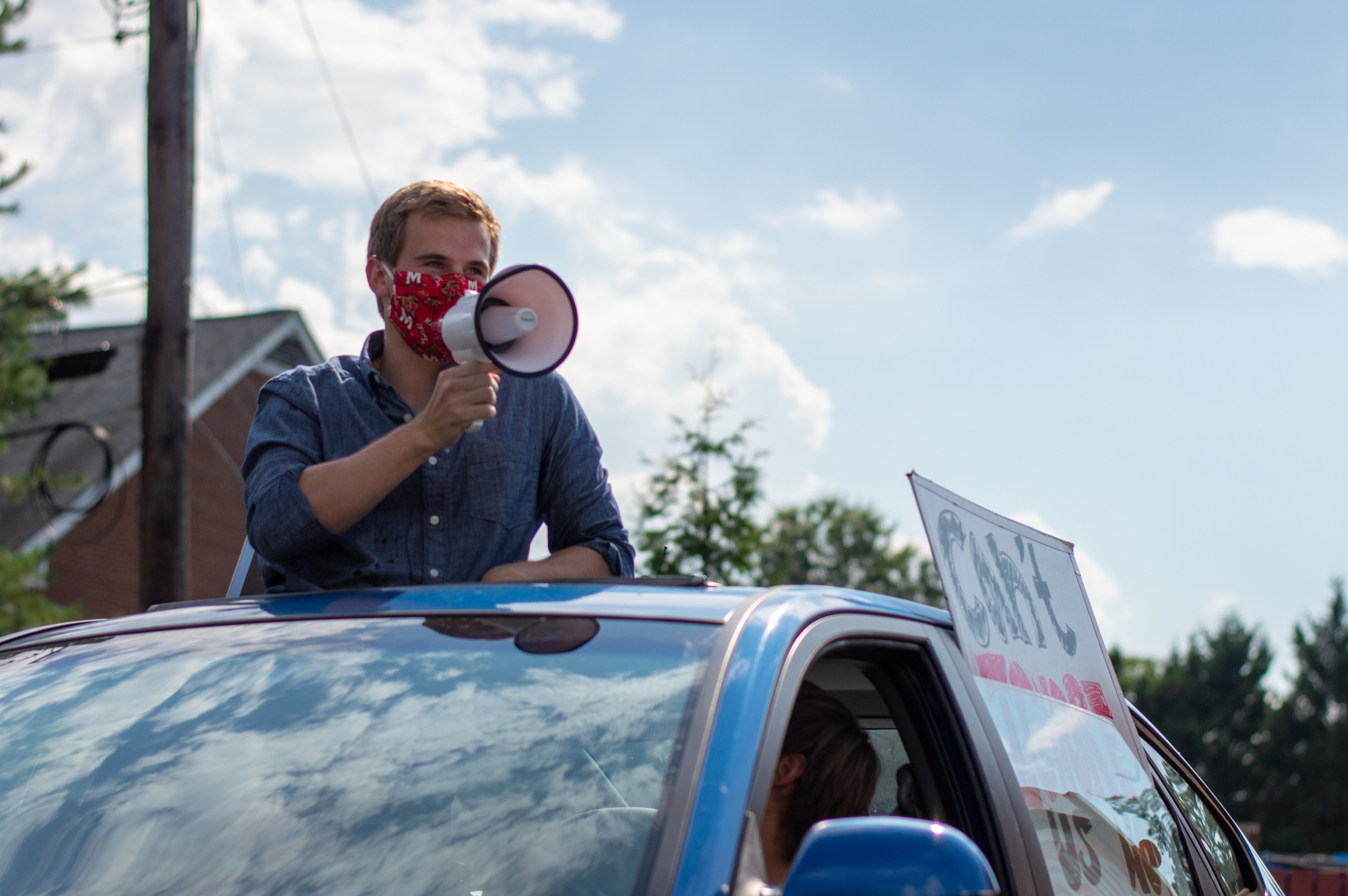 Gavin Kohn speaks to drivers at the caravan protesting for students to be able to terminate their leases with South Campus Commons and The Courtyards on August 10, 2020. (Joe Ryan/The Diamondback)

After weeks of juggling calls with lawmakers and pleading with university officials to take action, more than 100 University of Maryland students fighting to terminate their leases with on-campus apartment buildings have retained legal assistance to take their battle to the next level.

On Monday afternoon, two lawyers from the Greenbelt law firm representing the students emailed a letter to the owners and managers of Courtyards and South Campus Commons, identifying the students’ leases as invalid and notifying the companies’ leadership of the contracts’ “immediate termination.”

“Hopefully we could have some kind of reasonable discussion, and that this matter can be settled between the parties and not have to go before a judge,” said Leonard Lucchi, one of the two lawyers retained by the students. “But, if it has to happen, we’ll vigorously defend them in the courts.”

A spokesperson for Capstone On-Campus Management — the complexes’ manager —  did not respond to request for comment Monday.

However, in a July 24 statement provided to The Diamondback, the management company said the Maryland Economic Development Corporation — the buildings’ owner —  is unable to release all students from their leases due to its obligations to “bond holders, vendors and other entities.” MEDCO is also not eligible for any federal relief program currently available, according to the statement.

Similar to previous arguments voiced by students, much of the firm’s letter revolves around adaptations made last month to the rules and regulations section of residents’ leases. According to the updated rules — which were changed without student input — residents must “voluntarily” assume the risk they may contract COVID-19 on the campus and sicken or die. Apartment managers may also request that a student leave their assigned unit under the revised regulations, if their “continued presence in that unit poses a health or safety risk.”

The management team for the two apartment complexes has said that these changes do not alter the lease agreements held by students, since the rules and regulations section of leases are “subject to modification by the Landlord.” But Lucchi and his colleague, Kate Pruitt, argue the updated rules contain “new and material” requirements and conditions — which, according to the lease, are only binding if they are signed by both the landlord and the tenant.

In the letter, Lucchi and Pruitt also argue that language in the revised rules and regulations signal that MEDCO admits it will be unable to provide safe and habitable apartments to residents — as required by the lease. According to the updated rules, not all units may be appropriate for self-quarantine or isolation, and students may not be permitted to continue living in their assigned room, should they be required to do either.

The rules go on to say that alternative housing may be provided to students “as needed and if available” — language the lawyers interpret as MEDCO acknowledging its possible inability to deliver any apartment at all to a student.

As such, the lawyers write, the students they are representing will not pay any further rent or charges to MEDCO. Those who already made payments to the corporation additionally demand a refund, the letter says.

Besides flooding the inboxes of Capstone and MEDCO officials with emails, students fighting to get out of their leases have repeatedly called upon university leadership to advocate on their behalf. The two apartment complexes are located on university property, and Capstone contracts the university’s Department of Resident Life to run the residence life program for South Campus Commons, a university spokesperson wrote in an email last month.

Reached over email Monday, a university spokesperson did not offer any further information for attribution.

Earlier this month, university President Darryll Pines signed onto a letter with College Park Mayor Patrick Wojahn, encouraging local landlords to consider allowing student renters to terminate their leases or sublet to those who wish to live in the area. However, besides striking an optimistic tone in an interview on The Kojo Nnamdi Show on July 23 that a solution may be forthcoming, Pines hasn’t addressed the ongoing lease struggle, students say.

And, in a campuswide email Monday, Pines announced the start date for in-person classes will be delayed by two weeks, citing a surge in COVID-19 cases in Maryland and Prince George’s County. Pines also wrote that the deadline for confirming housing in dorms has been extended to Aug. 12, adding that the decision for returning to campus is a “complex” one.

“I urge every student to have a thoughtful conversation with their families and loved ones and decide what is right for them,” Pines wrote.

But for many stuck in unwanted leases with on-campus apartments, this decision can feel impossible: Should they risk their health to live on campus? Or, should they continue paying rent for an apartment they’re not using?

“It seems as though this in-person class date is going to continue to be pushed back as we go along, until the point where there are no in-person classes during the semester,” she said, further identifying the email as a “slap in the face.”

Shortly after Pines’ email hit campus inboxes, around a dozen cars — horns blaring — drove from Courtyards to the Administration Building to maintain pressure on leaders from MEDCO, Capstone and the university to address the plight facing begrudging lease holders. One student, rising senior Gavin Kohn, hung out of a sunroof, shouting through a megaphone.

They intend to keep pestering officials, too, Kohn said, adding that there have been talks of repeating the caravan protest at the state house. And Pines’ relative quiet on the situation just goes to show why Monday’s protest was important, he said.

“It’s hard to keep ignoring us if we’re outside your office,” he said.