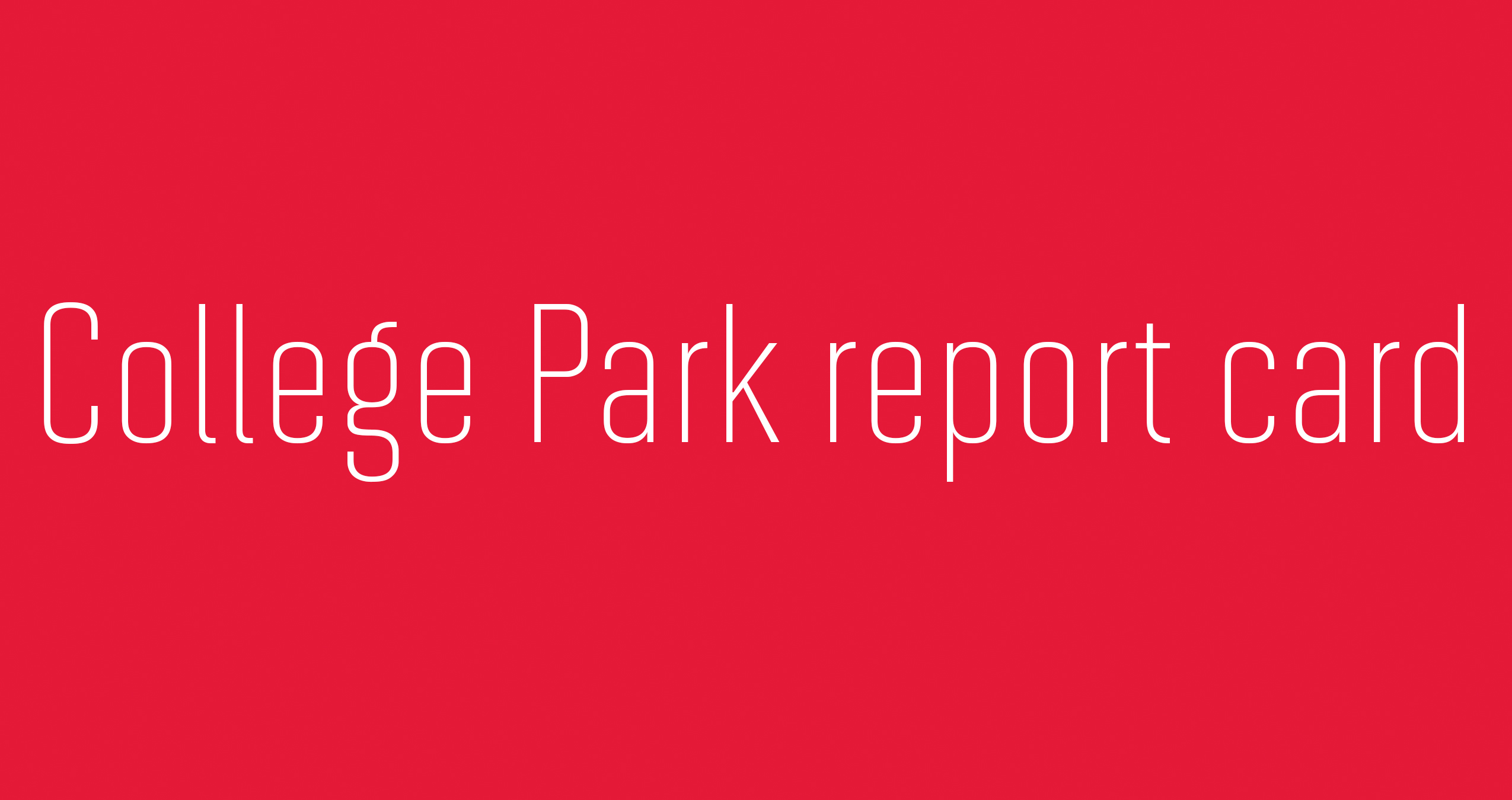 Every year, The Diamondback hands out grades for the key institutions at the University of Maryland and the city of College Park. Here’s our report card.

The University of Maryland’s administration has been reamed out this past year — for good reason. Almost a year ago, football player Jordan McNair died of heatstroke, a condition that’s completely survivable with proper treatment.

An outside report found that the administration failed to properly monitor the department and put a stop to abuse in its football program before McNair’s death. After the tragedy, the university took five months to fire the trainers who failed to treat him, and it paid out football coach DJ Durkin $5.1 million when he was fired. After all this, university President Wallace Loh infamously flip-flopped on his retirement, underscoring the lack of accountability in the administration.

Then there were the issues with facilities, including mold outbreaks that caused illness among students and housekeepers and decrepit dorms lacking air conditioning that the university has backed out of demolishing next year.

Adding to its issues, this university took six months to find a permanent Title IX director. And though its sexual misconduct reports reached record highs for the previous academic year, the number of investigations hit their lowest point in the office’s history.

There has not been much progress with the issues this university experienced last year — regrettably, we haven’t seen anything this year to make us think it’ll get better any time soon.

This year has been one of growth for the College Park City Council, weighing in on plans to build a new Hillel Center, approving plans for a childcare center and overseeing construction on a park in North College Park. Unfortunately, it’s had a bad record for staying on budget for more ambitious projects, such as plans for a community garden and the contentious City Hall redevelopment. Thinking big is exciting, but it’s just as important for the council to understand where its money comes from — though projected costs change in the planning process, large fluctuations in the body’s financing plans are undesirable.

There’s been tension between the graduate school’s administration and students. Most significantly, Dean Steve Fetter has opposed the collective bargaining bill that graduate student activists have been pushing for years.

As graduate students push for more autonomy in navigating byzantine fee structures and financial stressors, the Graduate Student Government said outright that this university and the University System of Maryland “don’t care” about the resolutions they’ve passed. While there’s been moves to hire an adviser to help graduate students with health issues, probably the healthiest thing this university can do for the graduate school is to stop thinking it knows best.

It’s been a rough year for the Student Government Association. In November, it held the chaotic and misguided “Justice for Jordan” rally, at which then-SGA President Jonathan Allen and other student leaders implored students to attend football games — at a time when an outside committee found widespread abuse within the football program.

While players on the team had called for more support at their games in light of the scandal, the SGA’s call for higher attendance didn’t focus on the more pressing issue: pushing for solutions to the issue at hand. In fairness, Allen was later influential in the recently-passed law for Board of Regents reform, helping to make the body more transparent in light of its mishandling of the situation.

In response to student groups’ frustrations with the organization following the rally, the SGA created new cultural liaison positions for minority student groups, though they remain unfilled. Still, the body has had other glaring issues throughout the year. Former SGA presidential candidate Taylor Green outlined what she saw as a culture of racism and exclusion in the SGA, and the body rejected a proposal to appoint a diversity and inclusion vice president.

It also courted controversy with its most recent elections. The elections commission disqualified the YOU Ticket from the election for violating campaign rules before the governance board reversed the decision. It was later revealed that one of the members of the board that voted on the decision was affiliated with the YOU Ticket. Further, the election commission didn’t act after it discovered that MaryPIRG, a nonpartisan student lobbying group, shared 450 students’ phone numbers with two parties during the election. The SGA’s institutions displayed an alarming level of disorganization in these incidents; its infrastructure was ill-equipped to handle such issues.

The Residence Hall Association has introduced some important programs and directives. It passed a resolution for a competition that would reward dorms for reducing their water usage and is working on a GreenEdu program, which would be mandatory online sustainability training for incoming students. The RHA also reinstated its Diversity and Inclusion Action Committee and mandated training specifically for its diversity and inclusion vice presidents while ensuring that the committee’s faculty advisor is someone with a background in issues related to race and identity. The RHA doesn’t have much power, as it would need university approval to actually implement some of its initiatives, but it is well-intentioned and has put forth some beneficial initiatives this year.

Hadron Chaudhary, opinion editor, is a junior English and geology major. They can be reached at chauds@umd.edu.