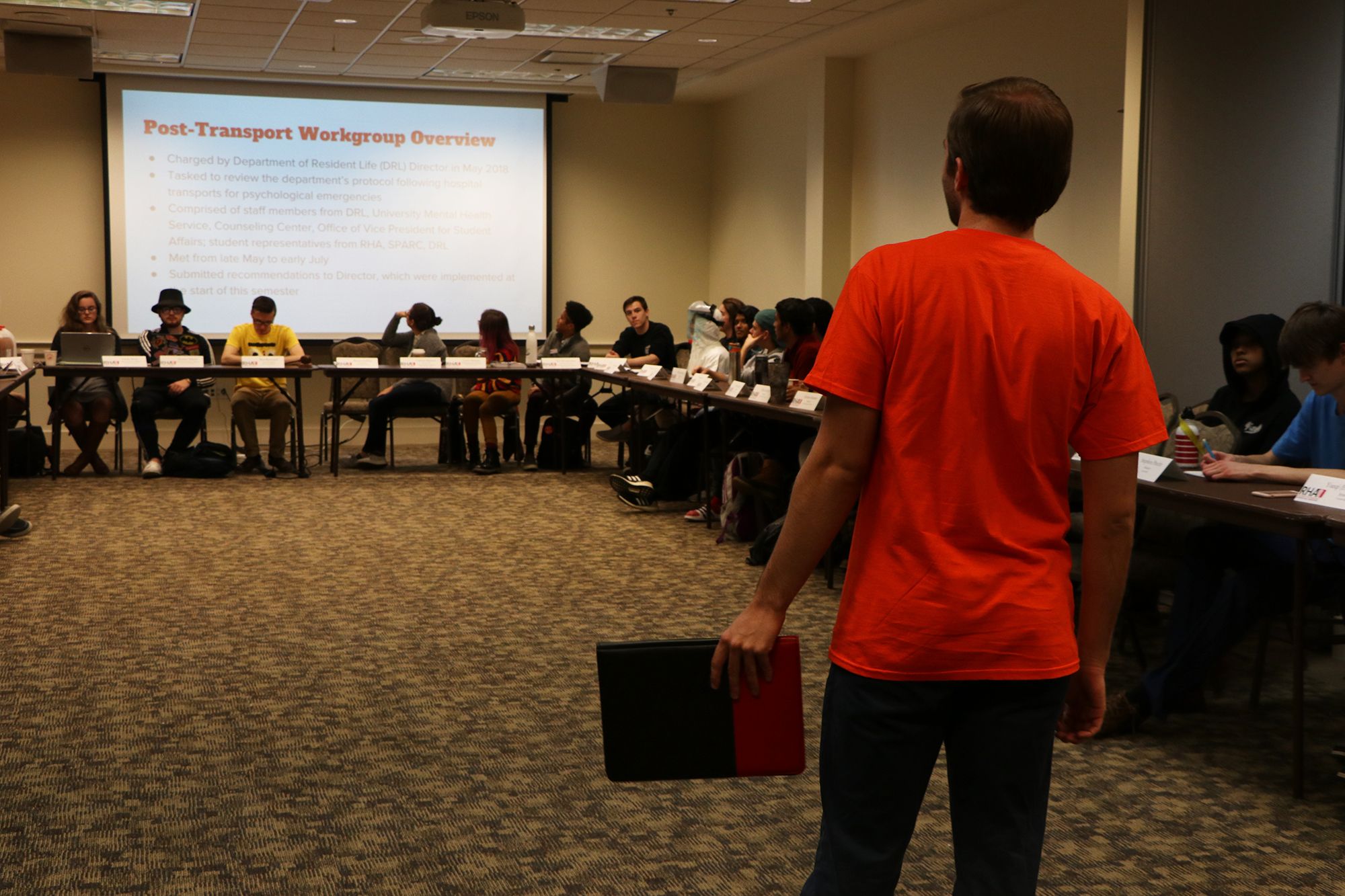 The RHA Executive Board at the RHA Meeting in Stamp Student Union. (Julia Nikhinson/The Diamondback)

Some University of Maryland students are working to create an online training program called GreenEdu that would teach incoming students about the university’s sustainability practices.

The Residence Hall Association sustainability committee is working on the program that will be similar to AlcoholEdu. The RHA is hopeful it will teach students more about waste sorting and composting, among other topics, said Lisa Alexander, Resident Life’s sustainability programs coordinator.The RHA is planning for the program to be mandatory, similar to the university’s online sexual consent and alcohol courses, Alexander said.

The program is still in its infancy, though, and there’s plenty left to be decided.

“We don’t know how things will be funded, we don’t know if anyone will allow them to do this, but this is a project they’re very invested in,” Alexander said.

“I know people who I would consider eco-conscious, but they still don’t know that pizza boxes can’t be recycled because of the grease,” she said.

The RHA modeled the new program after AlcoholEdu, which includes research-based interactive features. But details such as the number of interactive activities and the program’s length have yet to be fleshed out, said Calvin Burns, the sustainability committee’s chair.

Burns said he envisions the program as “an interactive online video service,” although the committee hasn’t hashed that out just yet.

The committee hopes to have the program ready by the start of the fall 2019 semester, Burns said, though many questions remain, including whether the committee can get a sustainability grant by the end of the semester, whether more students than just incoming freshmen should be required to take the course and whether someone who has previously worked with the university ought to design the program.

Burns, a cell biology and genetics and environmental science and technology major, said that he thinks GreenEdu could be completed in time for this university’s 2020 sustainability goal check-in. The check-in is part of the Climate Action Plan aiming to reduce the university’s carbon footprint by 50 percent.

While the RHA’s sustainability committee is “not too concerned with enforcement right now,” Burns said there has been talk about how they could threaten deducting students’ housing priority points to give completing the GreenEdu “some teeth” down the road.

Alexander said the idea for this program began during conversations that the former sustainability chair Dan Laffin started last year, and the committee “consistently talk[ed]” about how “people don’t know [components of sustainability], particularly around waste sorting.”

“Even people with their best intentions will see the signage in Stamp and not know how to do it,” Burns said.

“Having to come to college where you’re supposed to feel like an adult not taking classes you don’t want to take, being told to take a class in a thing that you’ve studied for years can feel a little repetitive and unnecessary,” Pereira said.

Still, Burns says that recycling is sometimes different in Maryland, which can be difficult even for people who grew up recycling.

“I thought I was a recycling expert, and then this summer I learned that if you’ve got a piece of plastic that’s smaller than 2 inches in any dimension, that’s a piece of trash,” he said.

Garrett Alexander is a freshman computer science major from Oklahoma, where he doesn’t see people recycle as much as they do here.

“I wish somebody would come by and put down some definitive rules of what to recycle and what not to recycle because I feel bad throwing [a Starbucks cup] away and I feel bad recycling it,” he said.

Pereira said that while GreenEdu would help “in terms of informing people the correct policies that UMD abides by,” making it required like the other two would be “unfortunate.”

“The very nature of it being a mandatory thing, compulsorily forcing people to do it, would make people tune out,” the freshman said.

Overall, Burns hopes that this program will “inspire the next generation of residents to live a more sustainable life in whatever way they can.”

“With more realistic, small-term goals, if we can get people to take shorter showers and recycle better, I would be happy,” Burns said. “Shooting for the stars, but I would be happy with the moon.”