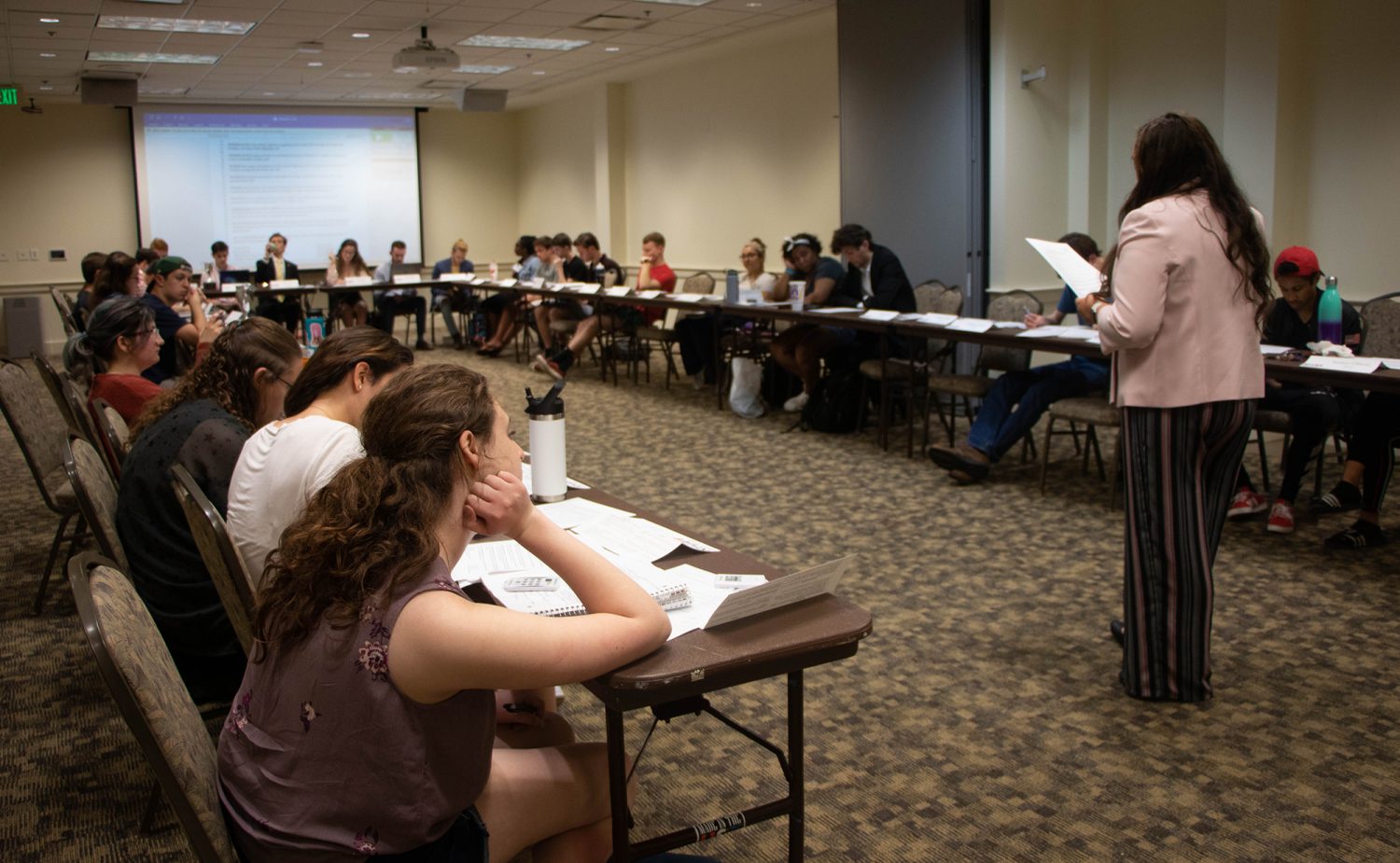 Lucie Roach presents a resolution that would allow residential facilities to implement an energy efficiency competition at the May 5, 2019 RHA meeting in the Stamp Student Union. (Julia Nikhinson/The Diamondback)

The University of Maryland RHA passed a resolution supporting an energy efficiency competition in student dorms during their Tuesday senate meeting at Stamp.

“What we wanted to do with the energy consumption competition is encourage residents to make more sustainable energy decisions by being more aware of their consumption,” said Lucie Roach, the Residence Hall Association’s Residential Facilities Advisory Board chair. “This is a really good way for us to take a step in the direction of becoming a more sustainable campus.”

The proposed “Energy Consumption Competition” — an effort from Residential Facilities and the Department of Resident Life — would reward dorms that lower their water usage to below their average consumption from the previous semester, according to Roach, who authored the resolution.

The resolution passed with 23-1 with no abstentions.

Energy consumption was the second-highest cost for the Department of Residential Facilities in the last fiscal year, including students’ water, steam and electricity use, according to the resolution.

The Residential Facilities Advisory Board previously came to the RHA’s Sustainability Committee with a proposal for the dorms to compete against each other.

Calvin Burns, an outgoing senator-at-large for the RHA, said the committee rejected the proposal because it would unfairly pit dorms against each other and did not take into account differing air-conditioning, populations and building structures.

“We like the idea for a competition to reduce water usage, because we’re all about sustainability and it’s a major issue on this campus. But there were logistical — and even ethical — issues of doing residence hall against residence hall,” Burns said. “Some residence halls, it’s just significantly easier to have lower water usage.”

Taking into account the committee’s criticism, the resolution included the revised proposal that the dorms will compete against themselves, according to Roach, a sophomore nursing student.

With these changes, Burns said the committee supports the resolution.

“Often, sustainable behavior is not something that gets immediate rewards to the individual. It’s more … we make the sacrifice so the world get better,” Burns said. “This is a way of recognizing and rewarding people who make that decision and take a five-minute shower.”

The rewards for dorms who lower water usage have not yet been determined by Residential Facilities. However, Roach said that the department is mainly considering using the money saved to update furniture or lounges in dorms that reduce their consumption.

“This would just be so students are being rewarded for reducing their consumption and that the money that they are saving goes directly back to them,” Roach said.

Although sustainable water usage is one of the goals listed on the Office of Sustainability’s website, there is no program specifically dedicated to reducing water usage in the dorms, Burns said.

The board will reevaluate the program in spring 2020 to decide whether to continue it, according to the resolution.

RHA vice president Julian Chiveral, who approved the resolution, said this program has a lot of potential.

“I think it’s a good opportunity for people to be more mindful about their water usage,” Chiveral said. “I don’t see how it could hurt.”