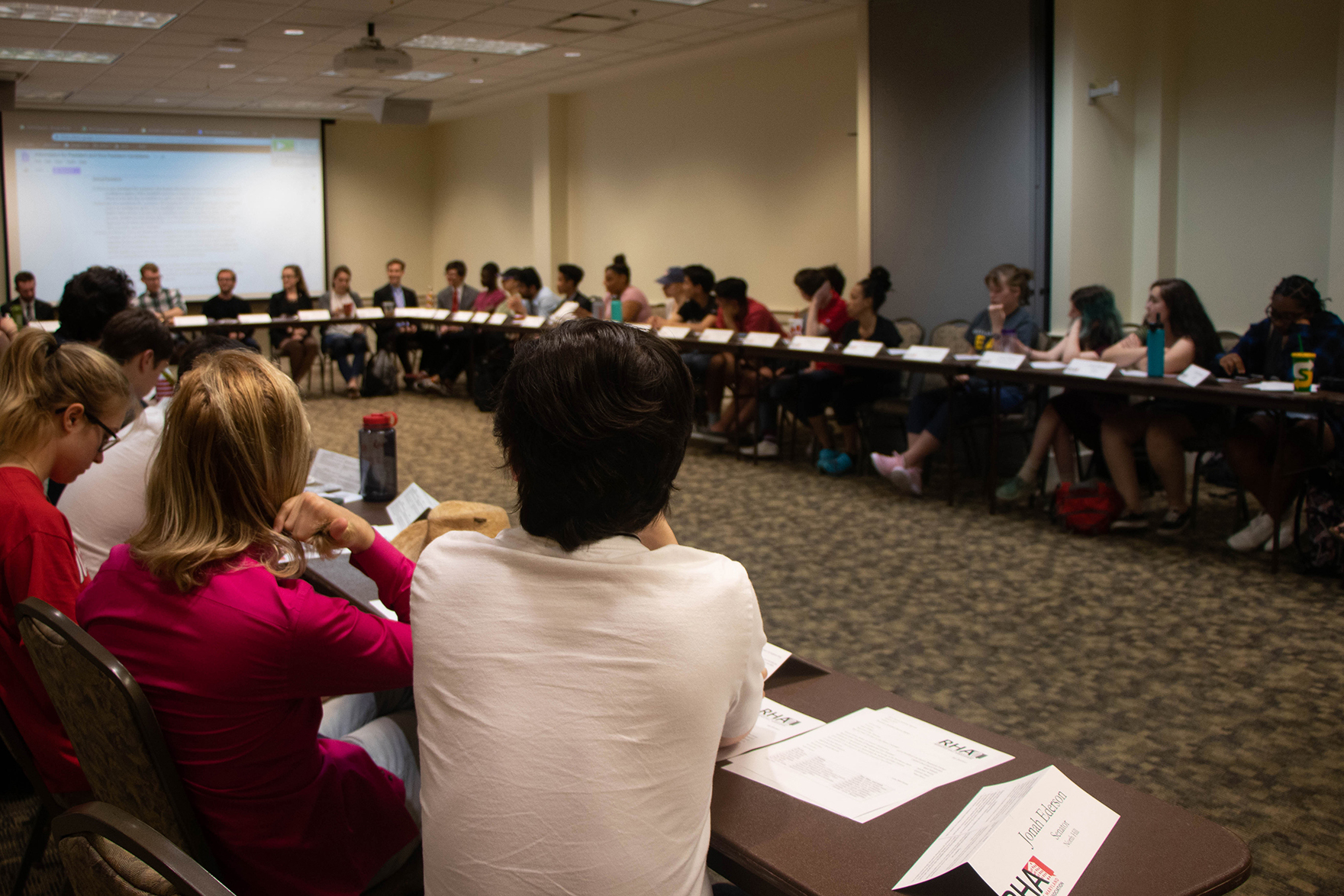 Residence Hall Association senators selected Emily Berry as their president and Julian Chiveral as their vice president for the 2019-20 academic year. Their terms start this semester, on April 30.

In the past three elections, both the president and vice president positions were uncontested, said Rick Mikulis, this year’s RHA Elections Chair. But this year’s field of candidates was more crowded.

“None of us have seen a competitive election,” said Mikulis, a senior government and politics major. “Tonight is the big event, the Super Bowl of RHA.”

Berry, a sophomore government and politics major, said she decided to run because she believed she could go “above and beyond” as president.

“I’m kind of in shock, but I’m very happy,” Berry said. “I’m very thankful that the senate has put this trust in me, and I will 100 percent do them proud.”

Laffin said though he would have liked to be selected, he is happy for Berry and will support her in her goals for RHA.

“I think she is going to be great as a leader. She has a great vision for the organization,” said Laffin, a junior economics and government and politics major. “I’d love to return to the organization in whatever capacity and work with her.”

[Read more: UMD RHA plans to restructure its executive board]

Current RHA president Bryan Gallion said he is excited to see what Berry does as president, adding he’s “indescribably proud” of Berry.

“She’s been such an incredible leader on this campus since she’s gotten here,” said Gallion, a senior journalism major. “I honestly think she’s one of the most genuine, hardworking dedicated leaders this campus has at the present moment, and the fact that she wants to dedicate herself to RHA is such a huge win for us.”

As president, Berry plans to better inform students of changes in student housing — such as more single dorms planned to come to Carroll, Caroline and Wicomico halls — and how students will be affected by these changes.

“We should be looking into [the changes] beforehand to make sure residents know, and we’re informing them, ‘Here is the next step, adjust your plans accordingly,’” Berry said.

Additionally, Berry said she wants to meet with the new SGA president to come up with a formal policy to have the student governing bodies collaborate more, with communication extending beyond the two presidents.

“It’s weird to me that we have residential representatives in [both RHA and SGA], and that they have no idea who each other are, really, and they don’t work on anything,” Berry said. “They would be way more powerful if they worked together and worked on seeing what issues are affecting their communities directly.”

After 22 reported hate bias incidents this academic year, Berry said she wants the RHA to provide more messaging to students about why these incidents are not acceptable. She supports the continuation of No Hate in Our Home, a Resident Life message campaign to discourage hate-related incidents in the dorms.

“While I don’t think we can do anything in the formal process of finding the perpetrator and getting them in trouble, we can be the person to proactively say this is not allowed,” Berry said. “With the No Hate in Our Home campaign, we can ensure that there’s posters literally everywhere, so that it’s normalized for people to think this is wrong.”

Sharing similar communication goals, Chiveral said he wants more students to understand what RHA does and how it can help students. He wants senators to engage in more outreach through floor group chats and online forums to get a sense of students’ opinions on potential policies.

“I want to help the senators next year and the returning senators to make sure they are getting the opinions from residents,” Chiveral said. “Everybody has their own personal opinion, but your personal opinion isn’t what matters — it’s what your residents care about.”

CORRECTION: Due to a reporting error, a previous version of this story misspelled Julian Chiveral’s name. This article has been updated.