“It’s hot as shit”: UMD students in dorms without AC have taken to sleeping in lounges 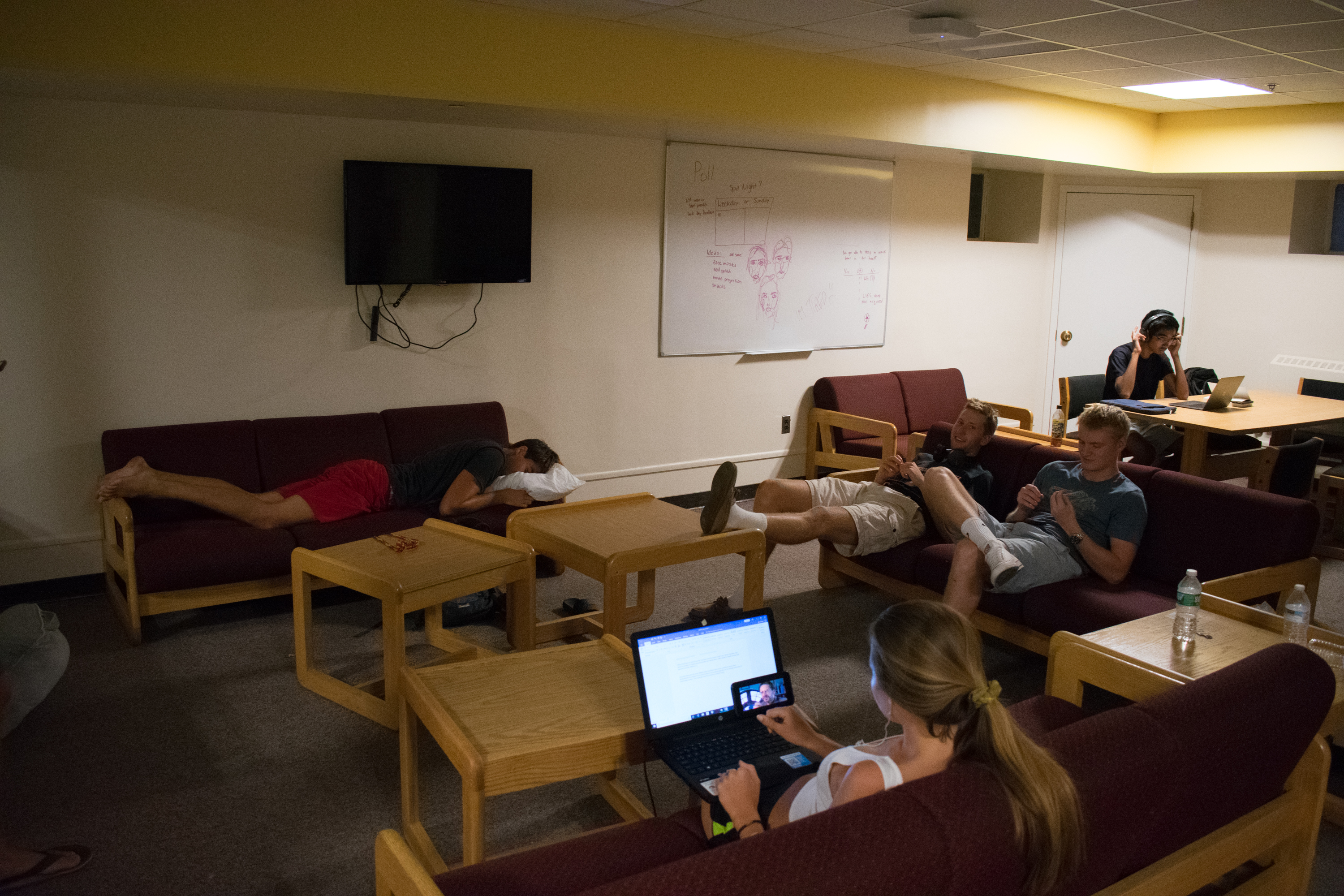 After shuffling through the first week of classes in 90-degree heat, some University of Maryland students returned home to the relief of air-conditioned dorms.

But those living in North Hill’s “historic district” had a different experience.

Students in Wicomico, Worcester, Carroll and Caroline halls received a heat advisory email from the Department of Resident Life warning of “higher than average temperatures and humidity,” then spent the week looking for ways to sleep comfortably.

Resident Life has attempted to combat the heat by distributing fans to students in dorms without air conditioning and opening up multipurpose and study rooms in a variety of buildings for students with valid identification. Prince Frederick Hall, for example, opened 24-hour access to its lounges and multipurpose room for students seeking refuge from the heat.

Rather than stay in his room in Wicomico Hall, Kyle Nichols, a freshman enrolled in letters and sciences, slept in the dorm’s air-conditioned lounge throughout the week, alongside a co-ed group of sweaty students.

[Read more: Some UMD students may have to live in dorm lounges again this year]

Resident Life spokesperson Tracy Kiras wrote in an email that the department is addressing the situation.

“Our professional community staff are working diligently to extend additional accommodations to students during this heat wave,” she wrote. “We understand students’ frustrations regarding the heat and humidity both in and outside the buildings.”

Freshman English major Jonah Lecker — who’s been sleeping in his room in Wicomico Hall with the help of three fans — said students without air conditioning face an “almost impossible” task in getting a good night’s rest.

“We feel like we’re at a disadvantage compared to the other students,” he said. “They’re probably more energized and ready in the morning than we are.”

On Sunday, Resident Life opened the multipurpose rooms in Annapolis Hall — which is not a dorm — and Denton Hall for students to sleep in from 11 p.m. to 8 a.m. The department also offered students a limited number of mattresses, available on a first-come, first-served basis, to soften the experience of sleeping in a lounge.

Sleeping in common areas raised questions of security, with a Resident Life email warning students to bring “your own bedding and keep your valuables and personal belongings locked in your residence hall room for safekeeping.”

Bridgette Hammett, a freshman environmental science and technology major, said she and her roommate were getting creative with ways to avoid the heat in their room in Wicomico Hall.

“It was 95 degrees in our dorm,” Hammett said. “We slept on towels on the floor in our bathing suits because we knew we were going to be sweating.”

A missive titled “A Hell Away From Home” was found last week in the Carroll Hall lobby, which has air conditioning, although the rest of the building does not. The one-page document, signed “Anonymous,” is written from the perspective of a Carroll Hall resident, who shares their experiences in the dorm and their frustration with Resident Life.

“You enter the [Carroll Hall] lobby, and sure it’s nice and cold for a brief moment,” the missive read. “But you make your way into the rest of the building, and the illusion of the cold fades into a heat-induced mirage. All that surrounds the resident is a blazing hellfire that sweats weight off of them.”

While dorms in the historic district received new lobby floor coverings, whiteboards, bathroom drain lines and fresh paint over the summer, nothing cooling-related was installed due to the limited electrical infrastructure of the buildings, according to a Resident Life email.

“It’s just unfortunate,” Lecker said. “We want to come back to our room, we want our room to be a place we can hang out, and it’s just not a comfortable place.”