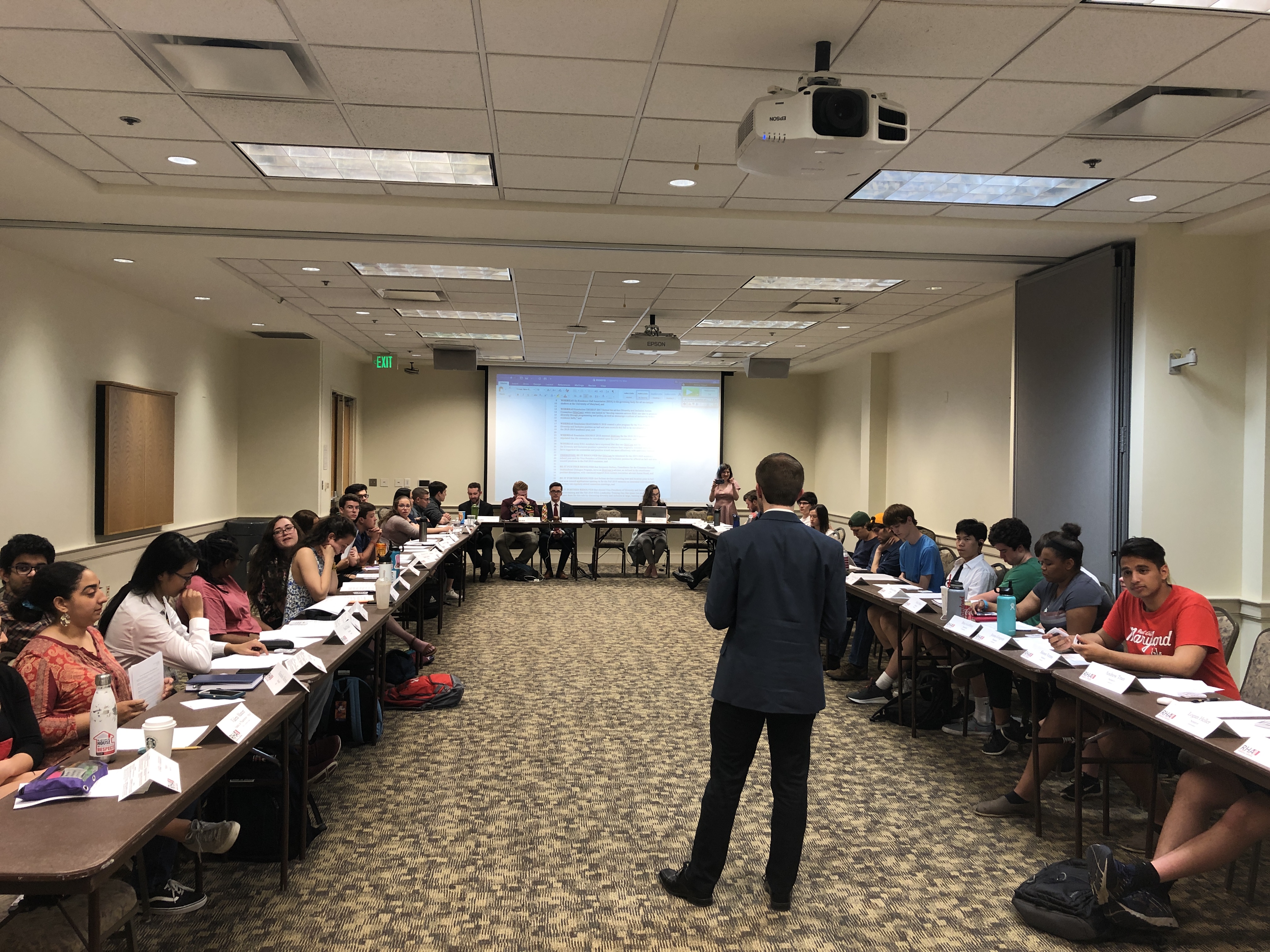 Bryan Gallion addresses the RHA Senate during its Tuesday meeting in the Benjamin Banneker Room in Stamp.

The University of Maryland’s RHA Senate voted Tuesday to reinstate its Diversity and Inclusion Action Committee for the second time since it was created.

The Diversity and Inclusion Action Committee — which includes the diversity and inclusion vice presidents from the 11 Residence Hall Association councils across the campus — has to be reestablished each year because it’s a temporary committee. It was first formed in fall 2017, months after 2nd Lt. Richard Collins, a black student visiting the campus from Bowie State University, was fatally stabbed while waiting for an Uber. Sean Urbanski, a white former student at this university, is now awaiting trial on murder and hate crime charges in Collins’ killing.

The measure passed 32-4 with no abstentions.

RHA president Bryan Gallion, one of a few RHA members who wrote the legislation that originally established the committee, added it was also formed in response to hate bias incidents on the campus. There have been 22 this academic year, with 12 taking place in student residences, according to the Office of Diversity and Inclusion’s hate bias report log.

“We were in the wake of Lt. Collins’ [killing] and a lot of marginalized groups felt uneasy on campus and going to school here,” said Gallion. “This committee was the RHA’s executive board’s way of taking time to look into ways to address the campus climate at the time.”

The committee — which recommends policies and initiatives to promote diversity and inclusion on the campus — still isn’t a permanent fixture on the RHA, but Gallion said it could become a standing committee if all goes well next year.

The resolution passed Tuesday appoints Benjamin Beltran as the committee’s new adviser. As coordinator for the Common Ground Multicultural Dialogue Program — a peer discussion group in the Department of Resident Life — Beltran has more experience working with diversity and inclusion issues than the committee’s current adviser, who works as the department’s coordinator for student leadership development.

Dan Laffin, a senator-at-large for RHA who was also involved in writing the committee’s original legislation, said that he is confident the new adviser will make it more effective.

“[The committee is] going to finally take form as what our vision for it really was, which is this biweekly meeting with an actual staff member who is committed to diversity in the position description,” Laffin said.

Beltran will designate a standard meeting time and location for the committee before applications for positions in hall and area councils open next fall, according to the resolution. Now, the committee doesn’t have a consistent meeting schedule, and RHA vice president Ben Reichard said the group has run into issues with meeting attendance.

“We struggled to find a time where everyone could attend,” Reichard said. “We weren’t really able to bring it home, so to speak, and really made those program ideas and programming resources available.”

“The hope is that with more guidance and training, the vice president of diversity and inclusion will be able to host more events within the residence halls in areas that celebrate different identities and foster conversations about the climate,” Gallion said. “We also hope that they will be able to work on inclusion efforts within our community through policy initiatives.”