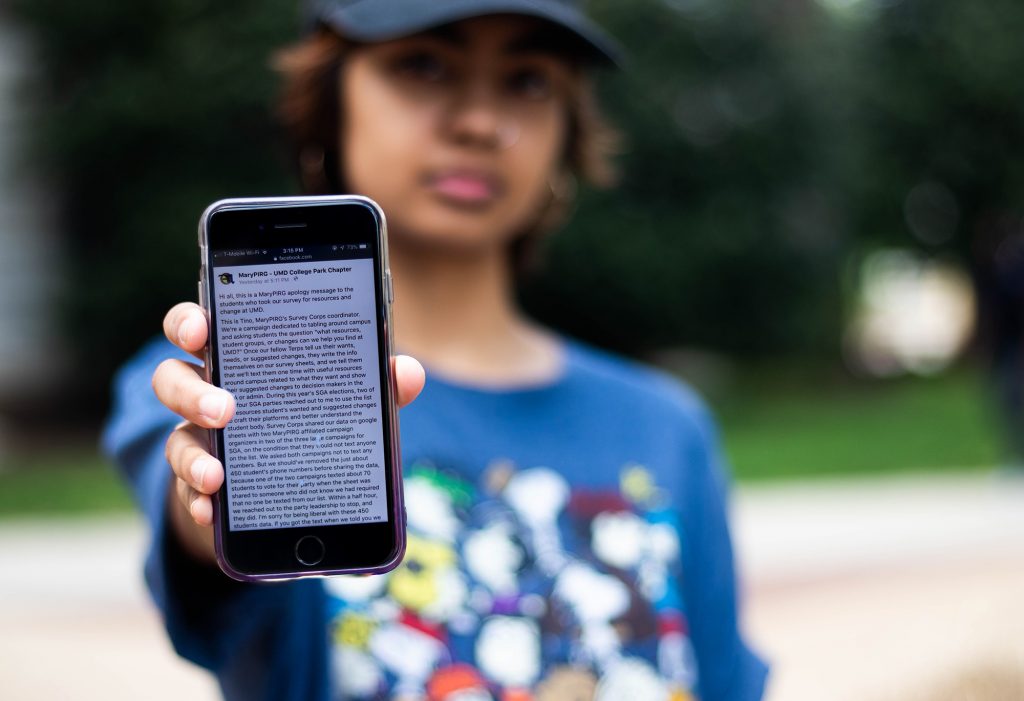 The University of Maryland’s MaryPIRG said Saturday it leaked more than 400 students’ phone numbers to two parties running in the SGA elections — but the legislature doesn’t intend to take any action as a result.

MaryPIRG, a nonprofit student lobbying group that bills itself as nonpartisan, sent Empower Maryland and Unite UMD a spreadsheet of information it collected through its Survey Corps campaign. The initiative aims to compile students’ concerns and ideas about ways to improve the campus, said Tino Fragale, the group’s president.

In addition to a litany of students’ names and concerns, the sheet listed 450 phone numbers — something Fragale said he didn’t realize before he sent it.

“It was always a dream of mine for the SGA to craft their platform to understand what students wanted, based on their comments,” said Fragale, a senior independent studies major. “I did not intend for any campaign to have the phone data.”

The Empower Maryland ticket — which won the presidency by a wide margin and secured all but three legislative seats in the Student Government Association elections Wednesday — texted about 70 of the 450 numbers Monday and Tuesday asking for votes before a student took note of the leak.

Fragale said he told Empower Maryland to stop using the numbers when he realized what was happening.

Sabah Rana, a sophomore who ran and lost as an architecture school representative on the Unite ticket, received two text messages from an Empower Maryland ticket member. Rana reported the breach to the SGA’s election commission Tuesday night.

“I feel like it’s really deceitful to be taking numbers from an organization that’s told everyone they’re gonna be nonpartisan,” the architecture and art history major said. “It’s such a violation of privacy.”

But Nancy Jin, chairwoman of the SGA’s three-person elections commission, said the commission chose not to take any action after investigating the claim.

“There wasn’t a specific election rule that was violated, so it’s not really under our purview,” said Jin, a senior government and politics major. “These election rules are kind of vague, so maybe the people who are editing and revising the rules for next year may want to take it into consideration.”

MaryPIRG, which did not endorse a party in the elections, is funded through the Student Activities Fee, a fund the SGA apportions.

Kislay Parashar, a member of both Empower Maryland and the MaryPIRG Survey Corps, said the party reached out to Fragale about the spreadsheet in hopes it would help them design their platform. The phone numbers accidentally got mixed in with Empower Maryland’s other contact data, he said.

“We made our platform pretty much last-minute, a day or two before [campaigning] started,” said Parashar, a freshman computer engineering major. “The fault lies with us … We never thought these numbers would be mistaken for our canvassing data.”

Empower Maryland focused their campaign on improving transparency and student involvement within the SGA. They were challenged by three parties — one of which was Unite, headed by former SGA diversity and inclusion director Taylor Green.

The week before the elections, Green shared a letter on Twitter explaining her decision to resign from the legislature. She said she witnessed a pattern of racist, sexist, ableist and transphobic behavior from the body that inhibited her ability to do her job.

Green — who came in third in the race for president, behind Empower Maryland’s Ireland Lesley and YOU Ticket’s Andrew String — told The Diamondback she would have liked the elections commission to do something as a result of the breach.

“I guess because elections were already happening and voting had already started, that the commission wasn’t able to investigate properly or look into it as thoroughly,” she said. “I think I was assuming maybe some form of action would be taken.”

Though Unite also reached out to Fragale for a summary of Survey Corps’ findings, the party didn’t expect to receive phone numbers and didn’t use any of the ones it did, said Ayesha Amsa, the party’s campaign manager.

“I didn’t think it was a huge deal,” said Amsa, a sophomore public policy major. “It’s just another [SGA] scandal that happened this year.”