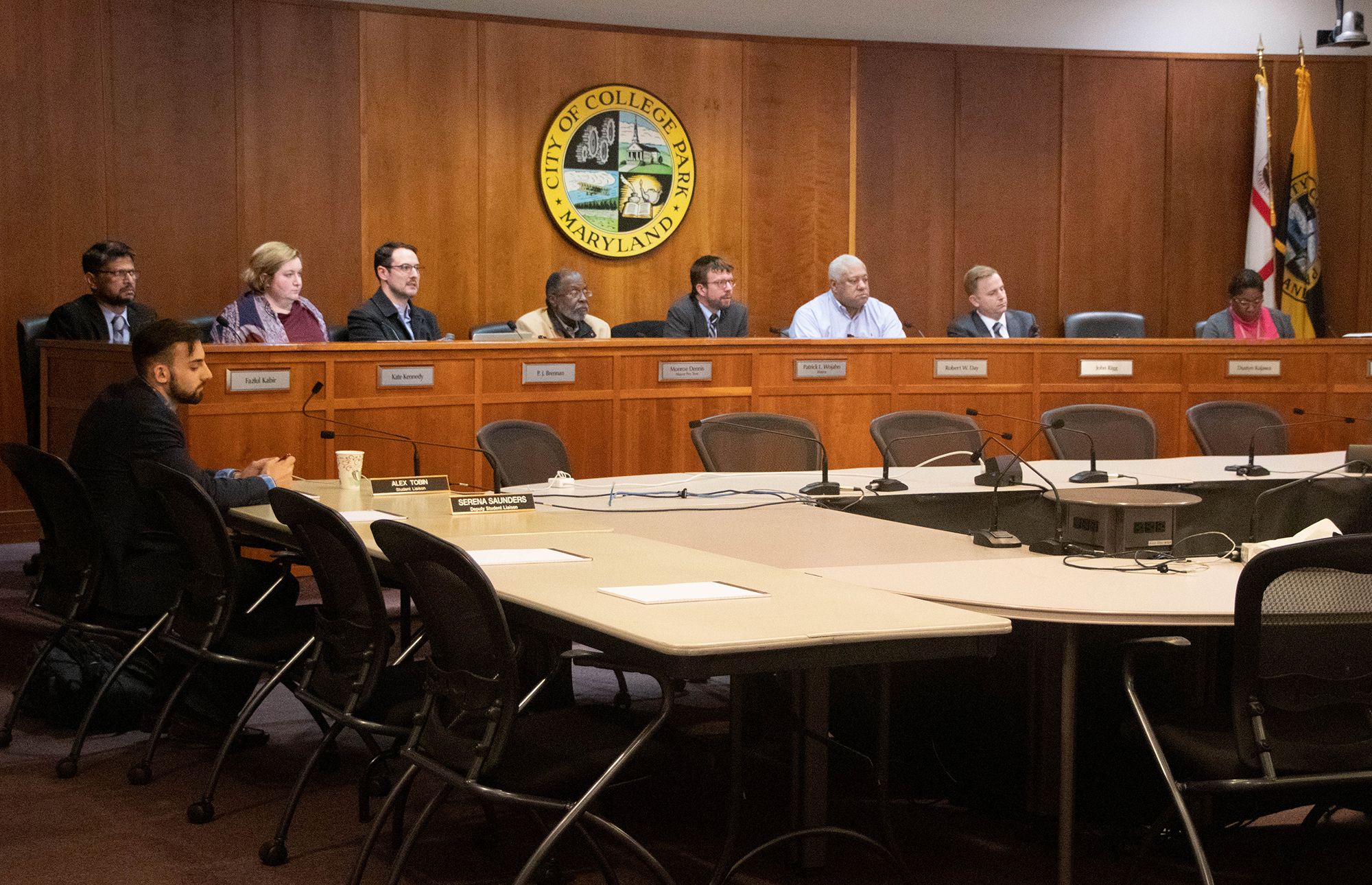 The College Park City Council at its meeting on Jan. 29, 2019. (Julia Nikhinson/The Diamondback)

After about an hour of resident and council input on historic preservation, the council’s motion to move forward with the project’s site plan passed 7-0, with District 4 Councilwoman Dustyn Kujawa not in attendance.

The plan — an agreement between the city, the University of Maryland, the state’s Housing and Community Development Department and the Maryland Historic Trust — will require the university to take steps to preserve historic windows, doors and brick in the two-story structure, in addition to the construction of a new play area.

“The city and state parties are very interested in seeing the original historic building preserved as much as possible,” said Terry Schum, the city’s planning director.

The childcare center project, which has been the subject of years of heated debate, will fill a need in an area without many childcare options. It’s expected to cost about $6.9 million and provide 14 of its 120 seats to College Park residents who are not university employees.

District 3 Councilman John Rigg also voiced the importance of the project continuing as soon as possible. He said the 1950s and 1960s-era additions on the back of the structure are “fine examples of mid-century architecture,” but not valuable enough to risk endangering the project.

Plans for the destruction of the 80-year-old school located at 4601 Calvert Road began in September, when the university presented plans for the childcare center at a public hearing, during which community members expressed concerns over its design and the split of benefits between the city and university.

Dave Dorsch, a 45-year College Park resident, expressed outrage toward the council’s decision and the plans to tear down a majority of the structure and replace it with inconsistent architecture.

“The whole place told [the university] we don’t like it,” said Dorsch, who lives in District 3. “We told them, ‘We don’t want you to tear down the original building, and we think the proposal looks like hell.’”

Dorsch said the new architecture doesn’t blend in with the old facade and will look out of place, raising his voice when he spoke against the university for not listening to residents’ concerns.

“I’m really surprised that in this council, nobody stepped up and said, ‘Our citizens don’t want this — how come we’re moving ahead with this?’” Dorsch said.

Stuart Adams, the Calvert Hills Citizens Association president, called on the council to ask the university to incorporate salvaged material, such as bricks, into the new building to make it look similar to nearby buildings and the old structure.

“There’s a need immediately in this neighborhood, in this community, in this city, and we don’t want to delay this any further,” Adams said at the end of public comment. “But we do want to make sure it’s done right.”