“A slap in the face”: UMD Senate reacts to Wallace Loh’s postponed retirement 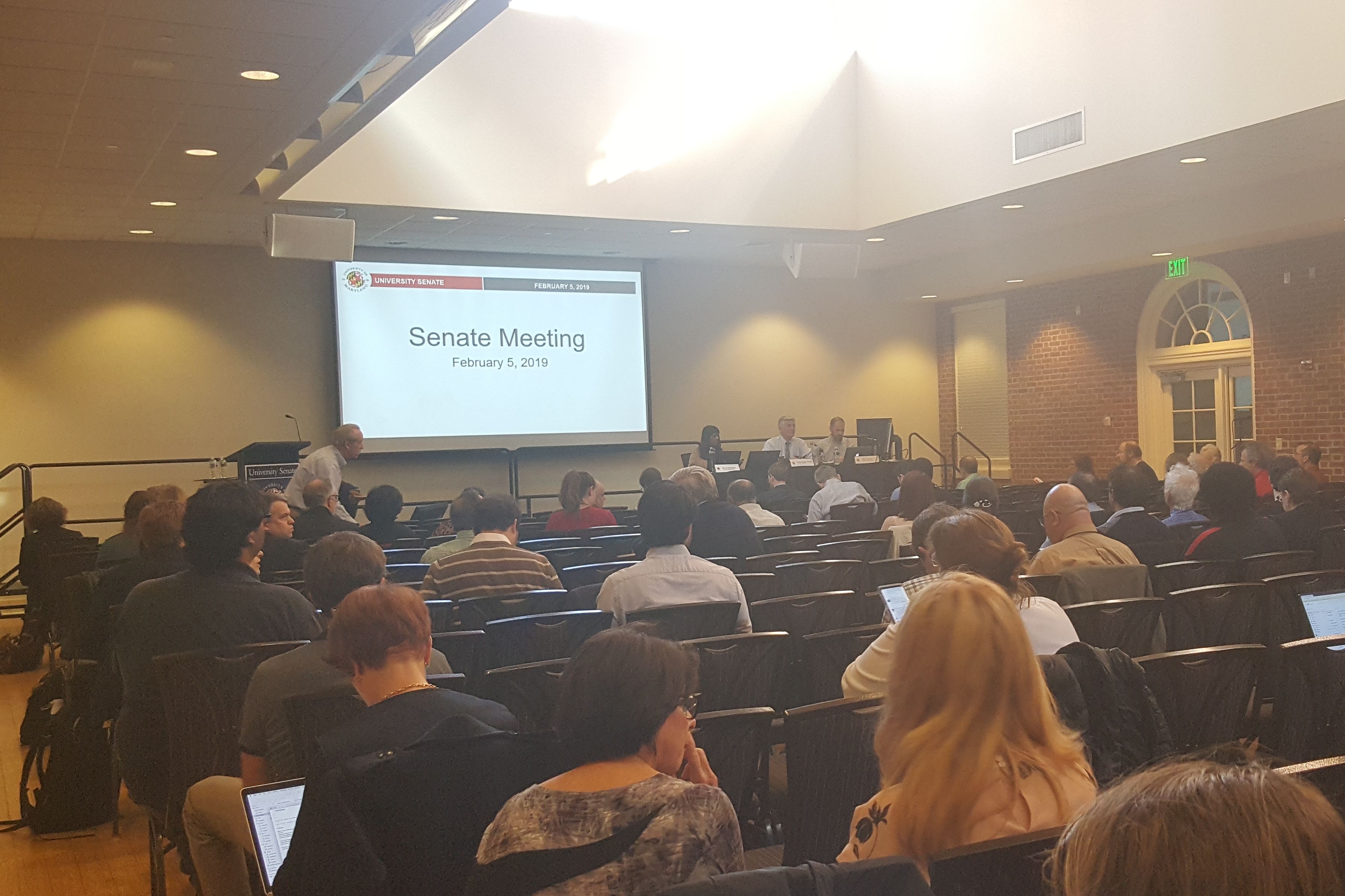 University of Maryland Senator Harry Huntley said the extension of Wallace Loh’s presidency after he announced his plans to retire was “a slap in the face.”

Huntley was one of several senators voicing their opposition to the move during a heated discussion at Tuesday’s University Senate meeting. Loh’s continued tenure went against the body’s affirmation in November that he should retire in June 2019 as planned.

“He didn’t honor what we suggested, when we are the policy-making, most representative body of the university,” said Huntley, a junior agricultural science and technology and economics major.

At a press conference in October, Loh announced his decision to retire at the end of the academic year, following controversial staffing recommendations from the University System of Maryland Board of Regents. But last week, Loh surprised the campus community with the announcement that he’ll delay his retirement until 2020.

“Basically, the campus was lied to,” said Tom Cohen, a physics professor and chair of the senate’s Academic Procedures and Standards Committee.

Senators said they’re tired of their voices not being heard — so to remedy that, the body voted to designate the senate’s chair as its point representative in the president’s cabinet.

The move’s supporters argued that adding the role to the eight-year president’s inner circle could enable them to have a more direct say in his decisions.

Daniel Lathrop, a physics professor, said he could understand his fellow senators’ frustration, adding they can feel “disenfranchised” when they vote on “things that seem to have no effect on the process.”

“It comes out of frustration of the senate seeming irrelevant,” he said.

Cohen proposed the resolution in what he said was an effort to include faculty, students and staff more in administrative decisions. The move is “as much symbolic as practical,” in that it’s meant to voice the senate’s lack of faith in the current leadership, he said.

But senate chair-elect Pam Lanford — the person who would hold the role next year if the resolution is acknowledged by the president — said she did not think the measure was feasible, and added that future presidents would be bound by it if it were adopted as practice.

Loh has the power to consider or ignore the measure, since it’s a resolution and as such doesn’t require the formal approval a bill does. Even so, it carries high stakes for some senators.

“If he turns it down, it will show he is isolated, insular, insensitive and unworthy of being our president,” Cohen said.

Lanford views the senate leadership’s recent interactions with administration optimistically, noting that their meetings have been more “substantive” than they have been previously. The Senate Executive Committee meets monthly with the president and can schedule additional meetings as needed, Lanford said.

And the university has had crisis. After football player Jordan McNair’s death in June, an outside firm investigated the timeline leading up to the event and found trainers were responsible for not diagnosing and treating him properly. A separate report on the school’s football program found the university administration did not provide proper oversight for it, which allowed abuse to occur.

In November, the senate also called for a more representative presidential search committee to amp up university input in the process — but it wasn’t until this Tuesday that Chancellor Robert Caret sent the body a letter promising to appoint one of the academic deans as vice chair to Regent Gary Attman.

Lathrop was pleased after reading the chancellor’s letter.

“It is a positive step and gives me optimism in a search outcome that will align with the core mission of the university,” he said.

But not everyone is convinced.

Though Huntley was “heartened” by the chancellor’s letter, he said it didn’t fully back the senate’s request to match the proportion of faculty, staff and student members on the search committee with that of the senate.

“This speaks to a really failed state of shared governance on our campus,” he said.