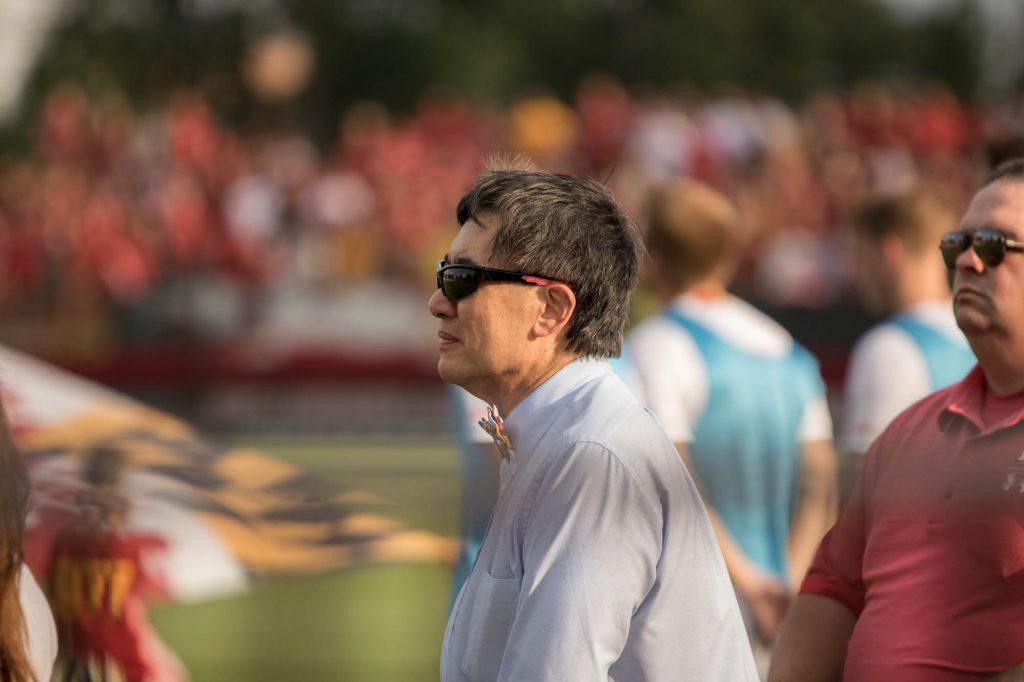 University President Wallace Loh looks on during the moment of silence for Jordan McNair prior to Maryland men’s soccer’s 0-0 draw against No. 10 Stanford at Ludwig Field on Aug. 31, 2018. (Richard Moglen/The Diamondback)

Following reports of a “toxic” culture in the University of Maryland’s football program, president Wallace Loh touted how the university quickly created an independent commission to investigate. Yet this week, that commission found university leadership partially responsible for athletic department turmoil.

The commission — which conducted 165 interviews in an investigation spanning over 1,000 hours of work — found that the athletic department lacked accountability and oversight, and university leadership contributed to the department’s “ongoing dysfunction.”

According to the report, the athletic department under former director Kevin Anderson suffered from “high leadership turnover rates, dissension, and internal rivalries.” The president’s office stepped in during 2016 and orchestrated Anderson’s removal.

Anderson’s drawn-out departure — having a six-month sabbatical before he resigned in April — worsened the department’s turmoil, the report said. Anderson met with Loh regularly, but never had a strong relationship with him, which only declined when eight sports were cut amid budget constraints in 2011.

And the relationship grew even more strained when Anderson believed then-deputy athletic director Damon Evans was trying to usurp his authority, and take his job by going over his head and meeting with Loh to discuss athletics matters. Both Loh and Evans denied these meetings took place.

In August, The Diamondback reported that Anderson authorized $15,000 of athletic department-controlled funds to legally represent two football players accused of sexual misconduct in 2017.

The use of the money was “questionable at best,” and protocol was not followed in the players’ representation, the report said.

For Loh, Anderson’s lack of adherence to protocol was “the last straw,” according to the report.

In October 2017, Anderson agreed to resign after a six-month sabbatical, which would begin that month. The sabbatical was planned both to avoid suspicions the decision was related to a nationwide college basketball bribery scandal, and to allow Anderson to apply to other athletic director positions.

“Dr. Loh candidly states that, in retrospect, he wished he had moved sooner to change leadership,” the report said. “This period of uncertainty further exacerbated ongoing turmoil in the Athletics Department.”

Loh, viewing the situation as irreparable, knew Anderson would not return.

But others in the department did not. The move “created a lack of leadership and an atmosphere of uncertainty” for the next six months, the report said. The national search for a new athletic director, which was announced in April, concluded in July when Loh officially tapped Evans for the job.

The lack of cohesion in Loh and Anderson’s relationship showed in late 2016. The president — as well as Anderson and others — received an email Dec. 9, 2016 alleging head football coach DJ Durkin and his staff mistreated athletes by exceeding practice time limits and and having players sign false documentation.

“DURKIN SHOULD BE PUT ON NOTICE! Immediately.” the email concluded.

One of the two staff employees who monitors Loh’s public email account forwarded it to Loh, and he directed the email be sent to Anderson on “an FYI basis.”

But before The Washington Post reported on the email Sept. 30, the committee interviewed Loh and his chief of staff, Michele Eastman, who both said they did not receive football-related complaints under Durkin’s coaching. When re-interviewed, they still did not recall it, but agreed the paper trail proved they did receive it.

In accordance with his typical protocol, Loh said he sent the email to the appropriate official: Anderson. He expected him to review the matter and take whatever action was necessary.

Anderson sent the email to athletic staff Damon Evans, Marcus Wilson and Zack Bolno, and each said they had not witnessed anything inappropriate.

The message continued to be bumped from one official to another, including to the athletics department and NCAA compliance staff. Compliance staff did not take any action regarding the email, other than making their supervisor aware of it, they said.

“In sum, it does not appear that the Athletics Department took any action of consequence to investigate this email. This is problematic at many levels,” the report said. “The email alleged violations of NCAA rules and serious misconduct that violated the University’s core principles.”

Additionally, Durkin “was never questioned or even made aware of this email,” which was “a serious omission,” the report stated.

The University System of Maryland Board of Regents holds the ability to hire and fire university presidents, but the report makes no personnel recommendations.

After members of the campus community — including attendees at a Black Faculty and Staff Association meeting and students on social media — called for the president’s resignation in the summer and early months of the academic year, Loh said that the calls stemmed from concern about the safety and well-being of student athletes.