“They don’t care”: UMD GSG says university, USM have been ignoring them 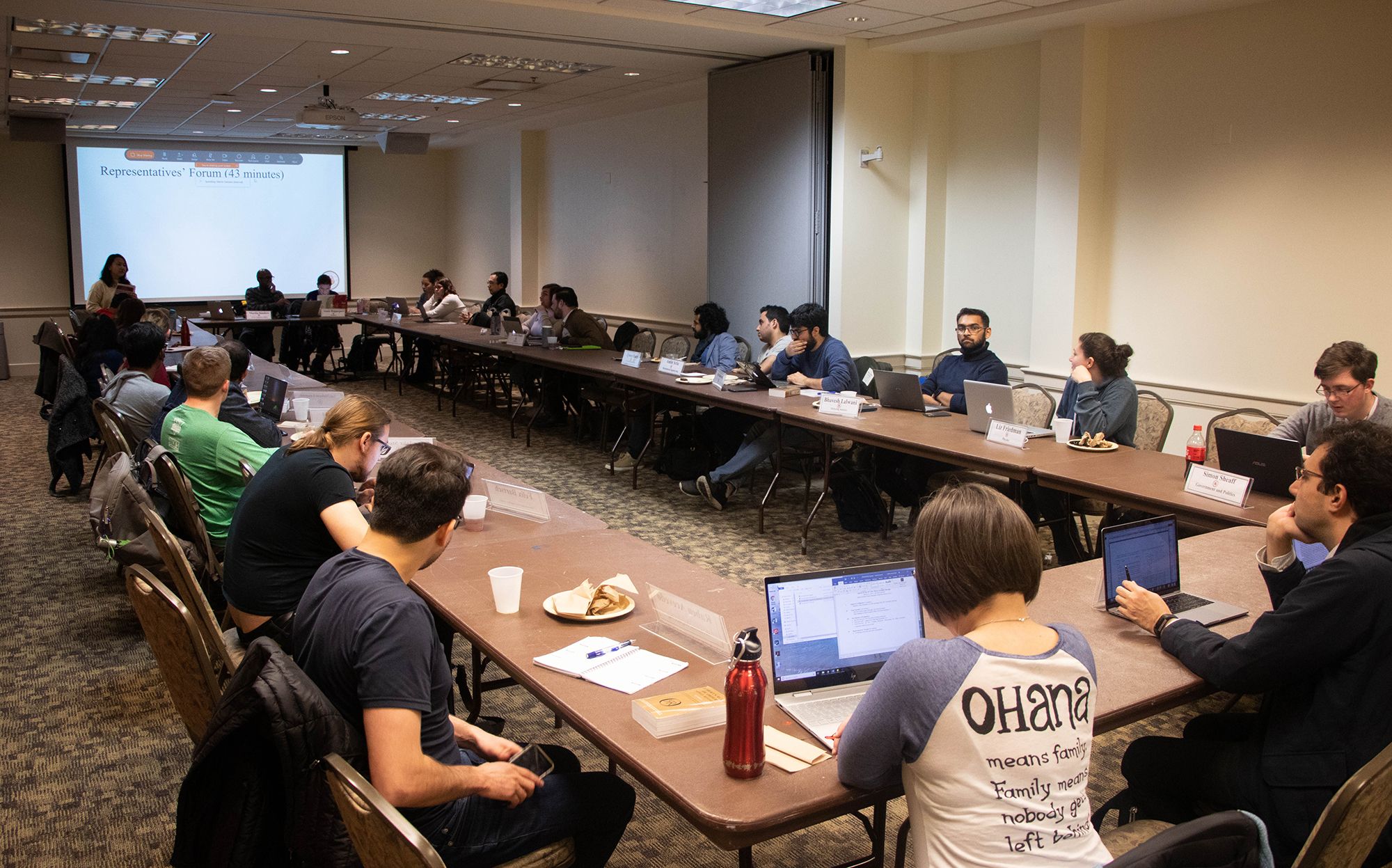 The Graduate Student Government meeting on 3.11.19. in the Benjamin Banneker room in Stamp (Julia Nikhinson/The Diamondback)

Members of the University of Maryland’s GSG spoke out against this university’s administration and the University System of Maryland during its Monday meeting, saying leaders disregarded their resolutions and left them feeling ignored.

Most notably, the group expressed frustration that the system did not act on its call for university President Wallace Loh to honor his promise to retire at the end of this academic year.

Though the Graduate Student Government voted in November to call for Loh to follow through on his word, he announced two months later he’d be returning as the president for the 2019-20 school year, instead planning to retire in June 2020 after the Board of Regents’ decided to retain him.

In November, the group also passed resolutions calling for graduate students to have a say in the hiring of this university’s president and the appointments for the system’s Board of Regents as well as the chance to opt out of the portion of the mandatory student fee that funds student tickets.

That same month, the USM student council agreed that students should have more of a say in the search process for university presidents, system spokesperson Mike Lurie wrote in an email. This resolution was passed to a council of the university system presidents, which agreed, Lurie added. Next, the resolution will be forwarded to the system’s Board of Regents.

But the GSG feels like their other resolutions have been ignored.

After the November special assembly meeting, GSG President Annie Rappeport said she brought these resolutions to this university’s president’s and the system’s chancellor’s offices’ attentions. She even tried to discuss the resolution that called for Loh to commit to his retirement at a Provost’s Student Advisory Council meeting, which advises Provost Mary Ann Rankin on issues concerning academic policy, she added.

“We all go in wanting to work with folks, and I think we’re a bit puzzled as to the lack of information sharing,” Rappeport said.

Lurie wrote that the governor appoints the Board of Regents — a system that will not change — but that students would have “significant input” in the appointment of the student regent through the USMSC. Furthermore, he wrote that students continue to be consulted about student fees. The USMSC voted Sunday to establish a new committee for the review of these fees, GSG government affairs vice president Rachel Lamb said.

University spokesperson Katie Lawson wrote in an email that resolutions passed by the Student Government Association and the GSG are “non-binding expressions of opinion” that are considered by university leadership.

“They are acted upon when taking into account the needs and priorities of the university overall,” Lawson wrote.

Rappeport suggested that Amin write up a resolution for next assembly meeting, articulating the body’s concerns. But while communication representative Katie Brown acknowledged the importance of resolutions, she said more is needed to make university and system leaders pay attention, such as reaching out to legislators and media outlets.

The GSG — and students throughout the university — need to organize and “[kick] up some dirt,” she said. Brown pointed out that the University Senate also passed a resolution calling for Loh to commit to his retirement. When he reversed course, Brown said there should’ve been mass protests and sit-ins on the campus.

Anthropology department representative Valerie Hall encouraged GSG members to engage with state lawmakers to push for action on issues they care about.

“This is a really key moment in terms of our state legislature because they’re upset too about how the Board of Regents has been handling things,” she said.

On Feb. 28, a bill that would ramp up transparency in the Board of Regents, including requiring its meetings to be livestreamed and for votes related to firing university presidents to be made in open sessions, passed the state House unanimously.

The measure follows controversy during this academic year for the regents’ handling of Loh’s retention and the presidential search process for this university. The board, which determines policy for the system’s 12 member institutions, came under fire for not updating the public about its progress on the search before announcing that Loh would remain in his role.

Even so, legislative affairs vice president Martin Sanders told the GSG not to expect instant results.

“Sometimes it takes the multiple resolutions coupled with the action. . . to get your point across,” he said.