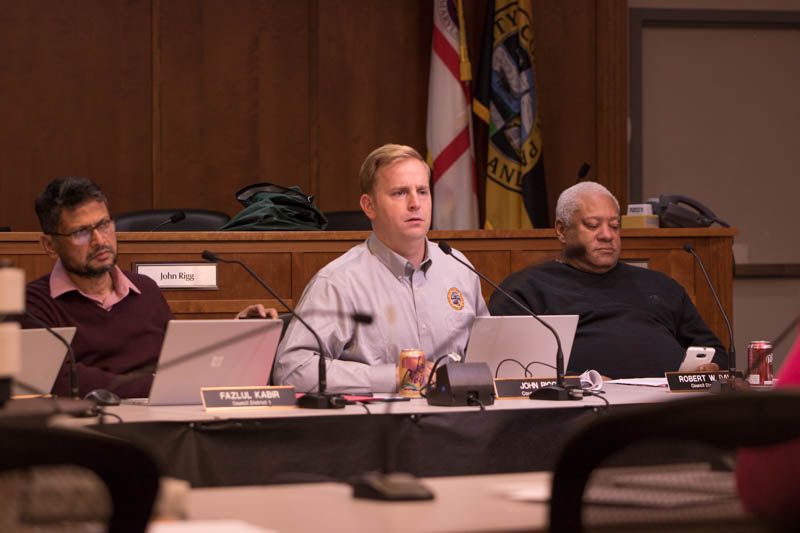 The new Maryland Hillel center inched closer to realization Tuesday, with the presentation of its detailed site plan to the College Park City Council.

The new two-story building, which is planned for what is now a parking lot behind the Landmark apartment building, has a contemporary design, with a red brick and glass exterior. More than double the size of the current center, the new Hillel would feature a large dining area, small cafe, multipurpose rooms and flex spaces, administrative offices and a student lounge.

Allison Buchman, director of operations for Maryland Hillel, said they hope to break ground next summer.

But it has a long way to go.

The council will vote next week on whether to recommend the site plan’s passage at the city level. However, the city doesn’t have the power to approve the project — that decision is made by the Prince George’s County Planning Board, which is scheduled to hold a hearing on Nov. 29.

City staff recommended the council support the plan, provided that some conditions are met.

Miriam Bader, the city’s senior planner, recommended that the Hillel center provide at least two pedestrian lights and at least two small-size maturing trees on Yale Avenue. The trees would replace eight mature trees that will be knocked down during construction, according to the city’s meeting agenda.

Bader also recommended that the Hillel agree to provide maintenance on the public street lights, landscaping, and sidewalks on Yale Avenue.

An attorney for Hillel, Lawrence Taub, said that the center should not be responsible for maintenance on the lighting — the city should.

“We don’t agree with that and we would ask that not be imposed,” Taub said.

Suellen Ferguson, an attorney for the city, said the city has “for years” asked developers to handle maintenance on things like light fixtures, landscaping and sidewalks.

District 3 council member John Rigg said the council needs to carefully consider what they ask from future developers in the city.

“I think this is a place in which we, as a city, need to think sort of precedentially about things, as we continue to experience development pressure,” Rigg said.

City officials also expressed concern about the lack of street lights for the 15 parking spaces that will be located off-site on university property.

Nine of the parking spots will come from Lot K5, and the other six from lots J2 and K1.The city’s director of planning, Terry Schum, said city staff has calculated the parking area should have at least 13 pedestrian lights.

Ed Maginnis, assistant vice president for real estate at this university, said the university is currently working on a lease for the parking spaces, but assured the city the location will be well-lit and safe.

“The lease is not going to use the word ‘gloomy,’ ‘dim,’ or ‘spooky.’ It is going to require that the conditions at that location be safe,” Maginnis said. “I don’t know whether that means two streetlights or 35 streetlights. The university will look at that and the university will apply its lighting standards.”

The 15 off-site spaces located at this university are fewer than the 49 on-site required by Prince George’s County zoning regulations.

Jonathan Allen, SGA president and member of the Hillel Student Board of Directors, said he has been a part of the Hillel community since his freshman year. On Tuesday, Allen said city staff has made parking “a bigger thing than it needed to be.” He said most students will opt for more sustainable methods of transportation, such as walking or riding Shuttle UM.

The new center is proposed to be 38,728 square feet, more than twice the size of the current site’s 16,930 square feet. It will be located at 7505 Yale Avenue, the former site of Hillel and the University Police headquarters.

The Maryland Hillel serves 6,500 Jewish students at this university, according to Hillel’s website, one of the largest Jewish student populations in the country. Allen said the new location in Old Town will attract more people to the community, both Jewish students and other residents.

“Maryland Hillel is also more than just a building,” Allen said. “But having that newer facility will provide them with the space and capacity to do even greater than they’re already doing.”