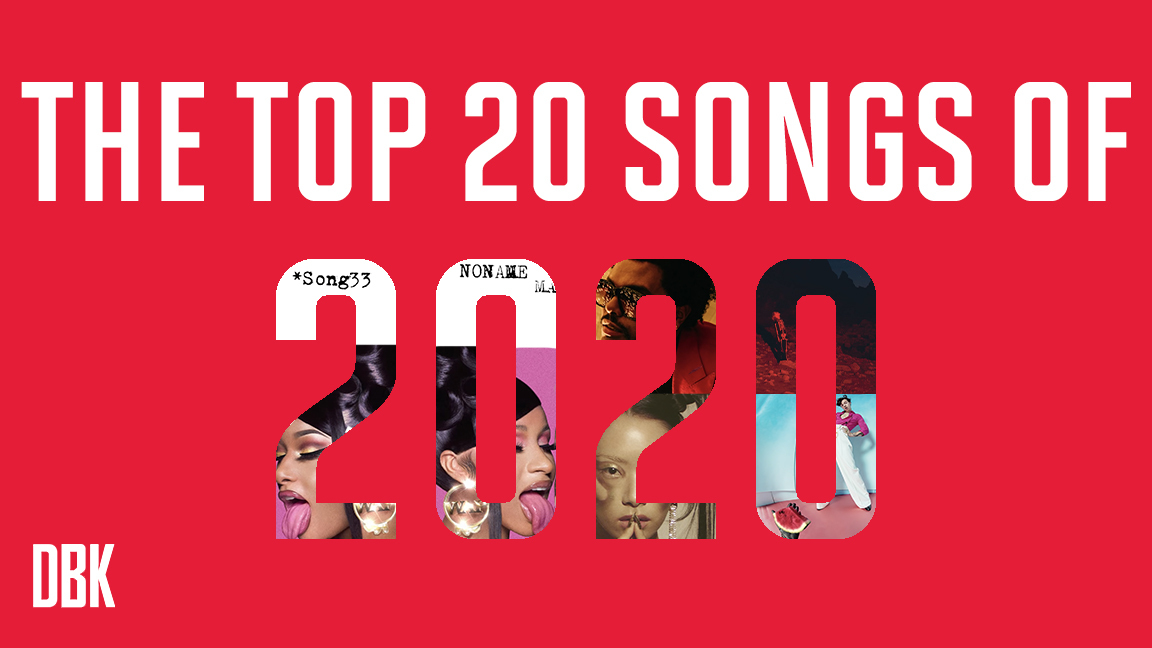 Somehow, in this chaotic and crushing year, some of the best music we’ve seen since the dawn of the millennium has prevailed. We surveyed Diamondback staff about the best and most iconic songs of 2020, and with more than 100 submissions, we’ve now narrowed them down to a top 20. (See what we did there?)

And before we get into it, yes, we realize we are not Pitchfork or Rolling Stone — we are college students, and we will not apologize for the music we listen to!

While there might be a lot from this year we may want to forget, the following 20 songs are the exceptions. So here’s to hoping for a “WAP”py New Year.

The enigmatic Frank Ocean was kind enough to drop “Dear April” this year, blessing our ears with yet another track about accepting the sorrows of heartbreak. The deep, haunting reverb of the backing instrumental only enhances the simultaneous hope and pain in Ocean’s voice, making him sound like he’s almost on the verge of tears. It’s OK, Frank … this song made me cry, too.

The heavily layered synths of “Can’t Cool Me Down” embody Car Seat Headrest’s transition into fame — and all the anxiety that comes with it. No longer do we hear the lo-fi, DIY aesthetics of the band’s prior records. Rather, Making a Door Less Open embraces a new direction toward polished electronic-pop, perfectly conveying the pressure of the limelight in all its glory and grime.

Maybe I’m just bitter that “The Box” torpedoed my Billboard Hot 100 column by monopolizing the top spot for so long that I actually couldn’t write about anything else for more than two months. It’s the one song that gave me a full-on existential crisis in 2020, making it perhaps the best representation of the year as a whole. That’s worth something, right? But seriously, fuck “The Box,” in all its catchy, inane glory.

Every song by the Fleet Foxes feels like a warm hug on a cold winter morning. “Can I Believe You” wraps me up in a blanket of lush choral harmonies, while its sunny folk-rock chorus lulls me to sleep. But most of all, it gives me hope for a new start — maybe when I wake up, it’ll be in a fresh and snow-covered new year.

This one is a delicate ode to subtle everyday cycles and mortality. The song comes from his  album of the same title, Circles, released posthumously in January. The soft song is a simple exploration into Miller’s acceptance of his addiction. The intro to the song, “Well, this is what it look like,” was also popularized by TikTok, humorous in only the way Gen Z can be when dealing with death.

“positions” sets the tone for Grande’s sixth studio album of the same name. The double entendre launched her into her latest era, exploring sexuality on a deeper level. And to top it off, a music video with Grande as commander in chief in the Oval Office? Nothing but respect for my president.

Give Flo Milli a beat and she runs with it. Once you hear her signature “Flo Milli shit, bitch” at the beginning of “Pussycat Doll,” the bars start coming and they just don’t stop. Listening to this song makes me feel the confidence Flo Milli exudes — she is the Head Bitch In Charge.

This song starts with Matty Healy singing, “I see her online all the time,” which honestly epitomizes 2020 and the virtual interactions we’ve grown so accustomed to. In The 1975’s classic style, it starts with a long, relaxing intro which builds up to an upbeat melody I can’t help but dance to.

[‘It’s horrible. Go get it’: The Diamondback’s review of Dunkin’s Sugarplum Macchiato]

“Borderline” brings back retro ’70s vibes with the twirling music patterns and echo-y vocals that Tame Impala does so well. The lyrics question the relationship between being known and being loved — and the dangers of both. The speculative song was released as a single in 2019, but the album it appears on, The Slow Rush, came out in February.

2020 was the year we all gave in to TikTok (if only for lack of anything else to do), and with that came a rush of viral songs (enough for Spotify to start up a playlist titled “Internet People”). If we’re talking cultural impact, Princess Nokia’s has got this one in the bag. But beyond the song’s virality, “I Like Him” is easily a feminist earworm you’ll wish you’d heard of sooner.

The album Ungodly Hour prompted the collective awakening of the people to the greatness that is Chloe x Halle. Everything — from the duo’s humble start as up-and-coming YouTube cover darlings, to the release of their 2018 album The Kids are Alright — has led up to the stunning genre-bending soundscapes and attached visuals of their 2020 rebirth, Ungodly Hour. “Do It” offers just the right amount of feel-good-night-out escapism for this brutal year.

“The Adults Are Talking” makes me feel like I’m eavesdropping on a conversation between two people a whole lot cooler than I am. I can’t help but feel caught in the middle of a squabble between two guitars as they talk back and forth like, well, adults. And considering that Julian Casablancas is truly the master of catchy guitar riffs, I’m certainly not complaining.

Saying something is a “cultural reset” probably aged out about seven months ago, but y’all have to admit — Ms. Apple’s album Fetch the Bolt Cutters was THE cultural reset! FTBC immediately made headlines as one of the only albums to receive a perfect score from Pitchfork, and the accessible exploration that is “Under the Table” — about refusing to shut the F%&# up under the social confinement of someone else’s rules — make it the perfect track.

First of all: No, we did not place this at No. 7 on purpose. After averaging several staff members’ personal rankings of these 20 songs, this is simply where “seven” ended up!

Though any song from folklore was a righteous contender for a spot on this list, “seven” made the cut for its teetering vocals, delicate composition and expert storytelling. Everything that Taylor does well is evident here, and it’s a despairingly delightful listen as a result.

It took J. Cole four minutes to muddle through some jumbled thoughts on police brutality and patronize women on “Snow on tha Bluff.” It took Noname one minute to clap back 10 times harder. Armed with a Madlib beat and a take-no-prisoners flow, “Song 33” recounts George Floyd and the killings of trans women as some of the real issues to be focused on, wrapped up in a not-so-subtle flex. In terms of efficiency, it’s the most potent song of the year.

This song seemed to fully embody the bright raucousness of 2020. It was largely popularized by TikTok dances and other comedic takes on the platform. “Blinding Lights” is the type of song you would sway to at a dim get-together in any other timeline, but instead you’re forced to reckon with “drowning in the night” on your own. The Weeknd did it again with his lush, ambient vocals and existential lyrics, asking us to consider what it is we can’t live without.

Phoebe Bridgers is the queen of sad emo-folk music. In “I Know the End,” Bridgers weaves a bittersweet story of existential dread and impending doom. And she sounds so damn beautiful while she does it.

The track begins as a melancholy ode to the normalized dystopia of American life (how very 2020). The tension slowly builds, then the song’s outro bursts out of what feels like another world, accompanied by beating drums and wailing electric guitar. I find myself screaming next to Bridgers as she happily laments, “the end is here.” It’s catharsis in its purest form.

Though Harry Styles has said his sophomore album Fine Line is “all about having sex and feeling sad,” this single is far more of the former, with a killer brass section, an earworm of a guitar hook and plenty of saucy fruit references, as is Harry’s way.

Though the music video — which was “dedicated to touching” and featured a lot of hot people eating fruit on a beach — felt like a bit of a flex in May, when many of us hadn’t seen people in months, the song is a deliciously simple celebration of summer (and sex).

This year, there was no artist more criminally and obscenely underrated as Rina Sawayama. While her recent album, SAWAYAMA, was beloved by critics and listeners alike, she failed to garner the awards acclaim she deserved. We’re here to help rectify this, Rina!

All the songs from SAWAYAMA are a bop (see “Comme des Garçons (Like the Boys),” “STFU!,” the rest of the track list), but none stand out quite like “XS.” It’s loud, it’s expensive, it’s unapologetic. Every second of it makes you want to buy out the local shopping mall and lather yourself in the riches.

Make sure to check out the equally exciting remix of the song featuring the up-and-coming rapper Bree Runway.

If The Diamondback were a purely populist publication, “WAP” would still have easily been a top choice on this list. Among more than 100 candidates for song of the year, “WAP” showed up on more than any other. It’s easily the most popular, the most talked about and, weirdly, the most controversial song of the year. But anyone who can’t get with the straight-up fun of “WAP” (looking at you, Ben Shapiro) is missing out. It’s got the best lines, best hooks and most ridiculous/awesome/ridiculously awesome music video of any song put out in 2020. In a year when we needed as many distractions as possible, the inescapability of “WAP” turned out to be a blessing.

Stream a playlist of our picks on Spotify:

CORRECTION: Due to an editing error, a previous version of this story misspelled music producer Madlib’s name. This story has been updated.