‘It’s horrible. Go get it’: The Diamondback’s review of Dunkin’s Sugarplum Macchiato 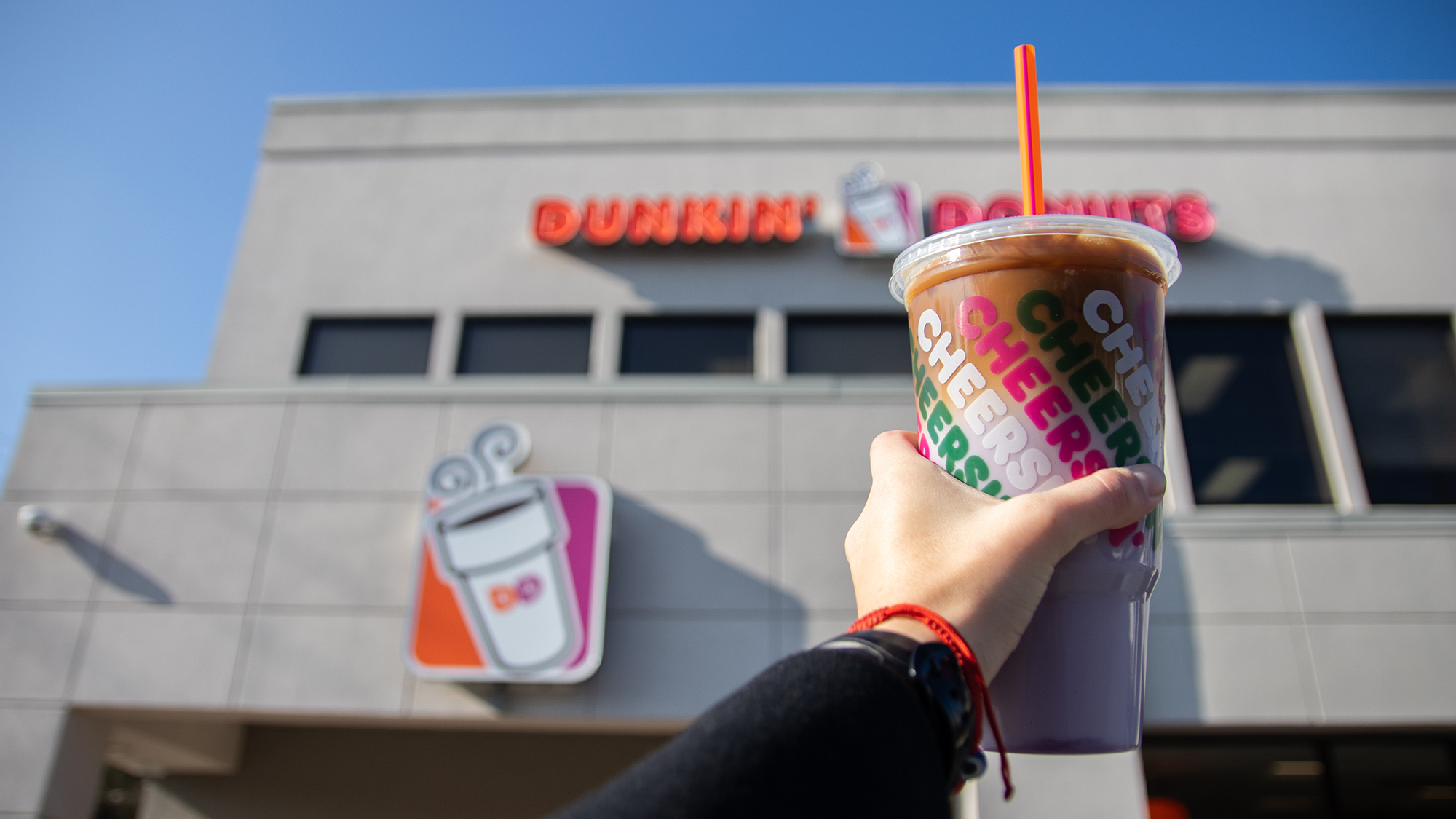 If you’re not familiar, the Sugarplum Macchiato is a holiday-themed drink: a combination of espresso and sugarplum, which Dunkin describes as “bright berry flavors of blueberry, raspberry, blackberry, and plum, accented by notes of vanilla.” The main draw of the drink? Its beautiful lavender color.

Curious? You should be. But we tried it so you don’t have to!

Caffeine is my drug of choice, and I love the color purple and berries, so this seemed like a no-brainer. However, I am a staunch nonbeliever in holiday drinks — peppermint, pumpkin spice and toffee are not my thing. (Although I have developed a soft spot for pumpkin cold foam from Starbucks.)

The Sugarplum Macchiato affirmed that.

The color and caffeine make this drink somewhat worth it, considering my first words upon sipping it were, “Oh, that is interesting.” The first thing you notice is how starkly different the espresso and fruity flavors are. Even with the vanilla in the sugarplum, it’s a big jump, especially if you don’t stir. It gets weirder as you continue drinking and just get a huge dose of what tastes like leftover cereal milk.

I finally gave up halfway through the small size cup and stirred, which made it a little better but not really. Points are for the lavender hue and the fact that I didn’t throw up. I would not drink this again, but at least it’s a pretty color! Though if you like your coffee sweet, maybe this is for you?

What did it taste like? It tasted like cotton candy and coffee spun unwillingly together. It tasted like if someone gave you a lollipop, and then threw hot coffee in your face just to rile you up. It tasted like the color pink. My mom and I tried it together, and she called it “hallucious.” I didn’t know what a sugar plum was before I tried the macchiato, but I looked it up after. It’s essentially a candied plum. The Dunkin website says their drink was inspired by the Nutcracker, and features berry flavors along with plum. Ask yourself — do I want a berry or a plum in my coffee?

If the answer is yes, I have questions. But I have to admit begrudging respect — at least you know yourself that well. I can’t say the same. I got the drink, didn’t I?

Anyway, we fed the machine. I had fun. It’s horrible. Go get it.

I don’t drink coffee everyday, but I enjoy getting holiday drinks from Starbucks or Dunkin every so often, so I was excited to try the Sugarplum Macchiato. I’d never heard of combining berries and coffee into a drink, so I found the weirdness of the pairing enticing.

Because the drink has separate fruity and coffee layers, my first sip was of the berry-plum flavor, which I found tasted mostly as I expected: very sweet and ambiguously fruity. Next, I tried getting a sip of the two layers together. Unlike in other coffee combos, where the flavors mesh, the coffee and fruit flavors felt very distinct, like I’d taken a sip from two drinks at the same time. I finished the small iced coffee, but I wouldn’t buy it again.

My boyfriend tried the drink as well, and offered this review: “If you put enough sugar and syrup in coffee, it becomes not the worst.”

It turns out he got a sip of just the fruity layer, so take that as you will.

I just wanted it to be more purple. I tried to feverishly swirl the drink to further distribute the modest purple hue, but it was in vain.

I went to try it, and in the moment, all my hesitation whisked away and I was ready to love this ridiculous beverage. And yet, hesitation led me correctly.

Dear God, it was so bad. Why would anyone ever want a beverage so nauseatingly sweet? I could feel the cavities piercing each of my individual teeth with every sip.

To explain the drink succinctly: it’s like someone melted down jelly beans and used them in lieu of milk to saturate your latte.

The only redeeming factor of the drink is that once I’d left it out for a few hours to let it think about what it had done, enough ice had melted to dilute the drink and make it fractionally more bearable. I still finished the drink, but only because of those brave ice cubes and my own stubbornness to not let my $4.29 go to waste.

I’ve never tasted “sugarplum” before, so I wasn’t sure what to expect from this drink. I’ve also never had Cap’n Crunch cereal, but this is exactly what I imagine the berries variety tastes like — it was like a fruit having an identity crisis.

I got a small one in case I didn’t like it, and that was an excellent decision. I finished the purple part before I had the chance to form a final decision on its exact flavor. The espresso was jarringly bitter in comparison. It might taste better if you stir it, but you aren’t supposed to stir a macchiato (I Googled that to confirm!).

I wouldn’t buy it again or go out of my way to try to replicate it at home. Also, I docked a point because my friend’s latte came in a holiday cup, but mine didn’t.

I thrive off caffeine, usually consuming it in the form of lattes, espressos and matcha. Although I don’t typically add sugar to my coffee, I am often down for sweeter novelty holiday drinks. When I got the large size of the sugarplum macchiato, I was most excited by the fun color.

My first thought when I took a sip was, “Did I just step into a musty gas station off of I-95?” The sugarplum, vaguely fruity, was sickening. It got better once I had some of the espresso, because the bitterness made the sweetness a lot more bearable. The best the drink got was when I would position my straw right at the spot where the coffee met the sugarplum; it wasn’t too terrible, and it was actually pretty nice and creamy. After I decided to mix the two flavors together, my boyfriend had to finish the rest of the drink.

I would recommend trying the smallest size of this once, just to experience it for yourself. I’m glad I got to photograph it, but I definitely won’t be spending any more money on it.

[Breakdancing doesn’t belong in the 2024 Olympics. Here’s why.]

The two parts of Dunkin’s new Sugarplum Macchiato, much like my ex and I, are simply incompatible. I’ve only had bad experiences with multicolored refreshments, so I eyed the purple cream at the bottom of my cup with considerable trepidation. And I was right to be nervous: On first sip, it tasted like I was chasing a shot of cherry cough syrup with iced coffee. Not pleasant.

When, out of some morbid curiosity, I continued sipping, I discovered that I eventually got used to the strange flavor of the cream (which makes little effort to taste like any fruit, much less a plum). The drink began to taste like a worse version of Starbucks’ Vanilla Sweet Cream Cold Brew (a drink I adore). It wasn’t as sweet as I expected it to be, which was a pleasant surprise.

All in all, it’s not the worst thing I’ve ever tasted, but certainly not the best;  I won’t be choosing to drink it again. I liked the Sugarplum Macchiato best without the sugarplum — and that’s just a macchiato.

Because it’s the holiday season, I felt it was only appropriate to write my review in the form of a carol:

“What had started out with feelings of jolly

Had quickly become an incredible folly

For this piece, the single distinct obbligato

Was the Dunkin Sugarplum Iced Macchiato

What began so well, so sweet, so divine

Quickly put someone on a major decline

Call it fate, call it karma, call it meant to be

But heads once held high ended up in the latrine

Yes, one writer, and I won’t say who