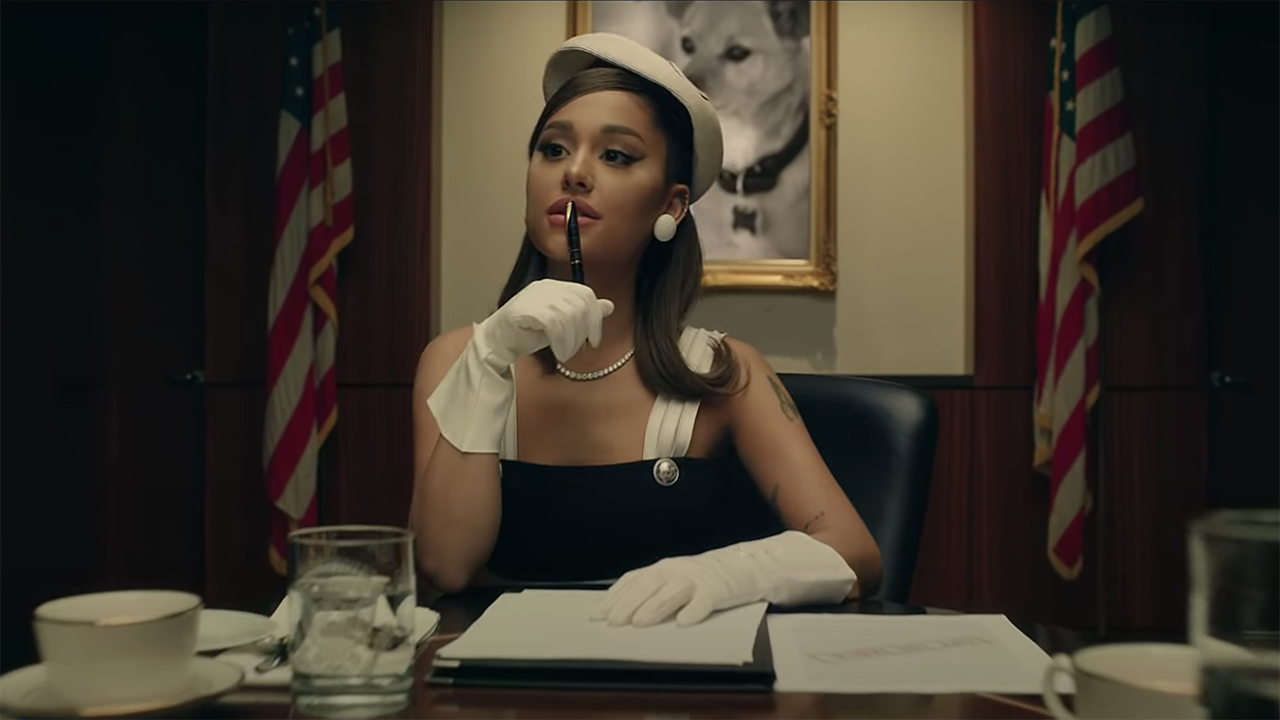 A still from the oddly patriotic video for 'positions.' (Photo via YouTube)

If there’s one thing to consider about an Ariana Grande album, it’s that it might take a minute for it to fully grow on you — I remember feeling that way at first when she abandoned her originally R&B-influenced sound and ventured toward traditional pop. The cycle began with Dangerous Woman, and we saw it again with Sweetener. With each of these projects, there’s an inexplicable trend where very few songs fully showcase her vocal range.

But with time and additional listening, her lyrical and vocal nuances begin to shine through — and Positions is no exception.

I was originally taken aback by the surface-level simplicity of the album. It’s a stripped back ode to sex — and just about nothing else (just listen to “34+35” if you’re confused). Don’t get me wrong: We love to see it! But when all the songs have a similar message, the sound being relatively similar throughout can lead to a dangerously dull combination. As a result, Positions felt a bit monotonous at times.

Another issue I had was the same one I had initially with Sweetener — where is the belting? Ariana has one of the strongest, most amazing voices pop music has seen (and will likely ever see). What possesses her to restrict herself?

And then, I heard the whistle notes at the end of “my hair” and effectively shut myself right up.

[After eight seasons, ‘Below Deck’ still reels in viewers]

The lead single, also titled “positions,” was catchy and cute, but ultimately predictable. However, Ariana never releases her best song first (see: “no tears left to cry,” “thank u, next,” etc.), so at least she’s consistent.

The set has a strong start with the orchestrally sassy “shut up.” There’s something incredibly satisfying about hearing Ariana angelically singing the words, “you know you sound so dumb,” over an entire string arrangement. Play this song for the next person that isn’t matching your energy! At this point in 2020, we’re leaving the dumb-dumbs in the dust.

Although Positions extends Ariana’s streak of no Nicki Minaj features on an album to an agonizing two (the limit should be ZERO), she still acquired quite the guest list. The Doja Cat collaboration “motive” is a strangely enticing bop: When Ariana asks you what your motive is, you feel like you have no choice but to tell her.

I’d comment on The Weeknd song “off the table” or Ty Dolla $ign’s appearance on “safety net” if I could strongly remember what they sounded like after listening to the entire album nearly a dozen times. Hmm. Next paragraph.

Positions peaks toward its latter half: “love language” is an effortlessly cheerful, seductive ode to dirty talk, “obvious” is another quicker track that is quite the earworm, and “my hair” takes the cake for top serve on the album — I mean, seriously, just listen to those whistle tones.

Some of the tracks that drag down the album’s net average had points removed just for being a bit too slow and similar-sounding. Sufferers of this crime include “nasty” and “just like magic,” in addition to “off the table” and “safety net.”

All in all, Ariana knows how to command the path of mainstream music, and she’s done it again with Positions. Although some of these songs pale in comparison to much of her existing discography, there are enough catchy songs here to dot the charts and permeate the radio waves.

Positions is in no way her best album — and that’s OK. It would’ve been exciting to see her experiment with a wider variety of sound if she wasn’t going to explore a wide variety of subject matter. But I’m not acting like I won’t have “my hair” on repeat for the next several weeks, so make of that what you will.