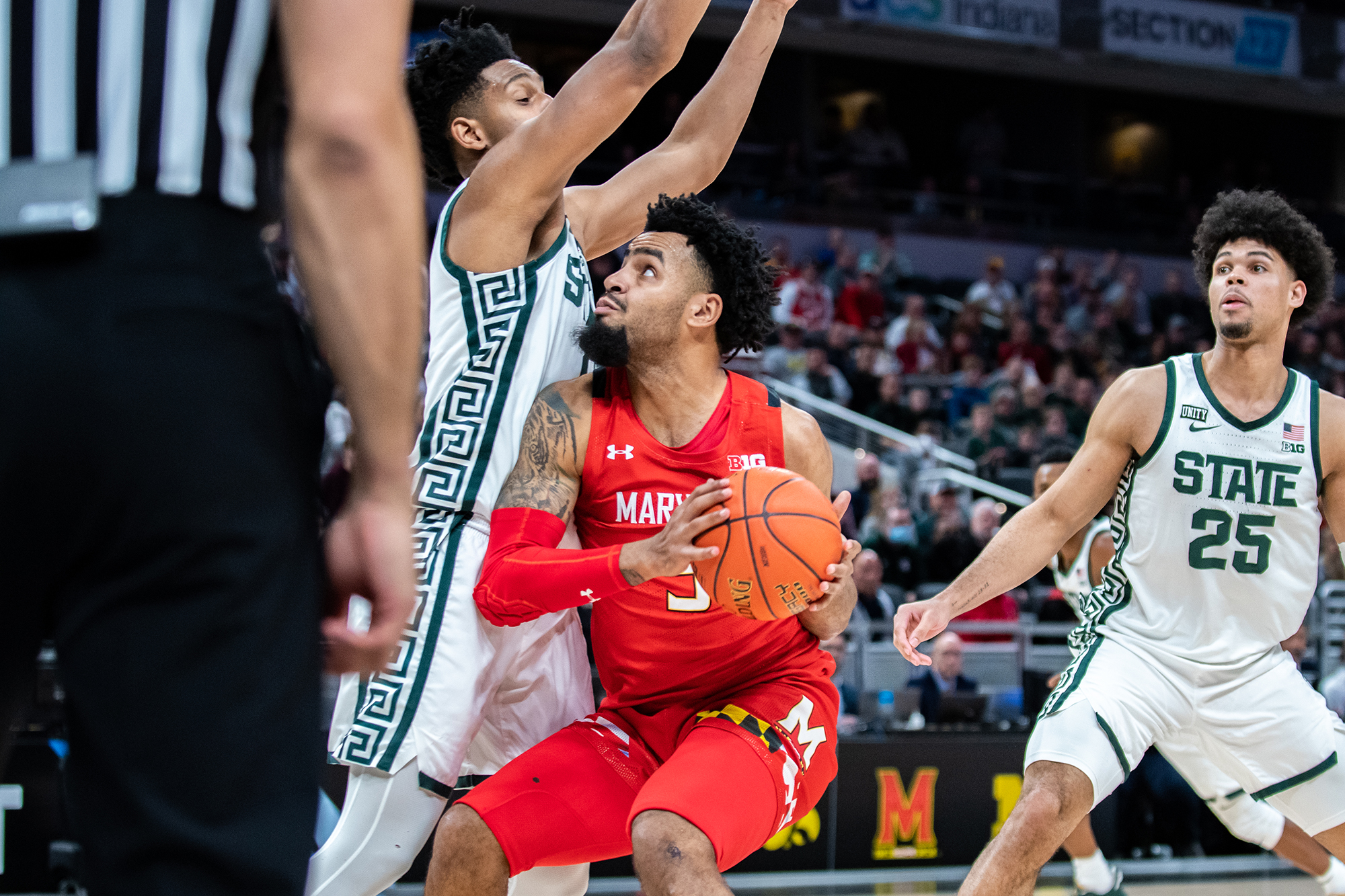 Eric Ayala backs down a defender during Maryland men's basketball's 76-72 loss to Michigan State on March 10, 2022 in the Big Ten tournament.(Joe Ryan/The Diamondback)

When Eric Ayala joined Maryland men’s basketball in 2018, the program looked very different than it does now.

The Terps looked primed to start truly making a mark under their head coach, possibly ushering in a new era for Maryland men’s basketball.

While his time isn’t guaranteed to be coming to an end, it’s likely Ayala will leave the program, not after years of unparalleled success but of growth and change.

The 2021-22 season will probably be remembered for its chaos, but also some relentless performances from the players who were dealt a difficult hand.

Ayala chief among them, the senior from Wilmington, Delaware, put in some historic games that put him with Terp royalty.

“I developed into a man and the things that I’ve learned from guys, our managers, our coach, the support staff that we have and everybody that’s come into the program,” Ayala said after the Terps’ Big Ten tournament loss. “I’ve learned so much and I’m proud to say I’m going to be a future alum for the University of Maryland.”

Ayala began his season by scoring his 1,000th career point in the season’s opening contest against Quinnipiac.

There were other grand moments throughout the season as he posted career-highs in points and rebounds while notching his first double-double and becoming the fifth Maryland player to record 200 career three-pointers.

He certainly had his fair share of struggles, including missing the Terps’ Feb. 13 matchup with Purdue and being limited against Nebraska a few nights later due to a wrist injury.

But the impact Ayala had was never in doubt when he took the floor at Xfinity Center. The longest tenured Terp, Ayala was the sparkplug all year long and earned an All-Big Ten honorable mention.

The season, in essence, was defined by the announcement on Dec. 3, 2021, that Mark Turgeon would step down from his role as head coach. Whether it was the ugly losses to George Mason and Virginia Tech or extra jeering from unsatisfied fans, the early season move would derail what was considered a top team during the preseason.

After an unexpected appearance in the NCAA tournament just nine months prior, Turgeon had worked the transfer portal to fill the obvious holes in the lineup from that squad.

Squeaking past mid-majors and turning in lackluster performances against power teams resulted in a coaching change after just eight games.

Two days after Turgeon’s departure was announced, Danny Manning — after being named interim head coach — was at the helm for the first game of conference play.

Manning was brand new to the team, joining the coaching staff just a number of months before being thrown in charge of the Terps. Despite plenty of coaching experience with Wake Forest and Tulsa, the Big Ten offered a brand new challenge.

While Maryland ended up posting its worst overall (15-17) and conference records (7-13) since the 1992-93 season, Manning was largely hailed around the program for stepping into the role unexpectedly.

Fatts Russell: “I want to thank you, Coach [Danny Manning]. That was a tough situation that you just walked in to. But he’s just been that person that we needed. So thank you, Coach. Thank you for the rest of the Maryland community for accepting us and staying with us.”

Even as the Terps introduced the eventual successor for the head coaching job, athletic director Damon Evans thanked Manning for his work.

“His professionalism and his grace is something I’ll never forget,” Evans said on March 22.

Although it was Turgeon that brought in a large class of transfers under his watch, Manning ended up being the one to put them into place. It was a mixed bag with players such as Qudus Wahab, Ian Martinez, Pavlo Dziuba and Simon Wright often getting lost in a higher caliber conference than that of their previous teams.

But two additions to the squad in Fatts Russell and Xavier Green offered Maryland some impact moments in what was the definitive season of each of their extended careers.

Green became the top one-on-one defender for the Terps, becoming a go-to in the final minutes of tightly contested games. His patented ‘X’ was a sign he was ready to lock down his opponents and even sink the rare basket.

Russell became, arguably, one of the most explosive players in the Big Ten. After spending his first four seasons with Rhode Island, the expectation was that Russell would take on the role of provider.

However as Manning took over the head coaching job, the offense flowed more through Russell, a dynamic driver to the paint with the finesse needed for an undersized guard to thrive in a physical conference.

The 5-foot-11 guard averaged a team-high 15.1 points on the season, earned an All-Big Ten honorable mention and became a fan favorite in no time.

“I love Maryland,” Russell said. “I’ve only been here for this year, but the relationships that I gained, the people that I met, coach Manning and the rest of the coaching staff and my teammates, I don’t know how to put it into words.”

The team wasn’t entirely new, with stalwarts Donta Scott and Hakim Hart being constant contributors for Maryland in their junior years. Hart made the biggest leap of any team member, adding 15 pounds of muscle in the offseason and improving both his shooting ability and his on-ball defense.

He lead the team in steals and averaged two more points per game than he did in the previous season.

Now they’ll each have a decision to make.

On March 21, the Terps’ announced they had found their new head coach. Days after Seton Hall was eliminated from the NCAA tournament, Kevin Willard was named the 10th head coach of Maryland men’s basketball.

After spending 12 seasons bringing the Pirates into the national spotlight, he aims to bring the Terps back to national success.

“I would not be here,” Willard said in his introductory press conference on March 22, “I would not have moved my family and left a place that I loved very dearly if I did not think this was a place that we should be winning national championships and is a top-10 job.”

Willard has already filled out some major pieces of his coaching staff with the hiring of Tony Skinn and David Cox, two coaches with local ties.

After Turgeon’s exit from the team, so went his star recruit for the following season, Bobi Klintman, a four-star forward that decommitted on Dec. 31.

Any member of the Maryland squad from last season has the opportunity to use the transfer portal as Willard establishes his plans for the Terps moving forward. Some already have.

Guard Marcus Dockery already found his landing spot at Howard and Wahab announced his intentions to explore his chances in the portal.

While no one else has made a move as practices with Willard at the helm have already begun, the option remains open and will play a grand role in what Willard’s first season looks like.

The lasting memory of Turgeon leaving may have meant a sour taste for fans and players alike, but Maryland rose to the occasion multiple times throughout the year.

And while the season may appear lost on paper — a losing season and no wins in the Big Ten tournament — there were surely moments.

A ranked win over Ohio State on the same day the Terps celebrated their 2002 National Championship team. A victory at Rutgers, something only one other Big Ten team managed on the year. A near comeback against Michigan State in the Big Ten tournament.

Even at a historic low, Maryland made moments.

Those games and the players that made them special don’t look like they’ll fade anytime soon.

“I’m always going to come back to Maryland,” Russell said. “Check out the guys and just see how the program’s doing. It’s a part of me now, I’m proud to be a Terp.”