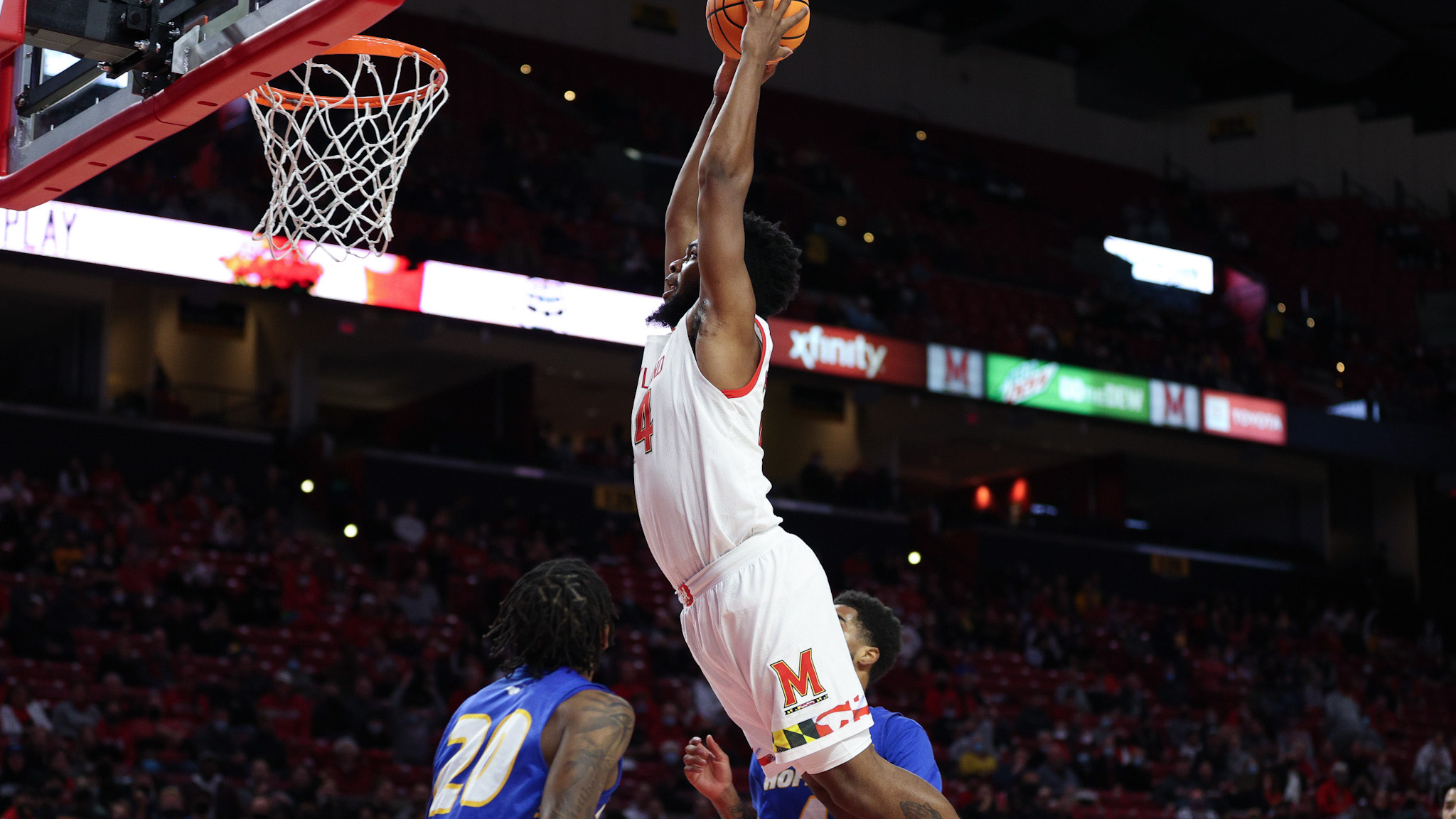 The swat from the freshman center sent the Terps barrelling down the court toward the opposite basket in the early going of the second half. Eric Ayala picked up the ball in transition and dished it to Fatts Russell.

Russell paced his way into the paint before sending a pass over his left shoulder to a full-speed Donta Scott.

“I just heard Donta screaming ‘Fatts! Fatts!’,” Russell said. “We’ve been in those situations for a lot of time, high school and stuff like that. When I hear him I just trust my ears and trusted him.”

Scott lept and slammed the ball into the net, with an extra second of hangtime on the rim to boot.

Scott’s dunk shifted momentum in his team’s favor. After 10 ties and 10 lead changes, Maryland came out on top against Hofstra in the final seconds, 69-67.

“That’s a great win for us,” coach Mark Turgeon said. “We played better, played with confidence. We expected to win even when we were down four late.”

Ayala got off to a strong start from the field, as he has done frequently. A mid-range jumper, three-pointer and layup gave Ayala eight points through the first seven minutes. However, he cooled off for the remainder of the half.

The usual suspects this season — Ayala, Scott, Russell, Qudus Wahab — weren’t quite as effective in the first half as they had been in the first four games of the year.

It was Hakim Hart that started pushing the Terps past a rough patch midway through the opening half. A pair of threes — including his first of the season — put Maryland ahead by four, tied for its largest lead to that point.

A third attempt from beyond the arc rimmed out to the chagrin of a Terp student section ready for another game-changing basket.

What followed was a solid run from the Pride in the form of an 11-3 run that threatened another halftime deficit for Maryland.

However, another unexpected contributor pushed the Terps to the end of the half with a lead intact. It was Ian Martinez that took Hofstra to task in the closing four minutes of the first period.

He started a 9-3 run for Maryland with a fadeaway jumper, followed by a near-corner three that brought the Terps within one point.

“That’s the Ian that we see every day,” Russell said. “He’s just tremendous. He can shoot it, he can score it. He was a really great defender. He kind of showed the whole package today, I’m happy for him.”

And Martinez ended his work for the half getting a dunk in transition off of a Xavier Green steal. Scott’s two free throws in the final minute gave Maryland a 34-31 edge at the half, it’s first halftime lead since the first game of the season against Quinnipiac.

Although the Terps were in the lead, turnovers and fouls were causing problems and kept the Pride within striking distance throughout the game. Hofstra capitalized on those errors as well, turning Maryland’s 10 first-half turnovers into 17 points.

Despite not putting Wahab in the game during the entire second half, the Terps began working the paint more in the second half. Relying on another mid-range shot from Martinez, Scott’s dunk and early layups from Reese helped build Maryland a seven-point lead, the largest of the game.

However, the Pride did not go away easily. Nine unanswered points turned the tides of the match from a six-point Terp lead to a slim deficit.

Russell was the one to emerge and get Maryland through an important stretch, scoring seven straight points for the Terps.

But Hofstra’s three-point shooting was spot on down the stretch. Back-to-back threes from Jalen Ray, who finished with 18 points against Maryland, left a four-point gap with just over a minute remaining.

Timely layups from Reese and Ayala tied the game with under 30 seconds on the clock.

The Pride had the expected last chance to win the game, dribbling the clock down below seven seconds. However, Ayala was not letting Hofstra’s Omar Silverio have the chance to get the game-winner, blocking his attempted three.

Martinez fielded the ball and was instantly fouled, sending him to the line with 4.2 seconds on the clock. He hit both of his free throws to give the Terps the edge.

“When I was outside in the shootaround…I was thinking, maybe today I’ll be in that situation,” Martinez said of his mentality at the line. “So, I’ve gotta think I’m the only one in the gym just like right now. It worked for me.”

Needing a miracle bucket, the Pride attempted to get a shot off — but Maryland never allowed it.

Between using fouls that the Terps had to give, Reese blocking an inbound try and Russell finally stealing the ball on the final inbound, Maryland was able to close out a contentious game with a win.

“The best part is they did everything right,” Turgeon said. “You don’t practice those situations all the time, you just don’t. For them to listen in the timeout…that’s really what’s the most important.”