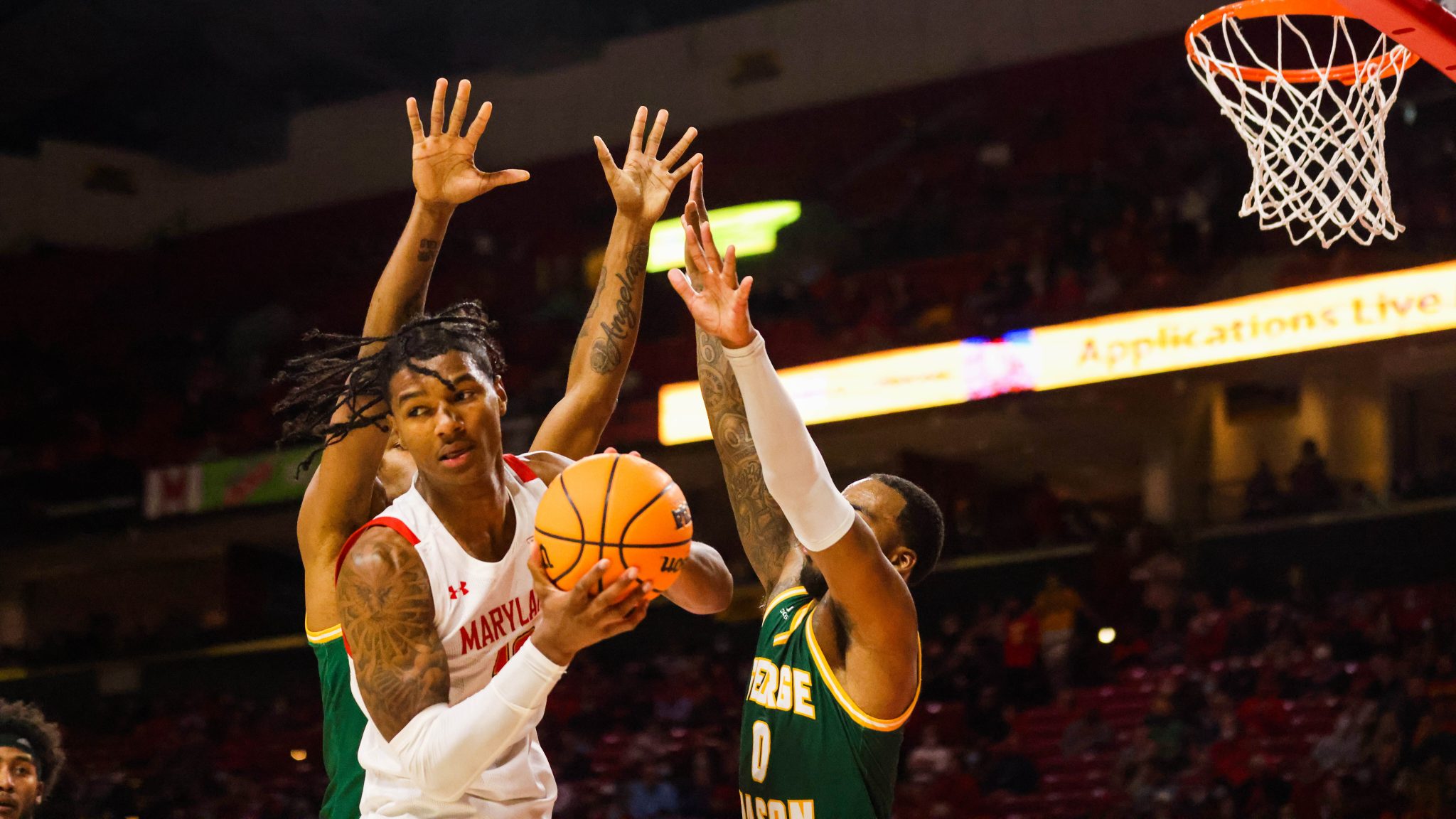 Maryland men’s basketball trailed George Mason with under two minutes on the clock. Eric Ayala took a shot from deep when the Terps were down 65-60. And it dropped.

Josh Oduro followed with a jumper to extend the Patriots’ lead to four.

Ayala had another chance from behind the arc. He took it. And the home crowd rose to its feet. The ball swished through the net and brought Maryland within one.

But, Oduro made another basket to grow his team’s lead again.

On the next play, Ayala tried one last time from three. This time he missed. And that miss depleted any chance of the Terps completing their comeback.

However, Ayala didn’t seem fazed by his team’s loss.

“I’ve been through the ropes. A game like tonight, it doesn’t matter to me as much because we got such a long season and we got so many games to go,” Ayala said. “I think we needed it as a team.”

After a close first half against George Mason, No. 20 Maryland fell off in the second. Dispite a better shooting performance than its previous two games, coach Mark Turgeon’s squad couldn’t find the lead that it desperately needed in the second half and Maryland fell to George Mason for the first time in program history, 71-66.

The Terps opened their game against George Mason with their best first-half shooting performance this season. But the Patriots brought similar accuracy with them.

“They made big time shots,” Turgeon said. “Sometimes it’s just not your night.”

The game began with three deep baskets. The first points of the game came from a three by Eric Ayala. But George Mason quickly retaliated with one of its own— D’Shawn Schwartz easily tied the game to great fanfare from the Patriots’ supporters at the Xfinity Center.

Shortly after, Scott hit his first of three threes on the evening and ushered in another back and forth contest for Maryland. There were three lead changes and two ties in the first half with the largest lead of the half being a nine-point advantage for the Terps.

Turgeon’s squad struggled to shut down Schwartz who dominated for George Mason. He scored 24 of the Patriots’ 71 points and pulled down nine rebounds.

Maryland found itself down at the half for the third consecutive game, 32-31. And the back and forth continued to start the second half. DeVon Cooper began the half with a three-pointer and, just after, Ayala followed suit. After Cooper and Davonte Gaines scored a basket each, Qudus Wahab and Hakim Hart combined for four points of their own.

The Patriots then began to pull away. George Mason charged out to a 10-point lead on a 9-0 run over almost three minutes.

Reese, who dropped his first shot from deep in a Terp jersey, broke Maryland’s scoring drought with a layup from under the basket. Reese had an impressive night from the field, dropping 12 points, many of them deeper than his usual spot in the post.

Green dropped a layup off a fast break and Ian Martinez helped with a jumper. Wahab sank Maryland’s first two free throws of the night to cut into George Mason’s lead.

But the Patriots kept pushing back. Schwartz and Cooper exploded in the second half, combining for 21 of their team’s 39 second-half points and maintaining their lead.

The Terps were down five with over three minutes left when Fatts Russell took a shot from deep, but missed. Schwartz rebounded the ball and dribbled down the court and took an uncontested three to put the Patriots up by eight.

Ayala retaliated with a three, but Maryland couldn’t get the ball away from George Mason. After Cooper sunk a free throw to earn a second one, he missed, but his team rebounded the ball to reset.

Once the Terps got the ball again. Ayala hit another three to bring the game within two points with just over a minute and a half left. But, two clutch shots from Josh Odura sunk Maryland’s chances.

Final stabs at a three by Ayala and Scott didn’t hit and the Terps were upset by the Patriots, losing to their local foes for the first time in program history.

“[George Mason] is playing with incredible confidence right now,” Turgeon said. “We think we’re supposed to beat everybody. It’s not that way, it’s too hard.”