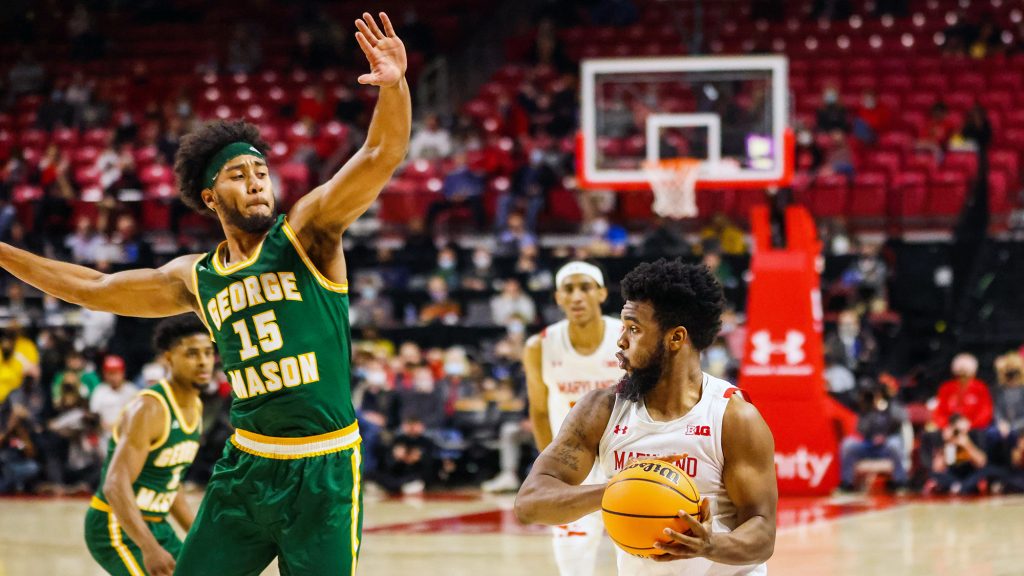 With time running out for No. 20 Maryland men’s basketball to complete a comeback against George Mason, Fatts Russell fell to the floor.

After the Terps’ guard was tangled up with Xavier Johnson after an attempted three, Russell had to recover quickly and charge to the defensive end to avoid falling into a deeper deficit.

Coach Mark Turgeon had stressed the importance of transition defense before the game — worried about the driving ability the Patriots had — but it was D’Shawn Schwartz who Maryland needed to be better prepared for.

Johnson received a long pass off the rebound from Russell’s miss and weaved through the paint before dishing the ball outside. Three passes later and Schwartz, who scored 24 points against the Terps, had ample space to launch from three and give George Mason another momentum-killing bucket.

Maryland (3-1) faced strong players in its first few games, but when it came to Schwartz, the Terps had no answer for a stellar first half.

“Schwartz was terrific,” Turgeon said. “[George Mason is] good. I try to explain that to people, that they’re playing a really good team … our defense better be outstanding, and it wasn’t outstanding tonight. That’s why we ended up losing.”

Maryland was in a similar situation to that of Thursday — down one point at halftime. George Washington’s Joe Bamisile had torched the Terps for 16 points, and they needed to make an adjustment.

Bamisile managed just four points the rest of the half — only two from the field.

Two days later, Ben Shungu ran roughshod over Maryland in the opening half with 20 points. The Terps played some of the best defense Turgeon said he’s seen during his time at the program in the second half. Shungu only added seven more points.

When faced with Schwartz, the script changed.

The Colorado transfer hit three first-half three pointers that pushed the Patriots with an edge at the half. Maryland needed to respond just as it had the previous two games — but it never came.

Schwartz was even better. He finished the second half with 13 points off of an additional three makes from beyond the arc.

The Terps made Ian Martinez the primary defender on Schwartz down the stretch. The sophomore disrupted play more than previous defenders had, but inevitably, the switch didn’t quell Schwartz.

“He just played hard,” guard Eric Ayala said. “That’s one of his talents is how hard he plays. I think if you play hard, there isn’t much [more] you can do.”

Strong play from the remaining George Mason squad certainly helped Schwartz stay in the game. Four Patriots had double digit points, after only Schwartz had 10-plus at the half.

DeVon Cooper and Davonte Gaines both had impactful performances, combining for five-of-nine shots from three.

But it was junior forward Josh Oduro who made the clutch baskets, including the Patriots’ final two from the field. The second-to-last was a shot-clock beating fade from Oduro that Turgeon was astounded by postgame.

“That was an incredible play,” Turgeon said. “That was a high, high level play in a big-time situation. He misses that, and we might win the game. But he made it. You gotta shake their hand a little bit and say ‘Great win, guys.’”

With an unexpected mark in the loss column, Maryland will host a Hofstra team with a two-pronged shooting force in Zach Cooks and Jalen Ray. The pair are averaging a combined 42 points per game, though Ray has only played in one game so far.

The Pride (1-2) doesn’t have the results it would hope through three games, but it’s clear the Terps are more vulnerable than expected. With three straight games trailing at the half, second-half adjustments seem to be the name of the game for Maryland pulling out wins in the near future.

“I feel like we just take this one on the chin, really,” forward Julian Reese said. “We played, we fought hard. Just prepare more in practices and show more effort. Just show you care.”