Ayala, Russell show out in Maryland men’s basketball upset of No. 22 Ohio State, 75-60 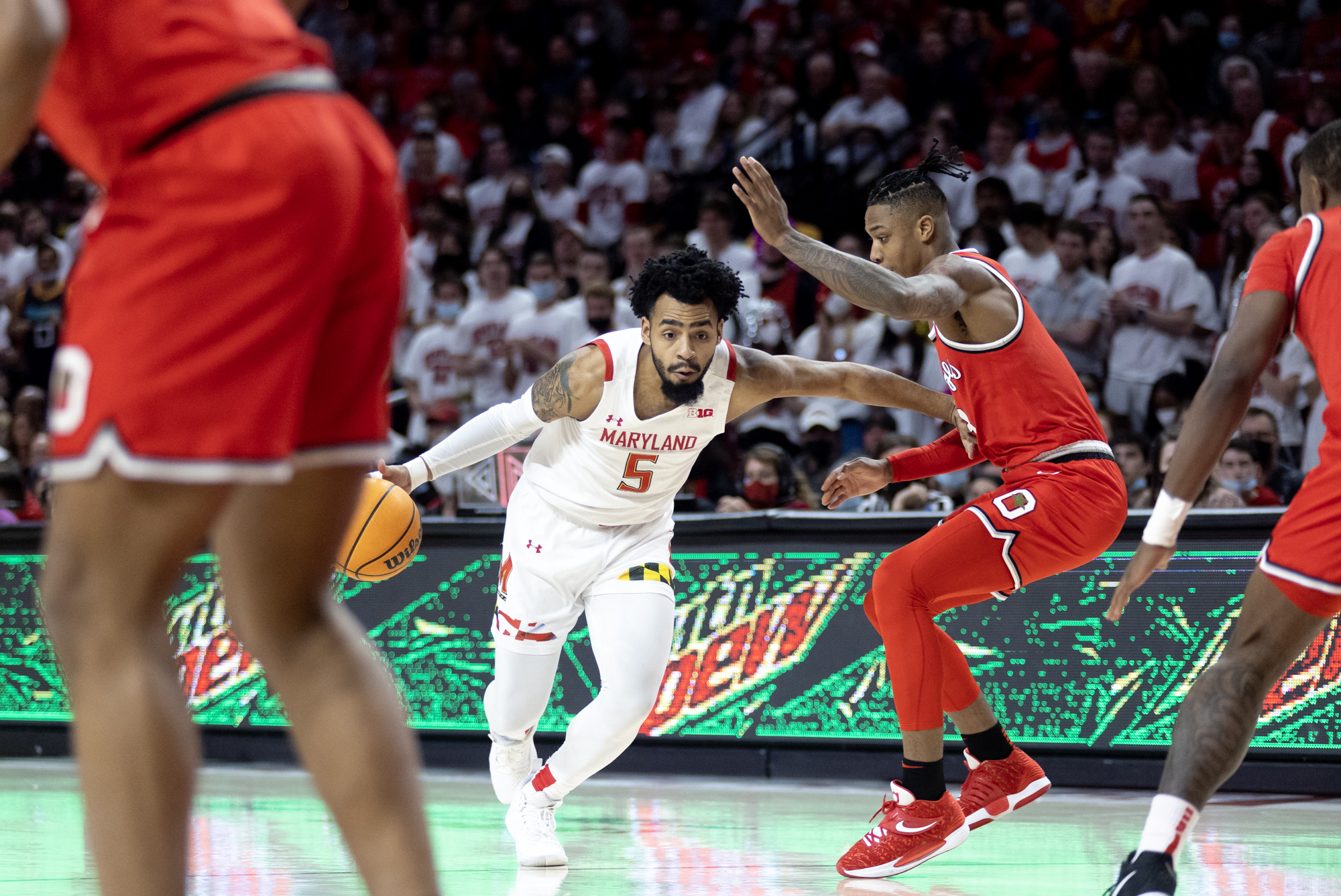 On a day where Maryland men’s basketball celebrated champions, the Terps seemed to relive the glory days.

It’s been a tumultuous season for Maryland — still on the verge of a rare losing campaign — but faced with a No. 22 Ohio State squad that throttled it the previous meeting, the Terps rose to the challenge.

Eric Ayala and Fatts Russell were the driving forces, scoring 50 combined points, as Maryland upset the Buckeyes in front of a raucous crowd, 75-60.

“It was a legendary night and I’m glad we fought as hard as we did to get the win,” Russell said.

The Terps (14-15) were heard early in a must-win game against a challenging Ohio State team. Ayala made a heavily contested drive to the basket to bank in the first score of the.

A few errant shots from Ohio State (18-8) left the door wide open for Maryland to take a controlling lead off the bat — something the Terps have rarely managed.

Three-pointers from Donta Scott and Fatts Russell, who’s own shot pushed him past the 2,000 career points mark, put Maryland ahead 8-0. Buckeyes coach Chris Holtmann called a timeout to stop the bleeding.

The break did some good for Ohio State. E.J. Liddell helped boost the Buckeyes on a 12-4 run with a jumper in the paint and three makes from the foul line.

Liddell earned the trip off of a Julian Reese-foul from beyond the arc. Reese played just under two minutes of the opening half after racking up two quick fouls.

Ayala started what became 11 of the Terps’ next 13 points with a steal. As he sped down the court, a slight hesitation allowed the guard to thread the needle between two Buckeyes and finish a layup.

A short range jumper followed by a deep three put Maryland up by four. One last layup, the culmination of an extended possession by Ayala, boosted him to 13 points in the half.

Scott and Russell each found another basket before the period ended, both coming off of plays by Ayala. Two late makes by Kyle Young kept the score close at the half, 32-28.

“The energy was ecstatic,” Scott said. “We fed off that, brought that energy to the court from the beginning to the end.”

It was a slow first half for Qudus Wahab, but he was fast out of the gate in the second, laying in a bullet pass from Russell from just beneath the rim. A Scott jumper pushed the Terps back out to their largest lead of eight points.

But Jamari Wheeler caused problems for the Terps in the second half, scoring eight points in quick response.

Maryland and Ohio State played tug of war in the second half, with the Buckeyes pushing for a lead and the Terps pulling back an arms’ length advantage.

The Terps focused on driving to the basket and getting themselves to the charity stripe. And it paid off.

“In the second half we did a much better job,” interim head coach Danny Manning said. “We got the ball downhill on drives. We were able to draw some fouls that way as well. We were able to put pressure on Ohio State by getting paint touches.”

Hakim Hart drove to the basket and as his layup fell through the basket, a foul was called to allow him an extra point for his efforts. The same happened for Scott following a missed three-point attempt by Xavier Green.

Scott, Russell, Ayala and Green took trips to the line down the stretch. They capitalized on their free-throw chances, making 14-of-18.

“The Big Ten is physical,” Ayala said. “It’s something that you kind of gotta embrace. The guys who kind of shy away from it die out in the game.”

Free throws served well enough to keep Maryland out in front, but it would take deeper shots to get the separation the Terps craved. After Green missed a free throw, Reese rose for a key offensive rebound.

And as the ball worked back to Russell, he was ready for a big-time bucket.

Russell hit a three-pointer, — his fourth of the game. The make was shortly followed by a fading three from Ayala as Maryland took full control of the matchup, ahead by 11.

It was textbook from there. The Terps’ defense stifled Ohio State, keeping them without a basket from the field for five minutes. More makes from the line and two dagger threes from Russell drew the line in the sand.

“At a time like this, we dangerous,” Ayala said. “We’re the team that nobody wants to see.”