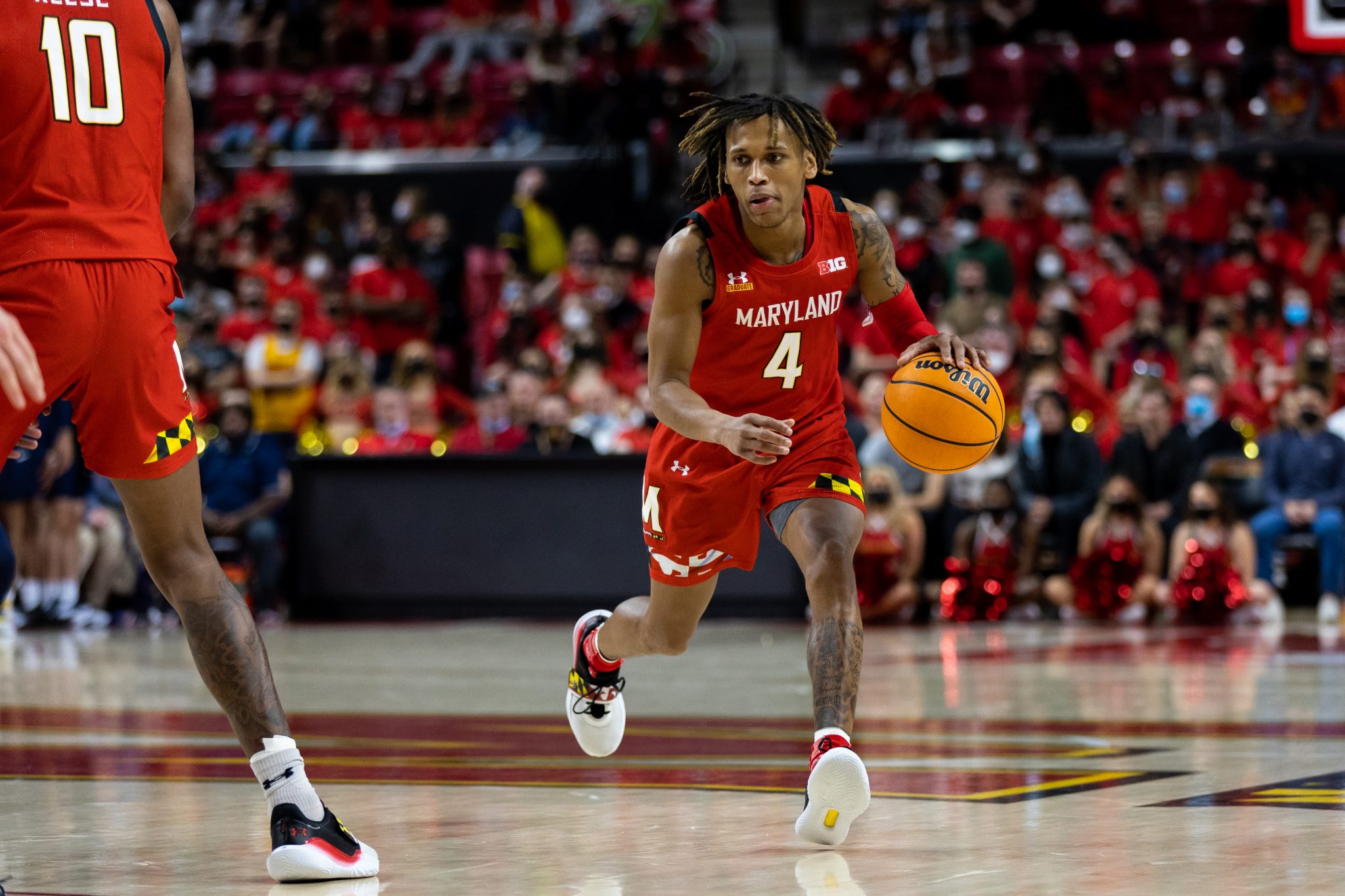 Despite having momentum on their side, the Terps couldn’t keep up with the Hoosiers’ dominance in the paint. Indiana scored 44 of its 74 points in the paint — Maryland only had 24 from down low.

Indiana dunked on the Terps six times and the Hoosiers never once gave up their lead. They topped Maryland for the second time this season and snapped a five-game losing streak — the Hoosier’s last win was their victory over Maryland at the Xfinity Center on Jan. 29.

Indiana led for all but the first 61 seconds of its contest with the Terps and prevented them from stringing together a late-season winning streak.

“We tried to take them out of their rhythm but they’re really good at home,” Fatts Russell said. “Once they got going, it was hard to stop.”

Maryland was back in its uneasy midseason form in the first half. After keeping the game close in the early goings, the Terps fell behind.

Indiana dropped the first four points of the matchup, while Maryland’s first score came from Qudus Wahab — making just one of his two free throws at his first trip to the line.

Every point the Terps scored, the Hoosiers had an immediate answer.

Eric Ayala drained a three and Miller Kopp followed with a jumper. Donta Scott floated a fadeaway jumper over an Indiana players’ head and Russell crashed for a layup, but Parker Stewart’s three on the next possession kept a lead out of Maryland’s reach.

Two unlikely baskets happened on successive possessions. Race Thompson’s second free throw bounced off the rim and directly in front of the basket — but not before Jordan Geronimo gave it a hard spike into the floor.

Geronimo’s dribble bounced over everyone’s heads and into the net to turn Thompson’s trip to the free-throw line into a three-point play.

Hakim Hart had the ball for Maryland on the next possession. He shot the ball from behind the arc, but came up an inch short. The ball bounced high off the rim but dropped into the basket anyways.

The Terps weren’t always so lucky. Maryland gave the ball away four times in less than five minutes — it had just four turnovers in their game against Nebraska.

Wahab had multiple sloppy turnovers throughout the game including two travels and a three-second violation.

Russell also managed a three from the corner. But he stepped on the sideline while he took his shot and the basket was taken back.

The Hoosiers went on a few scoring runs that held the Terps behind. The first one came in the opening half when they took a 10-point lead over an almost seven-minute scoring drought by Maryland.

The drought was broken by a three by Hart. And then the Terps tried to claw back.

Maryland went on an 7-0 run itself through just before the end of the half to get back within striking distance. With five seconds left in the half, Kopp struck for Indiana one last time and the teams went to the locker room close, 30-27.

“What caused us to stay in there was, keep playing for each other, keep having a lot of energy,” Hart said.

Hart’s opening of the second half looked promising for the Terps. After multiple missed shots, offensive rebounds and saves, Hart splashed a three to tie the game at 30 just 25 seconds into the half.

But the second half was much of the same. Indiana took a 10-point lead towards the middle of the half and while Maryland attempted to claw back, it was unable to finish.

The Terps’ defense was their downfall. The Hoosiers shot 75 percent from the field in the second half and made 13 consecutive field goals to separate themselves from Maryland. And a huge part of their success was Xavier Johnson, who went seven-for-seven from the field.

“He had like seven made shots. Whenever you shoot 75 percent in a half, it’s hard to win anywhere,” Manning said. “He shot the ball at a very high clip and when you reel off 13 shots. . . that’s hard to overcome.”

Despite his return to the starting lineup, Ayala’s contributions for his team were minimal. He finished with three points on 1-for-7 shooting and two assists.

Russell, on the other hand, was the highlight for his squad. He was Maryland’s leading scorer with 23 points, but couldn’t keep his team close enough to the Hoosiers.

After they’ve both had success defensively in the Terps’ last few matchups, Hart and Ian Martinez struggled in Bloomington. Hart finished with one steal and Martinez didn’t snag any after they both grabbed four against Penn State.

After being able to control its turnovers in its past two games, Maryland let itself go against Indiana. The Terps gave up 16 turnovers which the Hoosiers turned into 22 points.

With 1:30 left to play, Indiana led by 15 points, its largest lead of the game. Once the Hoosiers took off on their final run, they didn’t look back.

“I thought we competed at times but not enough in this tough environment to get a win,” Manning said. “We have to do a better job of getting stops in the second half. We’ve got a quick turnaround, we gotta get ready for [Ohio State].”