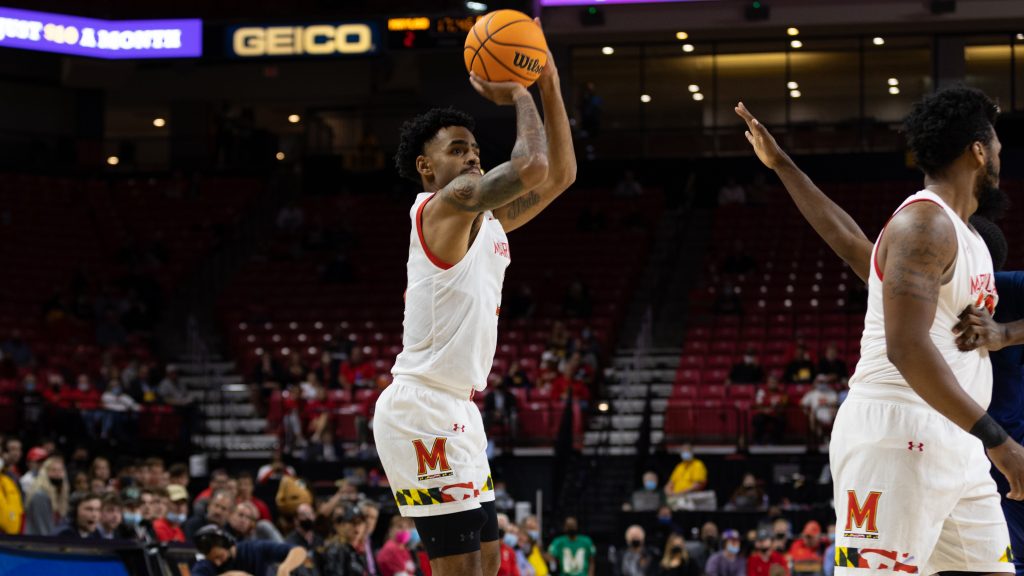 In Danny Manning’s first game as interim head coach of Maryland men’s basketball, he was working without a manual. The team he was abruptly put in charge of had to enter Big Ten play without its head coach of the previous 10 seasons.

That Terps squad showed little improvement on that first night, falling to Northwestern in front of their home crowd.

But what a difference a month can make.

Maryland (9-7) was able to get its revenge and its first conference win of the season off of a career night from Eric Ayala — a collegiate-best 26 points — en route to a double-overtime win over the Wildcats, 94-87.

It wasn’t a pretty win — including a collapse in the final 30 seconds of regulation and two overtime periods — but the Terps were able to shed the burden of going winless through five conference games.

Maryland was off to a typical slow start — but fortunately for the Terps — Northwestern (8-6) was moving just as slowly.

Both sides shot a poor 27 percent from the field in the opening nine minutes. Hakim Hart was the only one finding the net for Maryland early, getting the first two scores of the night on an open three-pointer and a layup.

The rest of Manning’s squad had trouble getting off good shots, if any was made at all.

Four early turnovers, including traveling calls on Fatts Russell, Julian Reese and Xavier Green didn’t help matters. However, the Wildcats did nothing to take advantage of the turnovers, failing to score on the other end each time.

The Terps eventually found some offensive momentum when Ayala went off for seven straight points that gave Maryland its first lead of the night.

“Eric is one of the older players on our team and tonight he gets his first double-double of his career,” Manning said. “He’s made some shots for us, recently, shooting the ball very well from three.“

Donta Scott found Hart with a nice pass in the paint for an easy lay-in that nearly sent the Terps to the locker room with a lead. But Robbie Beran found his own close-range score to set things back to equal for the second half, 30-30.

Maryland hasn’t always been able to take control of the second halves of its conference games, but some strong three-point shooting to start out a fresh half pushed the Terps out ahead.

Maryland strode out to a 44-40 lead after Hart converted on an and-one opportunity. Suddenly, the Wildcats came back to life. Three unanswered baskets from Northwestern kept the Terps from surging forward.

Relying on its veterans, Maryland saw a drive and layup Scott to balance the scores again. A follow-up from Ayala in the form of two makes from the charity stripe and a pair of baskets from deep set the Terps’ offense in motion again.

Scott added another crucial make — following a Russell shot that didn’t fall — and dunking over the outstretched arms of Pete Nance.

Another deep three from Ayala’s hands and a highly contested layup on his next drive to the basket gave Maryland its largest lead of the night, at six.

The Terps took the six-point lead into the final 30 seconds when they began to crumble.

Nance sank a crucial three-pointer and the ensuing inbound was botched giving possession right back to Northwestern. As the referee’s signaled for the Wildcats to regain the ball, Scott was called for a flagrant one foul after a high hit that toppled an opposing player at the top of the key.

After Beran made the two free throws from the flagrant foul, Nance made his own trip to the line, getting Scott to foul out and allow Northwestern to tie the game. Ayala missed the final three to send the game to overtime.

The Wildcats were quick out of the gate in overtime with a layup from Beran and a three from Chase Audige. Maryland stayed in the game from the foul line, between Russell, Ayala and Hart.

“That was big-time,” Ayala said of Russell’s play down the stretch. “We need him…he just plays so hard and competes.”

As time ticked down, Russell dropped another key make while taking a foul to bring the game level at 83. No one could find the go-ahead and the two squads needed double overtime.

The Terps finally found their win on mid-range shooting, with Hart and Russell draining shots from well outside the paint. Maryland just about clinched the game with three offensive rebounds on the same possession in the final minute-and-a-half, burning down extra time on the clock.

Russell sank four free throws in the final minute, bringing his total to 23 points on the night, and the Terps held on for the crucial win after a sluggish start to conference play.

“All of our other games were kind of like this, but we just fell short,” Russell said. “But today I felt like we fought all the way to the end.”