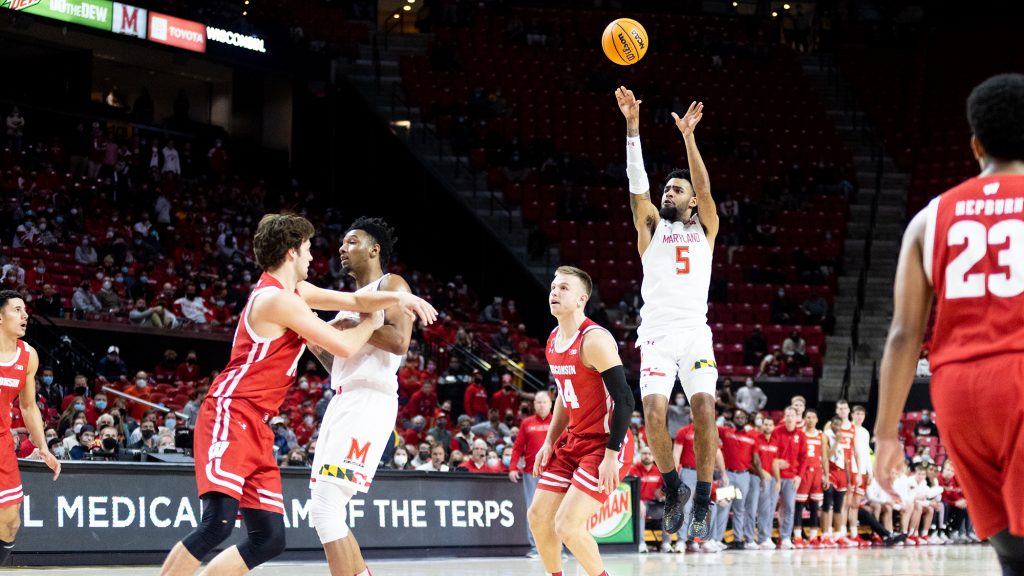 He left the first half of the Terps’ game against No. 23 Wisconsin with a disheartening zero.

Ayala was a nonfactor in the opening half — very well shut down by the Badgers’ defense. But in the second half, he came to life.

After two baskets from Fatts Russell, the fan-favorite ripped into the second period with three consecutive threes. His second three gave Maryland its first lead of the game.

Ayala followed his opening threes with two good jumpers. And his team rallied behind him.

After lagging up to 21 points behind Wisconsin for the majority of the first half, the Terps fought back to a lead in the second half and remained competitive for the rest of the game.

They finished just behind the Badgers and lost the game, 70-69, despite a near-comeback of near-miraculous proportions.

The Terps fell to 0-4 in the Big Ten and Danny Manning dropped to 3-4 as interim head coach.

“We got a lot of fight in our team, it’s sad that we kinda been starting games like that,” Ayala said. “I think we came out in the second half and it’s been kinda like a little trajectory with our team. . . We right there.”

It often takes some time for Maryland’s offense to wake up. Against Wisconsin, it took longer than usual.

The Terps were not making shots, and the Badgers’ defense wasn’t making it easy for them. After playing just over nine minutes, Maryland shot 3-13 from the field and 0-2 from three. Wisconsin also forced multiple shot clock violations and left the Terps confused on offense.

Johnny Davis, one of college basketball’s best scorers, drained 11 points in the opening half. Tyler Wahl was not far behind with nine points of his own — the two combined for 20 of Wisconsin’s 33 first-half points.

Maryland scored just eight points through 11:39 leaving the score 29-8 in the Badgers’ favor. But after that, the pace of the game changed.

Qudus Wahab attempted a layup with Wisconsin’s big — Chris Vogt — all over him. The ball bounced on the rim for an uncomfortably long time. But it fell in.

Xavier Green fired a shot from behind the arc, and the small mid-winter break crowd at the Xfinity Center roared. Green sank another jumper in Maryland’s 15-0 run in his best shooting performance in a Terp jersey, totaling 10 points by the final whistle.

Green also gave an exceptional defensive performance. He held Davis to just eight points in the second half, effectively stifling one of the nation’s top scorers.

“I just knew to be a pest. Everywhere he’s at, I’m there,” Green said. “I feel like I’m a great defender coming off screens and stuff and being there, having a hand, I just wanna be there and contest every shot.”

Donta Scott also found five points in the run and Wahab made two free throws to encroach on the Badgers’ lead. Hart rounded out the scoring for Maryland in the first half with three good free throws to put his team just seven points under Wisconsin.

Manning’s squad continued its dominance from late in the first half when it came out roaring in the second.

Manning’s squad came out roaring in the second half.

Russell clocked four early points to bring the Terps within three points of the Badgers. Brad Davison broke up Maryland’s scoring with a layup. But Ayala wouldn’t take that.

Ayala pulled through on offense and gave his squad its first lead of the game.

However, they lost grip on the advantage a few times.

Wahl, who led his team in points with 21, tore through the paint for a layup to break a 49-49 tie. Davis followed with a bucket to put his team up further.

But Green tied it again. He drained a three, immediately followed by a jumper to even the score at 53.

“My teammates, for real, building confidence in me, getting those passes to me and me being ready to shoot; it all just translated and it felt good out there,” Green said.

Throughout the second half, the game was tied nine times and the teams had six lead changes.

Maryland gave Wisconsin many of its points in the final minutes at the free-throw line. Both teams finished in the double-bonus, but the Badgers capitalized on it better than the Terps.

A pair of missed free throws from Davison in the final seconds gave the Terps one final attempt at a win on a hail-mary shot from Ayala, but it was nowhere near the rim.

Despite the loss, Maryland continued its second-half winning streak. The Terps outscored the Badgers 43-37 in the final 20 minutes, but it wasn’t enough to leave the court with the win. After yet another slow start to the opening half, Maryland’s offense fired on all cylinders and showed the high level of play it is capable of.

“I think we got some grit and some tenacity,” Manning said. “I don’t like it when we give up such an early lead like we did tonight. But we’ve shown that we have the wherewithal to find a way to claw and fight and scratch and get back into the ballgame.”