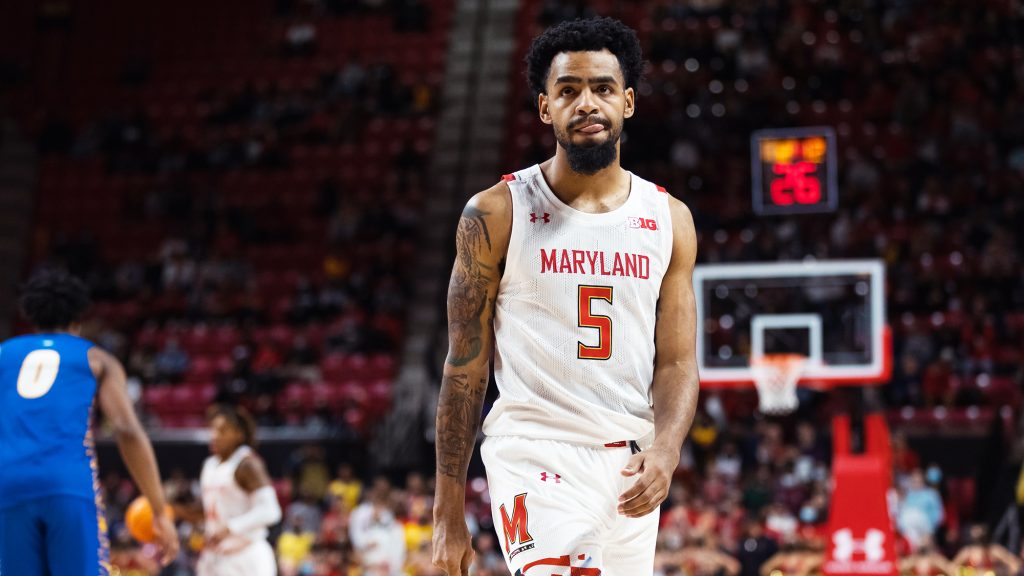 Maryland men’s basketball had a shot to steal a road victory over Iowa, Monday. And all it needed to do was keep the ball away from one player — Keegan Murray.

Murray had scorched the Terps for 35 points, an almost unsurprising total from the nation’s top scorer. But his final basket sealed the Terps’ loss.

With under a minute remaining, the Hawkeyes held a four-point edge and began running down the clock. One more make would likely sink Maryland, but Iowa didn’t dare give the ball to Murray as time ticked down.

Tony Perkins was the one to drive toward the basket, stop, pivot and take the fadeaway shot.

The ball didn’t sniff the rim. It instead landed into the outstretched hand of Murray, who easily placed a short-ranged shot over the heads of Eric Ayala and Fatts Russell to help secure an 80-75 win.

Murray was a menace against the Terps, scoring 35 total points, and he, along with the rest of the Hawkeyes’ relentless offense, highlighted some very real issues in Maryland’s defensive play.

“He did it inside. He did it outside. Had some good blocks, offensive rebounds. He’s the complete, total package,” interim coach Danny Manning said of Murray. “As a basketball fan, I appreciate what he does out there on the court. Just as a fan of the game. We didn’t do enough to slow him down, but he’s a handful.”

The Terps are no strangers to big performances from high quality players. Early in the season, Ben Shungu of Vermont and D’Shawn Schwartz of George Mason each had their ways on Maryland’s home court.

Shungu dropped 27 points and Schwartz scored 24 in a surprise 71-66 victory over the Terps. Most recently, Maryland struggled to contain Brown’s Tamenang Choh who racked up 25 points on Dec. 30.

Although those players didn’t play at Murray’s level, they each gave the Terps a hard time on defense — at least for the first half of their games.

Shungu had those 27 points, but 20 were in the opening half. In what then-head coach Mark Turgeon called one of the best defensive performances he’s seen from one of his squads, Maryland shutdown the Catamounts in the second half and took a win.

The same problem came up against the Bears, where Choh scored 18 points in the opening half. A second-half adjustment saw Hakim Hart take on the burden of guarding Choh and he kept him mostly quiet for the final 20 minutes.

Schwartz had been one of the only opponents to stay consistent against the Terps from half one to two and it led to a win.

But there was little chance at stopping the 2021 All-Big Ten freshman team honoree in Iowa City on Monday.

Murray rocked Maryland with 16 points in the first half and only got better with 19 in the second.

“Keegan Murray is a first-round draft pick. He’s a lottery pick,” Manning said. “That’s what one looks like. We got a chance to see it up close and personal today.”

There was a brief stint in the first half where Murray lost a little bit of his mojo. After subbing back into the game with just over nine minutes remaining, he scored once before missing four straight shots and a free throw.

The Terps moved to a zone defense and Manning said the team managed to throw Iowa off — it missed a few shots it would typically hit after such a strong start.

But even then, Murray found his way back into the game.

“Going into any game, you put together your scouting report, things that you have to be okay with giving up to a certain extent — because you’re not going to take away everything,” Manning said. “Teams are too talented, coaches are too good, players are too skilled. And for us it was, if he’s shooting threes, lets make sure we contest it. He knocked down five of them.”

Murray went 5-of-6 from beyond the arc, but where he and his squad excelled was on the fastbreak.

The Hawkeyes outdid Maryland on points in transition 14 to 5 — an area the team wants to improve on. Those scores for Iowa were often immediately following baskets from the Terps.

“Just running back on defense with urgency,” Russell said. “Sometimes we get lackadaisical when we get a bucket. Iowa is a team where they don’t relax. Once we get a bucket, they [were] right down our throat with the ball.”

Maryland played one of the most aggressive offenses it’s seen this season in Iowa. And it exposed an area that really needs improvement if the Terps hope to make a run in another loaded variation of the Big Ten.

Maryland will get another chance to play Murray and the Hawkeyes on Feb. 10 in College Park. But until then, the Terps have their hands full with upcoming conference competition in Illinois and No. 23 Wisconsin.

“He stayed in rhythm throughout the game. He was a basket here, basket there. Y’know he never really had a drought where he wasn’t in rhythm,” Ayala said. “We’re gonna play him again so I’m sure we’ll have a nice game plan for him.