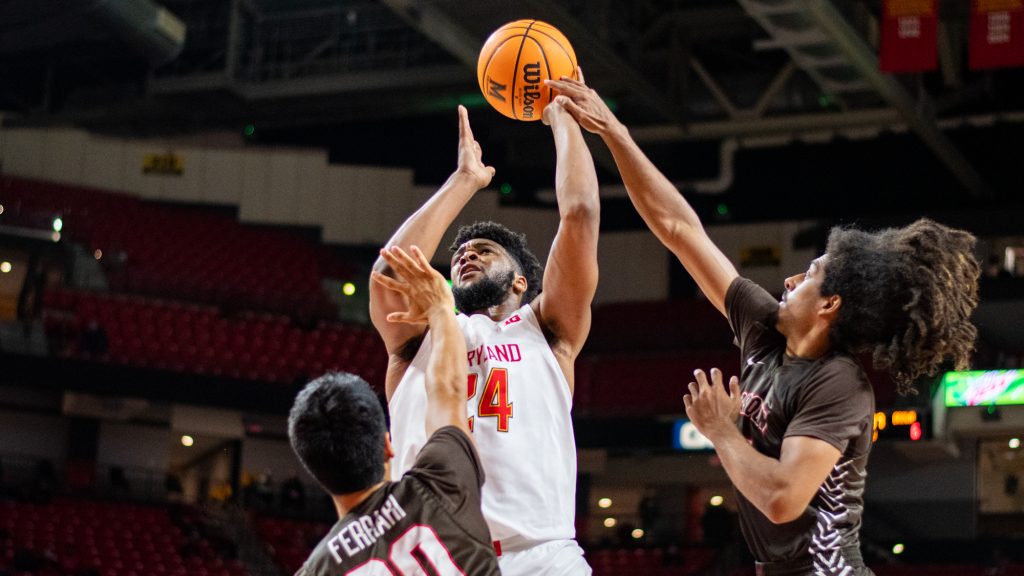 Keegan Murray did what he does best against Maryland men’s basketball — score a lot.

The leading scorer in college basketball, who averages 23.7 points per game, put his average to shame against the Terps.

Murray put a cap on a stunning 38-minute performance with two made free throws and tied his career-high 35 points against a Maryland defense that simply could not keep up with him.

The Terps continued their Big Ten slate with a high-scoring, fast-paced loss to Iowa. While Maryland’s offense shot effectively, the Hawkeyes were consistently faster on both sides of the court — and they topped the Terps in a close fight to the finish, 80-75.

Maryland lost its grip on a three-game win streak and fell to 0-2 in conference play.

The Terps looked slow to start the game. And Murray was dominant to open the match. He dropped 16 points in the opening half — it seemed like he was going to run all over the Terps for 40 minutes.

Iowa’s entire offense was quick to start the game. The Hawkeyes dropped 11 points in less than three minutes and they snagged a lead and held onto it for over 12 minutes.

“They came out early in transition and got some easy baskets. . . they kinda woke us up a little bit,” Eric Ayala said. “We can’t come out lackadaisical like that, especially against [a team] that dynamic in transition.”

But interim head coach Danny Manning’s squad caught up to them. Maryland held Murray without a point for the final 7:29 of the half, which significantly limited Iowa’s scoring ability.

“I thought we did some really good things to battle back into the game,” Manning said. “We threw some zone at them, threw them off a little bit, and we were able to make some plays and get within striking distance.”

While most of Iowa’s offensive production rested with Murray, the Terps’ starters each made impacts on the scoreboard. Ayala led his team with 19 points, followed closely by Fatts Russell with 16. Maryland’s other three starters, Hakim Hart, Donta Scott and Qudus Wahab, all contributed double-digits in the score column as well.

Maryland’s offense fell into a rhythm halfway through the opening period — it shot 42% from three and clocked just four turnovers, a low number for Manning’s squad. The Terps shot forward on an 11-0 run over almost three minutes to put themselves within one point of the Hawkeyes.

But Iowa remained competitive. Filip Rebraca broke Maryland’s scoring run to extend his team’s advantage. Ayala and Julian Reese quickly answered back with a bucket apiece to tie the game at 26 with just over seven-and-a-half minutes to play in the first.

However the Hawkeyes were there to break the Terps’ streak again — still they were not held down. Murray put a swift end to the stalemate before Russell snatched the tie back.

Rebraca took another lead for Iowa. But Maryland did not let it hold on.

Hakim Hart dropped a basket and Russell splashed a three and the Terps snagged a lead they would not let go of in the half.

The play clock ticked to zero and Maryland went to the locker room with a rare lead at halftime, 40-36.

In the second half, Murray opened the scoring and returned to his early ways. He scored 12 points in the first eight minutes of the half and broke a 51-51 tie for his team with a shot from deep.

Later in the game, Joe Toussaint became a factor for the Hawkeyes. Although the night certainly belonged to Murray, Toussaint and Rebraca added some help at the basket, combining for 22 points.

While Maryland had fewer giveaways than normal, Iowa was still able to capitalize on Manning’s squad’s mistakes. The Hawkeyes played fast and well in transition and they scored 14 points off the Terps’ nine turnovers.

“We knew offensively they are an extremely talented basketball team, they got out in transition early. Fourteen transition points for the game is far too many,” Manning said.

And with those points came another significant advantage for Iowa — it was able to grow its lead from one point to 10 points in just under two minutes.

The Terps showed promise yet again. Russell crashed the net for a layup and Scott sank a three to put Maryland back within five in short order.

But it couldn’t hang on.

Missed free throws and slower overall play kept the Terps behind the Hawkeyes. Russell fired a three at the buzzer to bring the score closer, to no avail. Maryland fell to Iowa in dramatic fashion to snap a three-game winning streak and stay winless in early conference play.

The loss was rooted in yet another slow start to a game. And the Terps know they have to fix their opening play to be successful in a competitive Big Ten.

“It’s been a problem for us, how we start the game,” Russell said. “If we clean that mistake up and be in the game, it’s a different game.”