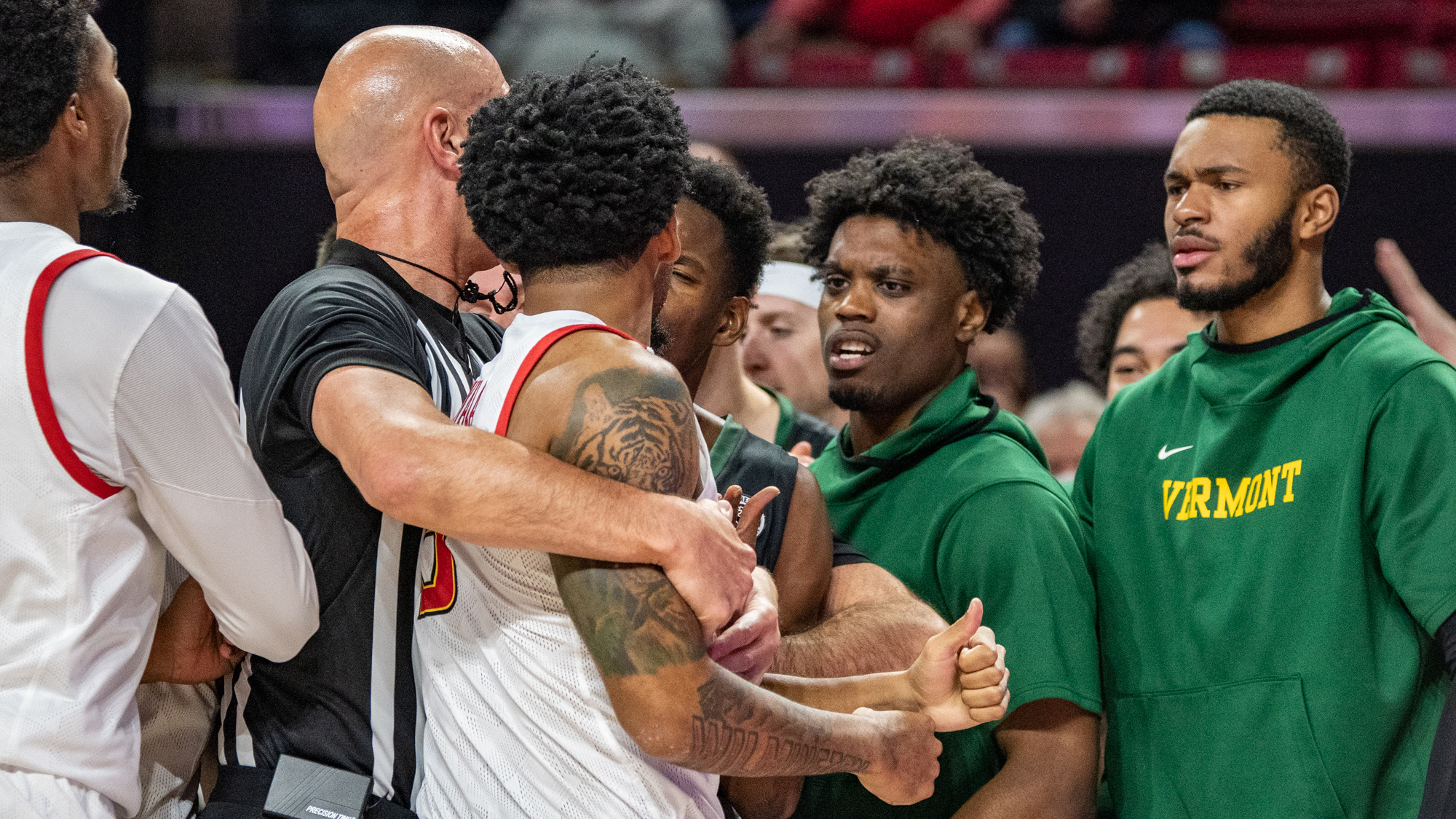 Eric Ayala is held by a referee after a confrontation by the Vermont bench during Maryland men's basketball's 68-57 win over the Catamounts on Nov. 13, 2021. (Joe Ryan/The Diamondback)

Eric Ayala had the basketball in the corner just feet from the Vermont bench. He attempted to dribble the ball, but Robin Duncan was there to cover.

Duncan swooped down to pick up Ayala’s dribble, but Ayala was ready and scooped the ball into his arms. Duncan did the same.

The two scrunched their faces and fought for the ball. Ayala and Duncan were thrown into the Catamounts’ bench where they were both swallowed by a sea of green jerseys.

Coaches, teammates and referees ran over to interfere. Words were exchanged and emotions ran high, but no fouls were called on the play.

Ayala’s scuffle was one of a few contentious moments during Maryland men’s basketball’s Saturday afternoon win against Vermont that motivated the Terps forward.

“The ref said, the first [scrum] in front of their bench, the green shirt pushed us first and Eric just stood up for himself. That kind of got us going, got the fanbase going” coach Mark Turgeon said. “We needed it.”

After a back-and-forth start to the game and about 20 minutes total trailing the Catamounts, Maryland channeled its energy into clawing back the lead.

And once they got it, they didn’t let it go.

After leaving the court trailing 36-32 at the half, Turgeon’s squad made a comeback against Vermont and took the game, 68-57. The high tension amped up the Terps.

“We knew it was going to be a fight,” Xavier Green said of Ayala’s scuffles, “We see the energy that he got, we knew that we had to bring it too.”

Maryland took the lead with 12:48 left in the second half and held it until the end of the game, in no small part due to the intensity of the matchup.

The contest with Vermont was the Terps’ most physical of three games they played this week — the teams finished with 37 combined fouls.

Ayala and Fatts Russell compounded for 44 points and they were the two players who took the brunt of the Catamounts’ physicality. Russell crashed to the ground on multiple occasions after contested shots.

“I try to stay off the ground as much as possible, but the competitor in me will just throw my body into people and just hit the ground,” Russell said.

Julian Reese was also involved in some crashes at the post, bringing the “Baltimore toughness” that Turgeon knows he brings. And the players love to see the fire in their teammates.

Ayala and Duncan maintained their high tensions throughout the game. They got into another skirmish below the basket after Duncan ferociously blocked Ayala’s shot. The two exchanged words and were each issued a technical foul.

And Ayala used the spark from those tense moments to fuel his game — he dropped 22 points in the affair, his highest-scoring outing of the young season.

“[Turgeon] got me fired up before that play. He challenged me in the huddle,” Ayala said. “That play happened and I think we all just kind of felt that energy.”

Turgeon thinks the intensity of the affair with Vermont woke his team up to the realities of the coming season.

And after their adjustment period, the Terps put up one of the best defensive performances Turgeon claims he has seen from one of his teams. But they had to fight through adversity to reach peak performance.

“Our guys don’t know how hard it is to win and how hard you have to play. We learned that today,” Turgeon said. “I thought they pushed us first again. So we’re not going to back down in those situations … [It was] good to see a little fire today.”