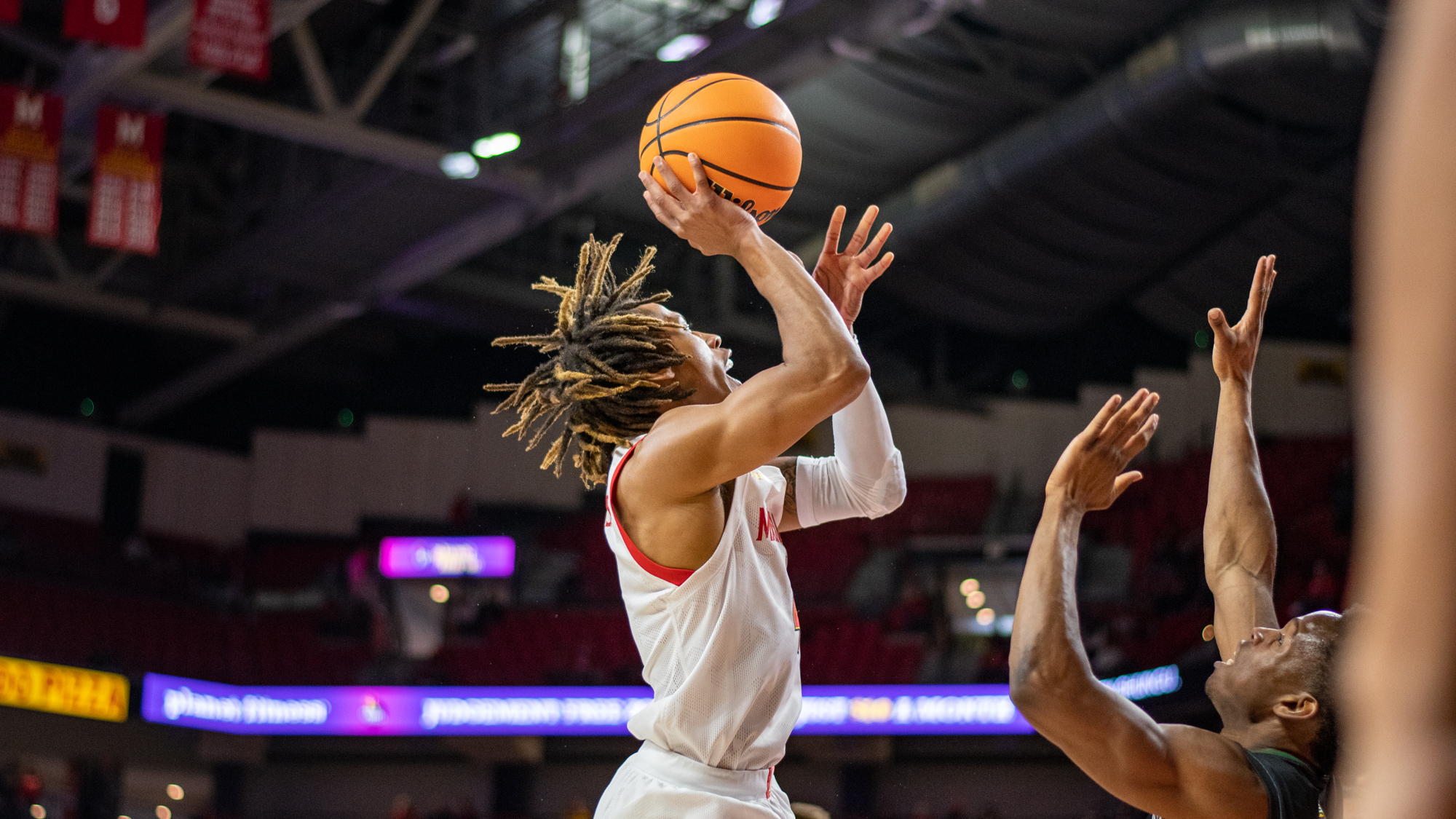 Fatts Russell sprinted down the court on a fastbreak. And when he got to the opposite end of the court — Vermont’s Nick Fiorillo knew there was nothing he could do to stop Russell. He slowed himself to allow Russell to finish a layup at a blistering pace without fouling.

The crowd at the Xfinity Center exploded for a fast fan-favorite and Russell made the most of the moment, taking a small victory lap over to the student section to head into a media timeout.

Russell delivered in key moments once again for No. 21 Maryland men’s basketball, riding a 22-point game to help earn the Terps a contentious 68-57 win over Vermont.

“It’s what he does, man,” Xavier Green said. “It’s why he came here. We knew what he could do with the ball and we put him in the right position to make those plays.”

It was another slow start for coach Mark Turgeon’s squad shooting, going three for their first 11 chances. However, Maryland found help from its starters in Eric Ayala and Donta Scott, who hit four of the next six shots to grow back into the game.

Scott has had an inconsistent start to the season from beyond the arc finishing his third game at .182 on the season. So Scott worked the paint more in Saturday’s matchup.

Although he still shot five threes — not sinking any — Scott took more opportunities to fake his defender on the perimeter and march toward the basket for a hard-fought layup.

“If I had an answer for the shooting, I’d fix it,” Turgeon said. “But they’re good shots. If we’re shooting terrible shots over hands, then I’m worried.”

Meanwhile, Vermont was producing in every aspect of offense, living off of big days from Ben Shungu and Isaiah Powell. The two combined for 41 of their team’s total points.

The Terps ran into foul trouble early, amassing five not even 10 minutes into the half. But as Maryland began racking up fouls, so did the Catamounts. The sides were nearly even with nine for Vermont at the half and eight for the Terps.

And Maryland took greater advantage of the foul situation, hitting eight free throws to the Catamounts’ four in the first half.

Simon Wright, a transfer from Elon, saw some early playing time in the opening half after only logging two minutes against Quinnipiac in his sole appearance.

Wright was quickly called for two fouls — no help to the Terps foul problems — but split the two with a three-pointer that helped Maryland work back out of its shooting woes.

After a history-making first two games from Qudus Wahab, he didn’t have quite the same impact throughout the game, struggling to match with the reigning America East Player of the Year, Ryan Davis.

Tensions began to flare after a jostle for the ball between Ayala and Robin Duncan led to a small shoving match. Although it all led to the Terps getting the ball right back, it ignited extra contention throughout the remainder of the game.

“We all just kind of felt that energy,” Ayala said. “I think we’re so talented that teams are going to try to out-tough us this year so we’ve kind of gotta try and make that statement that we’re not one of those [tough] teams.”

The two would exchange technical fouls and more words following a play late in the second half where Duncan attempted to pull the ball out of Ayala’s hands after a whistle.

While it was clear Maryland was in the game, it still went into the locker room down 36-32 after failing to score in the final 3:12 of the half.

Powell came out with the first basket, sinking a corner three, but the Catamount was quiet for the early goings of the second half.

The Terps owned the first 10 minutes of the second half. Ayala started showing his shooting chops again, hitting on three of his five attempts early on to put Maryland on top.

It was Russell who began amping up the Terps offense with his layup and a later three-pointer that put them up. Maryland wouldn’t trail for the remainder of the contest.

“Our coaches kept yelling at me to keep shooting the ball,” Russell said. “When you have coaches like that…that just gives you confidence as a player. I just love being here, I love our coaching staff, it’s tremendous. All my teammates have tremendous confidence in me.”

The Terps kept a steady lead from the foul line, scoring seven straight points on free throws. Russell finally brought shooting from the field back in play on a made three late in the contest.

Down the stretch it was the defense that featured for Maryland, holding a once red-hot Shungu to seven points in the second half.

“I’ve been doing this a long time, Turgeon said. “That last 10 minutes was as good as one of my teams have ever played defensively and I’ve had a lot of really good defensive teams. That was something else.”

The basket that put the game out of hand came from Russell, once again, as he hit a floater to put Maryland 11 points ahead. Ayala added one more for himself, but the Terps had already separated themselves from the Catamounts and pushed themselves to 3-0.