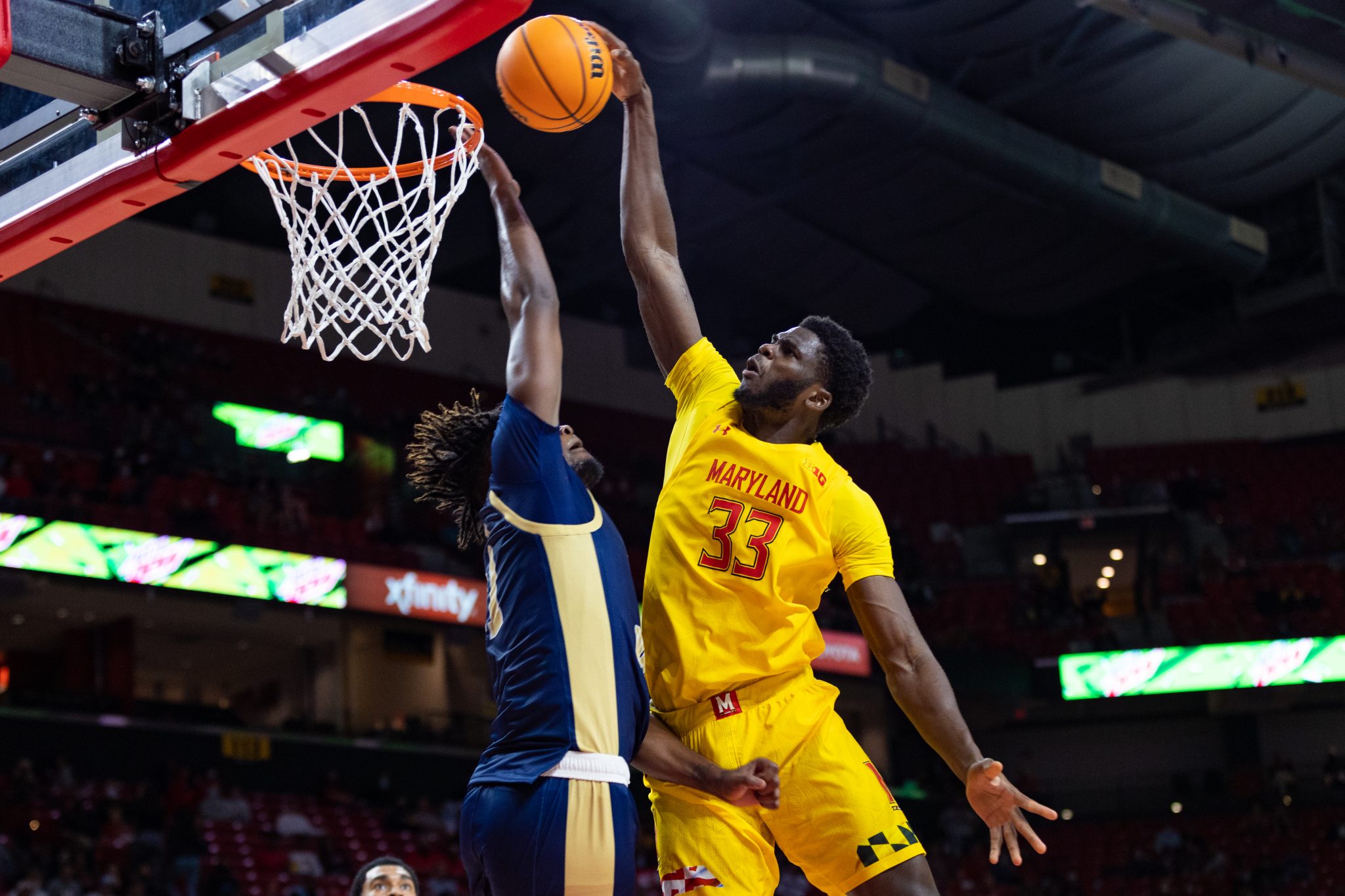 Maryland men’s basketball needed something to start up its offense.

The Terps had been stagnant from outside of the paint and were sitting behind the underdog George Washington Colonials with moments remaining in the first half.

They got the spark — and in emphatic fashion.

Ian Martinez got the ball to Qudus Wahab as time ticked down, with only one defender standing between him and the basket.

Wahab launched forward, finishing a slam dunk over George Washington’s Noel Brown. That dunk brought the loudest cheers to that point from a crowd that had shown weariness they would be in a hole come halftime.

Wahab lifted his chin to the rafters and yelled as he began his jog toward the locker room with a deficit of just a single point.

“I think it really gave us more energy to come out in the second half,” Wahab said.

The momentum rested with No. 21 Maryland the remainder of the way as the Terps took the lead at the onset of the second half and never let it go, escaping the Colonials 71-64.

The first half was defined by a duel in the paint. No one could get it done from beyond the arc — with the exception of Ricky Lindo Jr. who returned to College Park with three three-pointers to his name.

The opening period, both sides combined for 2-17 from three, with both makes coming from Lindo.

“The first half I wasn’t happy with the shots,” coach Mark Turgeon said. “We’ve got two guys that just think it’s about them at the start of the game and it’s not about them. And we’ve gotta get that corrected.”

The Terps got their offense rolling from Eric Ayala, scoring his first of the night on a pump-fake in the paint. Two nights after becoming the 58th player in Maryland history to score 1,000 career-points, Ayala had a slow shooting performance at a .333 clip, though he still found 11 points.

He had his fair share of miscues, like missing two consecutive free throws during the tail-end of the opening half of play when his team had stalled out on offense. He shot over 83% from the foul line last season, but ended up going 1-of-3 on the night.

“He didn’t hang his head. He kept trying, he kept being aggressive,” Turgeon said.

However, the Terps once again found their greatest weapon to be Wahab, who was far and away the most accurate player from the get-go.

Wahab dominated the offensive battle in the post, making all five of his attempts at the basket in the first half, including his dunk to go into the break. He would finish with 18 points and 15 rebounds, his first double-double in a Maryland uniform.

The 6-foot-11 center made history on Thursday, becoming the first player to score 15+ points in each of his first two games with the Terps since Steve Francis did so in 1998.

It was Maryland’s defense that brought it more pain than positive.

George Washington made all of its production from inside. Joe Bamisile carved up Maryland from down low to the tune of 16 first-half points. The only points the Colonials put up in the opening period not in the paint were the pair of threes from Lindo.

Out of the break, the Terps carried the momentum of Wahab’s statement play from minutes before, getting two quick layups from Hakim Hart and Fatts Russell. A pair of free throw makes from Wahab and Maryland looked to be taking control of the matchup.

“We went into the locker room and told each other ‘that’s not Maryland basketball,’” Russell said. “We went at each other a little bit and talked about it and we got it all off our chest and we came out and we were ready to play.”

Just as quickly as they had scored the first eight points of the second half, the Terps saw their lead evaporate after a pair of fastbreaks and a layup from Lindo brought the difference to one.

It was Donta Scott’s turn to shift the momentum, doing it the way he knows best — a three pointer.

After posting a top-five season in three point-shooting in Maryland history, Scott turned the tide of missed chances beyond the arc. His basket elated the Xfinity Center crowd and started building out a lead the Terps wouldn’t relinquish through the final buzzer.

George Washington made valiant attempts at clawing back its margin. An 11-1 scoring run down the stretch brought the Colonials within two. However, well-timed free throws from Wahab kept the lead intact.

And Russell hit the dagger — stepping up as the shot clock wound down — and sinking his first three of the night. He put Maryland out of reach and in the win column despite a George Washington team that took it to the end.

“I’m a big shot-taker and a big shot-maker,” Russell said. “I’ve been doing that all my career. I got a lot of confidence in myself. I seen the shot clock was running down, it was at eight seconds and I went to what I normally do and it went in.”