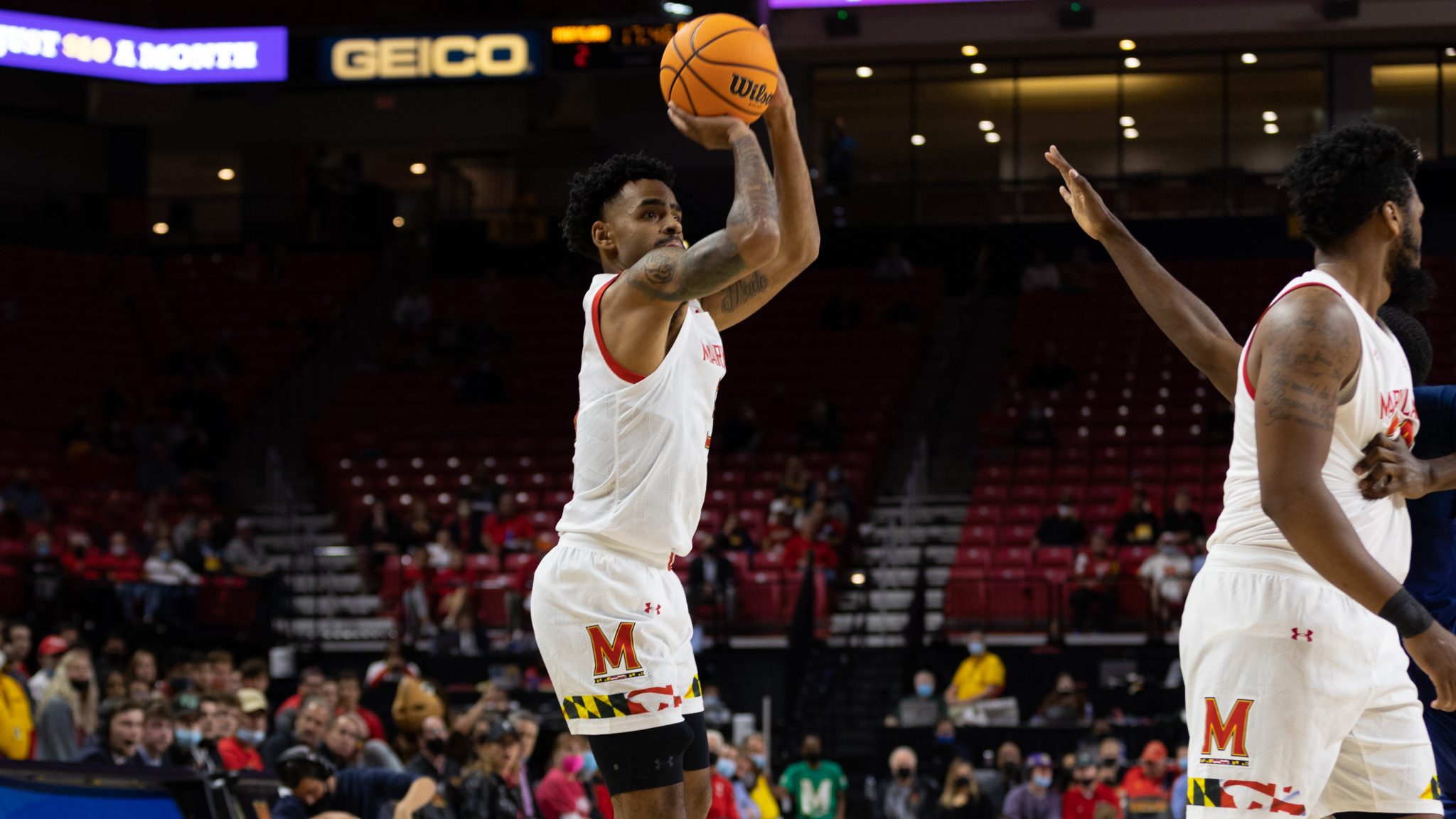 Just minutes before, during his introduction, Ayala turned his back to the student section and screamed into the crowd. The Xfinity Center erupted at the sound of his name.

With Ayala at the foul line, onlookers clapped and raised their hands for the Terps’ free throw ritual. He took his shot and it dropped. The fans who had waited 611 days to see a Maryland basketball game at home celebrated the make that brought the score to 10-5.

But the crowd perhaps didn’t immediately realize the significance of that point. Minutes later, a voice thundered over the loudspeaker and congratulated Ayala for his 1,000th career point in a Maryland jersey.

The crowd exploded in cheers for the fan-favorite Ayala. And they screamed for him throughout the rest of the game. Ayala had a strong performance during the Terps’ 83-69 win over the Bobcats Tuesday night in their first contest of the season.

“Every day I walk in here, I see the guys on the wall in the hallway, hopefully, one day, I feel like I can get there,” Ayala said. “I want to be remembered.”

Quinnipiac played a physical game, clocking nine fouls in the first half and an early bonus for the Terps. The Bobcats continued their physical fight on offense in the second half and they totaled 20 fouls to end the game.

Despite their physicality, the Bobcats couldn’t stop Qudus Wahab. The 6-foot-11 transfer fell into a rhythm early in the second half and was consistently a known presence across the court. Wahab clocked a team-high 17 points.

“I was just trying to be aggressive and do whatever it takes to win,” Wahab said.

Donta Scott and Fatts Russell  followed close behind on the scoreboard. They dropped 13 and  12 points respectively.

As he did in the Terps’ exhibition game, Julian Reese made a big impact. The freshman registered 11 points and pulled down seven rebounds.

Tymu Chenery was sprinting toward the basket in the second half — but Reese wasn’t far behind. He sprang off the court and smacked the ball to the ground for one of his three blocks.

“When he’s fresh, he’s good,” coach Mark Turgeon said of Reese. “He just keeps getting better…He likes to learn, he likes to listen as well.”

Ian Martinez also had a strong showing on Tuesday night. The Utah transfer recovered a Quinnipiac turnover and dribbled into Maryland territory. He launched a long pass to the right of the net and into Scott’s waiting hands. Scott completed his dunk, eliciting a roar from the Xfinity crowd. Martinez finished with eight points and three assists on the night.

Turgeon’s squad held all but two Quinnipiac players to single-digits in the score column. Tyreese Williams scored 19 for the Bobcats’ and Matt Balanc dropped 25.

[Back for more: Veteran players bring experience and leadership to Maryland men’s basketball]

Meanwhile, the Terps put out a spread of offensive weapons, with five players getting past double-digit points.

Maryland wasn’t without its struggles, sloppily giving away 10 turnovers in the opening half. But the Terps played much cleaner in the second, only giving the ball away three times.

After tidying up its play in the middle of the second half, Quinnipiac gave Maryland a hard time to finish the game. With Turgeon’s bench in the game, the Bobcats held the Terps on a scoring drought that lasted 3:40.

The dry spell was broken when James Graham III took to the foul line and his point dropped to add one more score for Maryland. They didn’t register a field goal for the final five and a half minutes of the game.

Maryland may not have performed perfectly, but it got the result it wanted in the first game of the season, showcasing its new talent and its returning veteran leaders.

“An encouraging thing for me. . . we were up twenty-something with five to go, we haven’t played our best, we didn’t play particularly well for us, I didn’t think,” Turgeon said. “We’ve got a lot to do, a lot of games coming up, so hopefully we can get better with all these games coming up.”