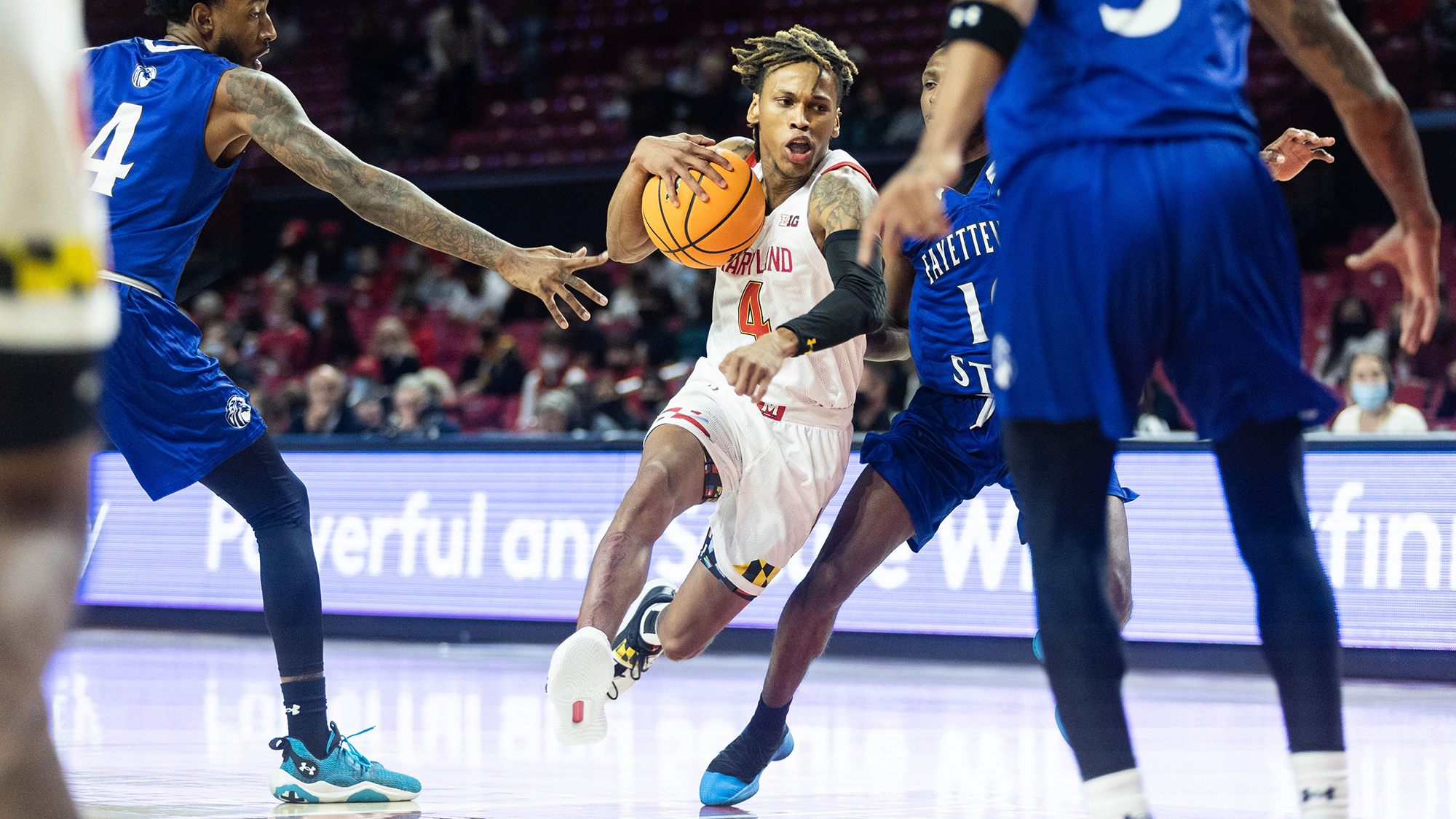 With the opening tipoff just moments away, Eric Ayala turned toward a crowd of Maryland students, and the reaction was instant. The group rose to their feet and erupted as they witnessed the return of a fan favorite to the Xfinity Center.

Although the actual start of the season is still a few days away, Maryland men’s basketball gave the first taste of its new squad Friday in an exhibition against Division II Fayetteville State.

The Terps handled their opponents with relative ease, but they had the chance to showcase a strong frontcourt plus their newest additions and give more clarity to how the squad may look the rest of the season.

Here are three takeaways from the match, which Maryland won, 89-40.

Entering this season, it was obvious the Terps would have plenty of new faces that would need to make a mark to reach the team’s high aspirations.

That impact looks to be immediate.

A trio making their first appearances in Maryland jerseys led the way, highlighted by a banner performance from freshman Julian Reese, with a team-high 16 points.

“[Julian] showed you that he can be a really good player,” coach Mark Turgeon said. “[He] has great hands, can finish around the basket, has great presence about him.”

Reese was a force in the paint, causing problems for the undersized Broncos defense all night long. He, along with fellow newbie Qudus Wahab, combined for 22 points in the paint.

The Terps necessitated building an improved frontcourt over the offseason, and it showed how much of a mark they could make in both scoring and defense.

Wahab, who finished with 12 points and six rebounds, will be first in line at center. But as the season progresses, Reese could find more minutes in the lineup.

“It’s really helpful,” Wahab said of having Reese backing him up. “You can tell from today, he’s ready, and he’s going to be good for us when the season starts.”

[Back for more: Veteran players bring experience and leadership to Maryland men’s basketball]

And though it came as little surprise, Fatts Russell showed why he was so heavily sought after in the transfer portal, playing point guard to a T.

He was the facilitator and the scorer, notching 10 points and two assists in 20 minutes of work. Russell has had to adjust to no longer being the go-to scorer, and it seems to be going well.

“He might be as complete of a guy that I’ve had in a while,” Turgeon said. “He can do it at both ends. He’s really smart. He’s making the right passes, the right decisions.”

Russell said after the game that getting to play around such a talented team is like he’s “in heaven.”

A better look at the pecking order

The first five appear to be locked in for now, with Ayala, Russell, Wahab, Donta Scott and Hakim Hart. But, Maryland showed its hand a bit, rotating in most everyone, with three players first off the bench.

After a full lineup swap five minutes in, Turgeon started mixing Xavier Green, Ian Martinez and Reese into looks with members of the original starting five.

Green offers some of the most experience of the team, and Turgeon has said will be key to the Terps’ defensive development.

After his opening night game, Reese is already being considered for more time. But for now, Maryland is content to have him bring size to the second unit.

And Turgeon said he expects Martinez to be playing “starter minutes,” which he considers at least 20 minutes per game. He played just under that against Fayetteville State and showed energy on both ends with five points, four assists, two blocks and two steals.

“He’s pushing me every day in practice,” Russell said. “I get to see him more than a lot of people. [Today, people] got to see how good he is.”

The Terps got to mix in almost the entirety of their bench toward the end of the contest,  popping the modest crowd in attendance when transfer Simon Wright and freshman Brett Karkus each hit three pointers.

It gave spectators a better idea of who will be next up after the top five leave the court, but it still appears there is time to be distributed.

[Building a contender: Transfers feature in the new iteration of Maryland men’s basketball]

Still dusting off the cobwebs

Despite the enormous reception for Ayala, he didn’t have the electric night most fans would’ve expected. He still tallied nine points, four assists and a team-leading 10 rebounds — but he did so on 2-for-11 shooting.

Ayala and Scott didn’t feature prominently against the Broncos, but they weren’t needed with how strong the squad around them played.

“They didn’t have to tonight, which is a good sign for us,” Turgeon said.

Maryland was sluggish to start all around. Turgeon said, with how deep the squad is, he was expecting more energy going up and down the court. But he said his team looked better in that aspect in the second half.

“At first, everybody has those nerves coming into the game,” Russell said. “After I got dialed in and our guys got dialed in, kind of just started to feel more comfortable.”

The first half wasn’t overly convincing, despite a 43-23 lead. But the second half brought a much more well-executed offense that Turgeon lauded. He said they are in a great spot in that regard this early in the season.

Turgeon did harp on his squad’s rebounding — even though the Terps won the boards battle, 51-26 — saying that outrebounding a smaller team like Fayetteville State should’ve been a given.

“We’re not a great rebounding team yet,” Turgeon said. “Our defensive rebounding can get better.”

Bonus: Ian Martinez really wants to dunk on someone.

The Utah transfer looked to make a statement early in the matchup after finding himself in the open court with no defender in sight. Martinez went up for the dunk, but the ball popped out of the net to the chagrin of every Maryland fan in attendance.

He tried again later in the game with the same result. He did draw a foul, but the big play still didn’t come to fruition.

However, his athleticism was no surprise to his teammates, who have been impressed by his ability.

“I don’t wanna disrespect anybody, but he’s the most athletic person I ever been around,” Russell said. “I’ve never seen anybody jump like him before. Sometimes when he’s just doing his thing, I’m a fan.”