Back for more: Veteran players bring experience and leadership to Maryland men’s basketball 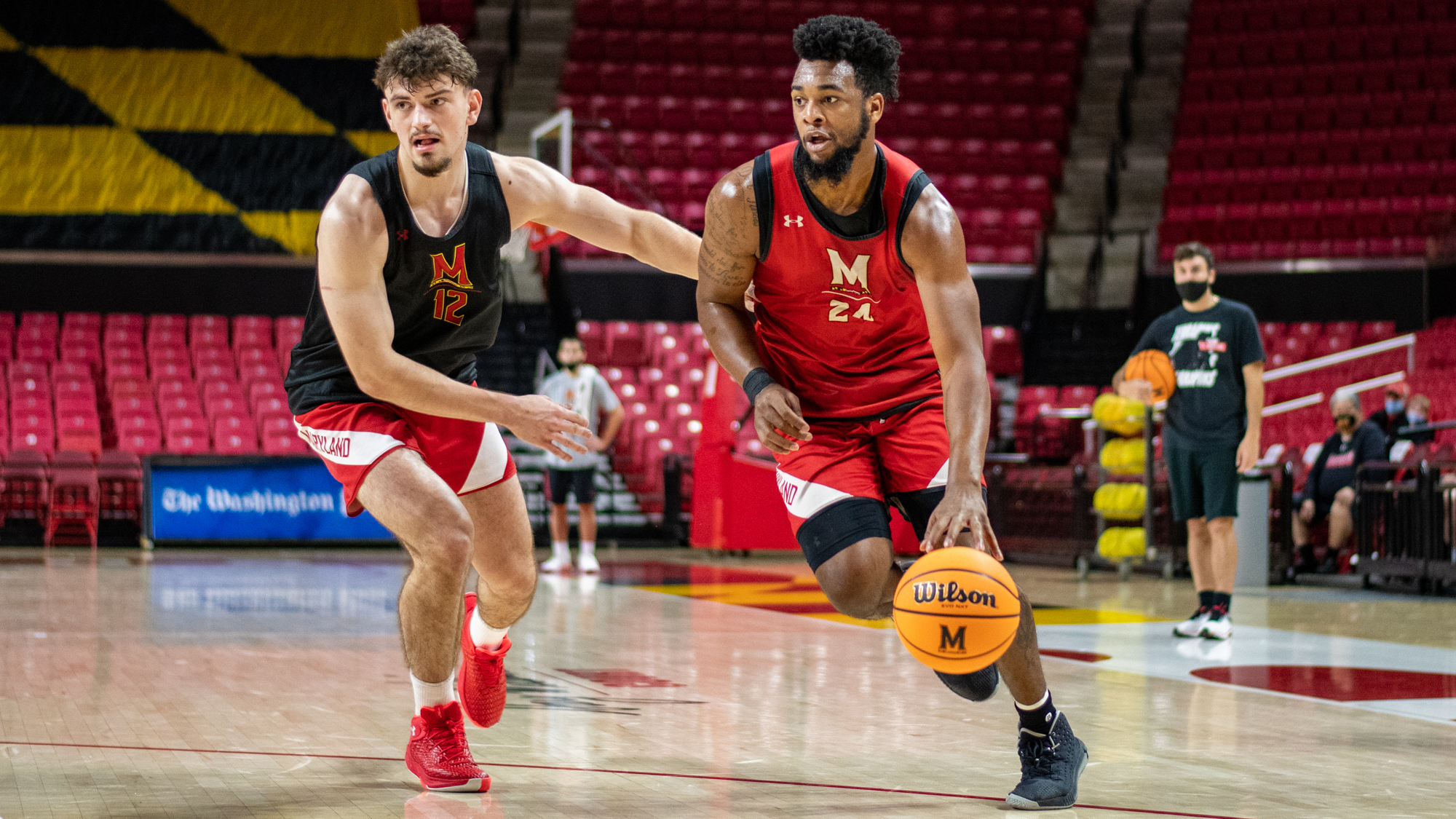 Donta Scott runs with the ball during an open practice on Oct. 31, 2021. (Joe Ryan/The Diamondback)

When Eric Ayala and Fatts Russell are in the weight room together, they talk about having never made it past the opening weekend of the NCAA tournament.

The guard tandem has their sights set high this season and they’re using the promise of a deep run in the tournament to motivate them during their final seasons in college basketball.

“We evaluate each other off of, ‘do we feel like this is Final Four energy?’” Russell said. “If we don’t have that energy, [we] stop it.”

Ayala delved into the NBA draft process over the offseason, but instead returned for another run with the Terps. He said he learned a lot while looking into the world of professional basketball.

“Going through that, I got to learn a lot about my game,” Ayala said Oct. 12.

He said that he learned where he needed to improve to play to his full potential if he were ever to take the court in the NBA. But for now, he’s focused on the team coach Mark Turgeon has assembled in College Park.

There’s one thing that’s certain — this is Ayala’s team.

The senior has been a cog in many strong Maryland teams with the likes of Anthony Cowan Jr., Bruno Fernando, Jalen Smith and Aaron Wiggins.

The only difference is that Ayala is now the frontman.

While Turgeon was incredibly active in the transfer portal, it’s the returning players that will lead a highly-touted and more athletic Terp squad.

Ayala isn’t the lone member of the squad bringing back a Maryland track record.

Donta Scott and Hakim Hart are the two most experienced members, outside of Ayala, to have donned a Terps jersey over the last few seasons.

And with the trio entering this year with more tools in their chest, they have the chance to raise their team to new heights.

“Donta’s gotten a lot better,” Turgeon said. “Eric was humbled through the NBA process, so he’s hungry. Hakim’s put on about 15 pounds of muscle, he looks like a whole different player.”

Ayala began to really find his legs last season with no clear superstar on the roster in the pandemic-riddled 2020-21 season. He averaged a team-high 15.1 points per game and became the clutch player down the stretch.

In the final four games of the season — two Big Ten tournament and two NCAA tournament games — Ayala averaged 19 points and 6.3 rebounds. He took a noticeable step forward in leading a Maryland team that went in with less hype than previous seasons.

Now, with his stock as high as it has been in his collegiate career — earning a spot on the Jerry West Award 2022 Preseason Watch List — he gets to make his mark on Terp basketball while prepping for his future.

“He realized there were some things like leadership, being more consistent, becoming a better defender,” Turgeon said of Ayala’s return to Maryland. “I think it’s the best thing for him.”

For Scott, leadership has come to the forefront of his impact on the Terps. It was clear at the team’s media day he had already become one of the primary leaders in the squad.

As the team went through an open practice, Turgeon stopped the team midway through a drill. But it wasn’t Turgeon that did the coaching.

Scott was the one to step forward and walk Qudus Wahab through what the drill was supposed to look like.

“That’s part of his leadership, that’s part of his growth and his maturation that now he’s becoming that extension of coach Turgeon,” assistant coach Bruce Shingler said. “He’s talking, he’s leading. When things are going the wrong way he’s grabbing guys and putting them together.”

A member of the Karl Malone Award 2020 Preseason Watch List — an award ultimately given to the top power forward in the nation — Scott’s ability on the court is well known. He has good size at 6-foot-8 and displayed his strong three-point shot, making 43.8 percent of his attempts, fifth all-time at Maryland.

But his leadership is principal as the Terps bring in a new-look squad between transfers and young players.

Hart has arguably done the most personal work over the offseason. Turgeon proudly said Hart had put on 15 pounds of muscle the past months. And it shows.

While his stats don’t scream success yet, his coaches and teammates are confident in the steps he has taken as of late.

“He’s a very smart player,” Scott said. “He has [pushed] himself over the year to get stronger. It’s a slow process but it’s getting there.”

With his physical transformation and additional year of experience, Hart knows he has begun evolving into a leader on the team.

“My leadership has developed on the court, talking more on defense and offense. Just making sure the younger guys know what they’re doing. ”

And the Terps have their fair share of young players, with James Graham III, Julian Reese and Pavlo Dziuba — who all turned 18 over the summer — looking to become helpful pieces to the team.

Previous seasons Maryland has been a pleasant surprise in the tournament or even a serious threat to go for its second national championship.

“We’ve had some teams that overachieved that made the tournament and won a game, probably weren’t supposed to,” Turgeon said. “We’ve had a team or two that didn’t go as far as we thought.”

But Turgeon has no reservations that this team, led by its veterans, can make the deep run they’ve wanted for years.

“I think this team has a chance to do that because we’re gonna be a little bit deeper, a little more experienced.”