Building a contender: Transfers feature in the new iteration of Maryland men’s basketball 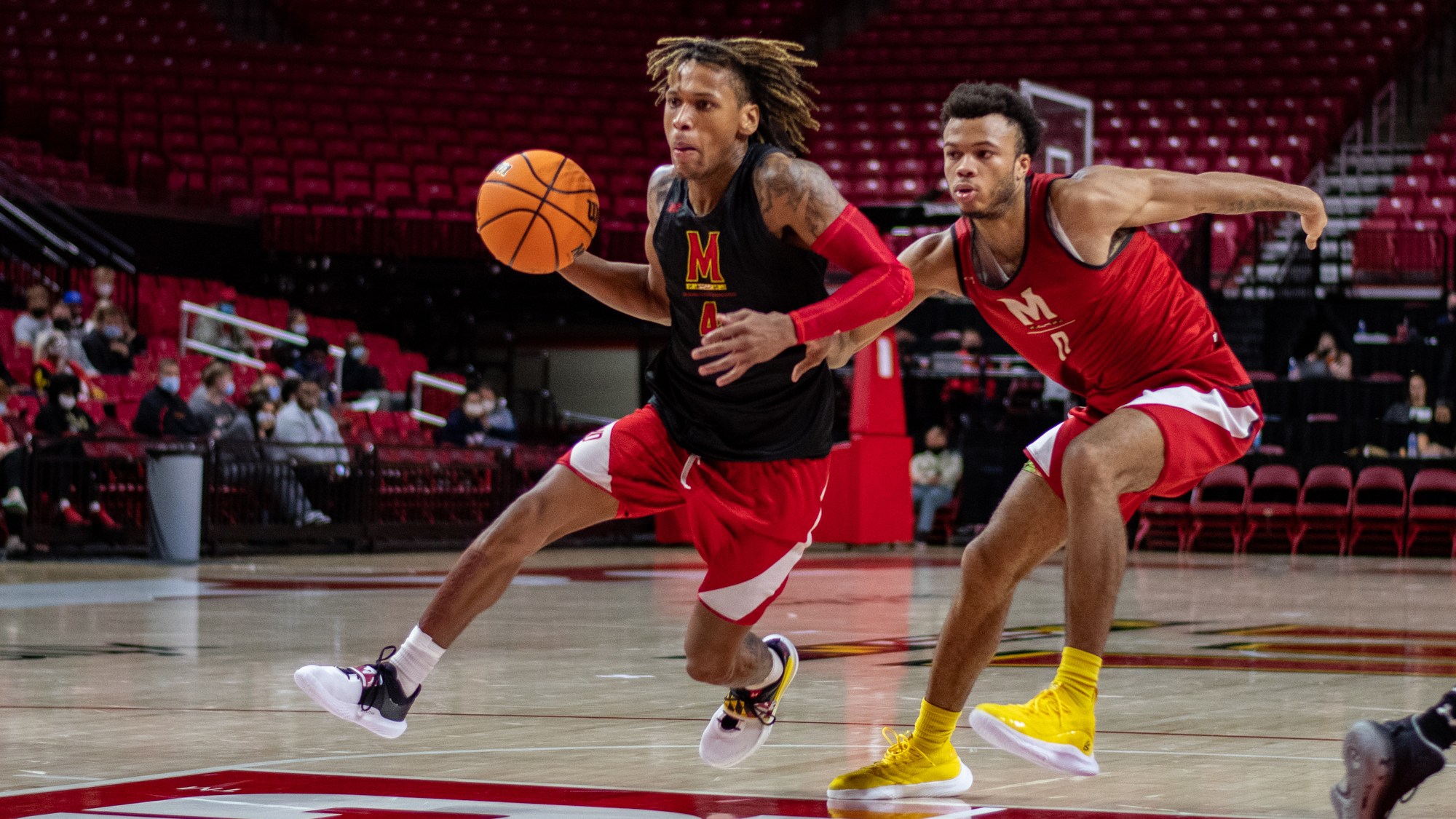 Guard Fatts Russell runs with the ball during an open practice on Oct. 31, 2021. (Joe Ryan/The Diamondback)

Only seven of the 16 players on the Maryland men’s basketball team wore Terp jerseys last season.

Of those seven, only three averaged more than five minutes per game. Despite that, Maryland finds itself ranked No. 21 in The AP’s preseason Top 25 poll — even with the departures of 2020-21 Big Ten Defensive Player of the Year Darryl Morsell to Marquette and Aaron Wiggins to the NBA draft.

This can be largely attributed to the stacked transfer class brought in by coach Mark Turgeon.

In the past, there was a looming uncertainty regarding the portal due to inconsistencies from the NCAA on what should grant a student-athlete immediate eligibility, presumably dissuading many from entering. With this no longer being a fear, its role in building a roster is different — and Turgeon knows that.

“The portal’s definitely changed, everything’s about the student-athlete, and guys were able to leave and go right away,” Turgeon said. “It’s part of our game, it is what it is. We want to blend it, we still want to sign some high school players, but we want to make sure we can add players to make us good.”

The class is highlighted by Russell and Wahab, who are expected to start at point guard and forward, the Terps’ two most glaring holes from last season.

And the portal brought them the height they desperately needed with Wahab as a long and physical true center and Dziuba, who’s 6-foot-8 and a strong player. Adding those two alongside 6-foot-8 Donta Scott and 6-foot-10 Julian Reese offers plenty of new physicality.

Out of the nine Big Ten teams that finished the season with an overall winning record, Maryland snagged the second-fewest rebounds due to the void of that true center. The 6-foot-11 240-pound Wahab, who averaged 12.7 points, 8.2 rebounds and 1.6 blocks per game in his sophomore season at Georgetown, should change that.

The other four ranked Big Ten teams — No. 6 Michigan, No. 7 Purdue, No. 11 Illinois and No. 17 Ohio State — have top returning scorers Hunter Dickinson, Trevion Williams, Kofi Cockburn and E.J. Liddell who do most of their damage in the post. With the addition of Wahab, the Terps should be better suited to rival that this season.

On top of an anchor in the paint, Maryland was also missing a true floor general last season. Thankfully for them, that’s what the team is getting in Russell, who had plenty of ties to the Terps before signing with Maryland.

Russell was a teammate of Scott in high school at Imhotep Charter in Philadelphia and played against Hakim Hart, a fellow Philadelphian and Eric Ayala frequently. Assistant coach Matt Brady recruited Russell out of high school when Brady was a member of La Salle’s staff.

A two-time All-Atlantic 10 team member, Russell comes into College Park with a new role. A lot of weight was on his shoulders to score the ball at Rhode Island, where he scored 14.7 points per game last season and 18.8 as a junior.

Now, with plenty of other weapons alongside him, Turgeon hopes to see him flourish as a distributor.

“Fatts played at a lower level [at Rhode Island], had to do a lot of scoring. One of the things we talked about when we recruited him, he didn’t have to score as much here– he’ll have nights where he scores, but make guys around him better, and he’s very good at that,” Turgeon said.

While he may not have to rely on his scoring as much, Russell still can put the ball in the basket when need be. But one of the determining factors of his role as a scorer will be his ability to shoot from beyond the arc.

Last season, that’s where he struggled, only sinking 24 percent of his attempts from beyond the arc compared to 36 percent from his junior season. Now though, he feels much more confident from range.

“Coming to College Park, my shot was kinda streaky, but now I feel like every time I shoot it that it’s going to go in. That’s all praise to [assistant coach Matt Brady], ‘shot doctor’ is the right word for him,” Russell said.

With Russell, Wahab and the rest of Turgeon’s additions, some of the Terps’ returners should be able to go back to a more natural role.

Scott, a power forward with a smooth stroke from deep, won’t be forced to reside in the paint as much, on offense or defense.

Senior guard Eric Ayala, the Terps’ leading scorer last season will be able to adjust back to more of an off-the-ball or two-guard role as Russell will take care of much of the ball-handling.

That, coupled with previous relationships and a good mix of personalities are large reasons why the Terps are confident in their chemistry so early on.

“I feel like I’ve been playing with them for so long. We’ve got a lot of guys from the same area. Like Fatts [Russell] coming in, I’ve been playing against him my whole life almost, so our chemistry just clicked automatically,” Ayala said.