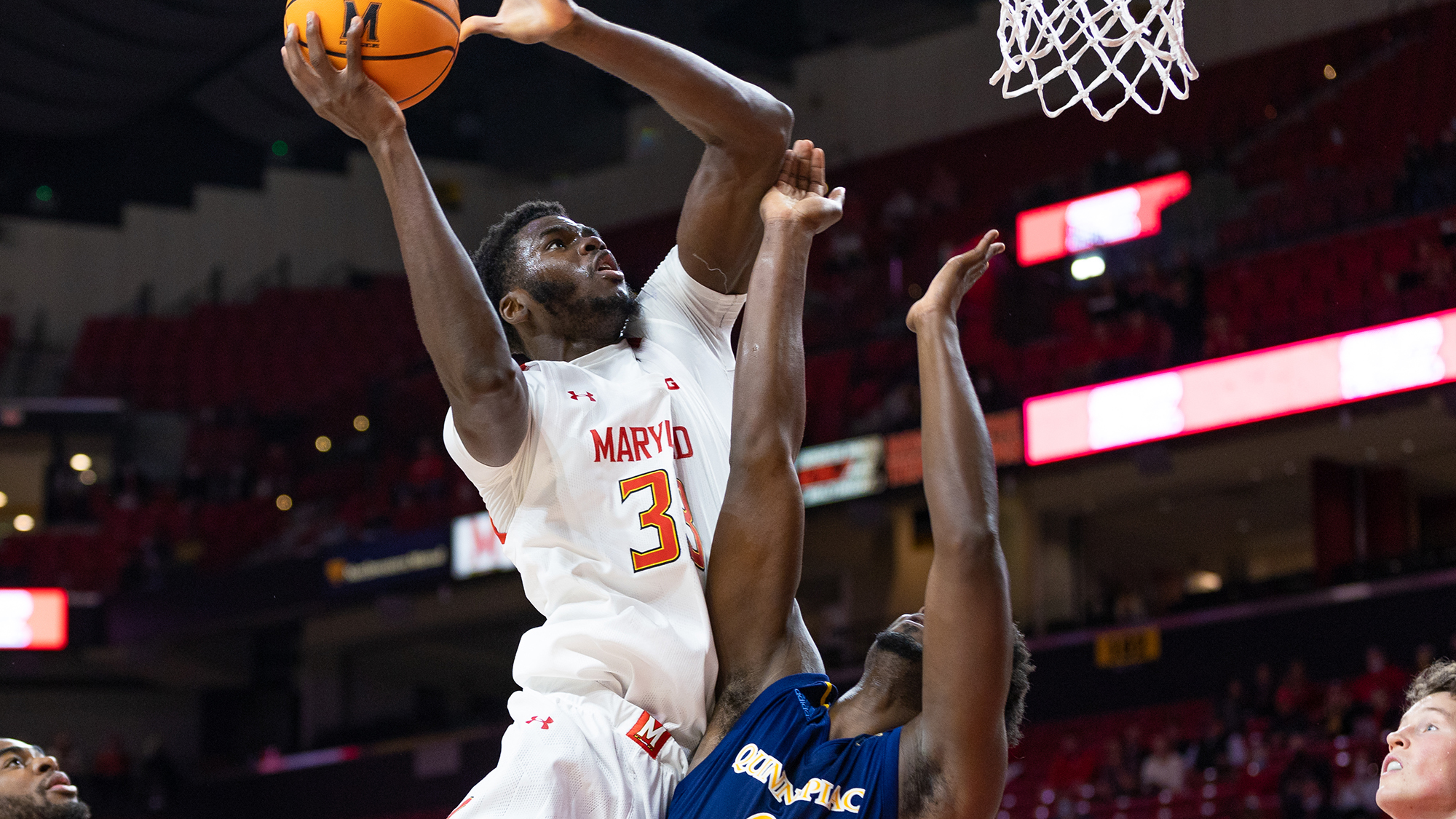 Qudus Wahab goes up for a shot during Maryland men’s basketball’s 83-69 win over Quinnipiac on Nov. 9, 2021. (Cam Andrews/The Diamondback)

On the first play of the second half of Maryland men’s basketball’s 83-69 win over Quinnipiac, Hakim Hart dished a bounce pass to Qudus Wahab.

The 6-foot-11 center faked a pass, dribbled once and then rose for a jump shot well out of Marfo’s reach. The shot landed perfectly in the basket, a welcome start for the Terps’ offense out of the break.

An unusually quick timeout after the play gave coach Mark Turgeon a chance to get his team’s attention that a few players had actually run the wrong play.

It was an odd change of pace — but it did nothing to halt Wahab’s momentum.

He scored the next two baskets and nine total points in the first five minutes of the second half, controlling the paint for the rest of the evening. Maryland’s newest big-man was the star in his first game, amassing a team-high 17 points along with six rebounds and two blocks.

The addition of Wahab as a force at the post is something the No. 21 Terps desperately wanted to address over the offseason. Wahab came highly-touted from Georgetown and gave Maryland more of the same in his first appearance.

Last season, Maryland struggled without a true center to take on a Big Ten conference that has some of the best big-men in the country. And Turgeon has not been wary about the fact that the Terps were not built to handle those teams.

With former Maryland players such as Bruno Fernando and Jalen Smith moving on early to the NBA, the lack of a strong defender with the height to make plays on opposing centers and dominate in the paint defined the 2020-21 season.

Although the season is young, Wahab already looks like the answer — simply having his presence has brought relief to the Terps in the low post.

“We couldn’t do that last year,” Turgeon said. “It’s nice, we can just call a play and throw it in there.”

Wahab had a solid first half, getting six points and two rebounds in eight minutes of work, but two early fouls made the Nigerian rethink his game plan to take back control of his space under the net.

“In the second half I came out with a mindset to be more aggressive,” Wahab said.

That early barrage of shots in the second period started separating Maryland even further from Quinnipiac as it cruised toward victory for the majority of the half.

After the Terps’ sole exhibition game against Fayetteville State on Friday, the excitement surrounding Wahab was already growing with a 12-point six-rebound performance. However, he had an even more confident showing against the Bobcats, particularly when it came to shooting.

“I’m not trying to underestimate the team, just trying to be aggressive,” Wahab said.

It looks like there will be a plethora of Maryland players who could lead the team in points on a given evening. Five Terps — Wahab, Eric Ayala, Julian Reese, Fatts Russell and Donta Scott — all had double-digit points.

But having Wahab as that extra piece at the five this year is paying early dividends offensively for Maryland.

It may come as little surprise he’s got a strong shot — he was .591 from the field with the Hoyas last season — but getting to see it work in the Terps offense offers a lot of potential as the season begins to unravel.

“We always say, ‘Do what you do at practice,’ I feel like that’s what [Qudus] does,” Scott said. “He doesn’t try and step out of his box or step on anybody else’s toes.”